It happened overnight, the shift from fall to winter. The rains came hard and heavy, temperatures turned chill, windows were closed for the first time in months, thick waterfalls streamed down the face of Makaleha, Waialeale completely disappeared.

Suddenly, everything felt alive again: lush, fresh, clean, rejuvenated. And the steady drip, drip, drip of water from the eaves provided the most soothing of lullabies. Welcome back, rain!

I don’t have much time, so I’ll just let you know that Caren Diamond and I will be on KKCR from 4 to 6 p.m. today. In fact, Caren just called because a Newell’s shearwater went down in her yard. This is the time when they’re heading out to sea, and these dark new moon nights are when they’re especially vulnerable to light attraction. So keep your outside lights off, your curtains drawn and be on the alert for fallen birds when you’re driving, especially around river valleys, or if you hear your dog barking. If you want more info on what to do and where to take them, check out the Humane Society website. And no, Caren wasn't doing anything "wrong." She just happens to live near a nesting area.

Getting back to the radio show, for the first half hour we’ll be talking with William John Cox, a retired Los Angeles County prosecutor and a former police sergeant with the Los Angeles Police Department, who is a member of Law Enforcement Against Prohibition. We’ll be discussing what happened with Proposition 19, the failed ballot measure to legalize marijuana in California.

Coincidentally, a friend sent a link this morning to this story about a tunnel that was found connecting Mexico to the U.S., with some 20 tons of marijuana inside. She added the message:

And she doesn’t even smoke. She’s just practical and sensible.

The rest of the show will be devoted to some of our newly elected officials calling in to share their thoughts on what the next term holds. So join us at FM 90.9, 91.9, 92.7 or on line at KKCR.org. The other Out of the Box hosts, Jimmy Trujillo and Jonathan Jay, will also be in the studio.

In the meantime, if you’re interested in how the Army has does business, check out my article on how the Nuclear Regulatory Commission reacted to plans to build an $80 million Stryker Brigade training facility on land now contaminated with depleted uranium at Schofield Barracks.

Finally, in the every picture tells a story department, the debris deposited by Tuesday’s big surf makes it pretty clear that Joe Brescia incorporated a good chunk of public beach into his front lawn, even with a 60- to 70-foot setback. And to think he wanted to build just 31 feet from the water! Heck, he should be grateful to the beach preservationists for saving him from that folly. 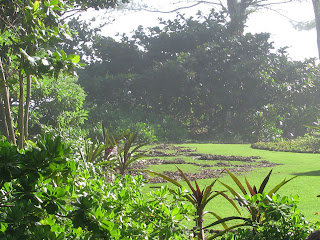 Doesn't it mean that everything makai of the high water mark is public?

Public shoreline extends to highest seasonal wash of the waves.

One question that would be great to ask the newly elected, is if they would consider a bill to deny funding to the nuisance green harvest harassment!

other than storm and seismic waves

The waves on tuesday were a normal seasonal swell, not storm or seismic, which must be a named storm. The waves in Haena are annually recurring, world famous waves, and Tuesday's probably won't be the highest of the season ... it's just the beginning of winter in a place known for high um spectacularly high surf.

"which must be a named storm."

"everything makai of the high water mark is public?"

sure - just go and lie on his grass and tell him you are on public property.

Thanks for the link to the enlightening DU article. Did't they deny there even was DU here until just recently? .

You're welcome. Yes, the Army denied there was any DU at its Hawaii facilities until Earthjustice came across email correspondence acknowledging that it is present here in the Islands.