Though it was too cloudy to see the whole scene today, the planets are doing a nice pre-dawn line-up, with a waning moon cuddling close to Jupiter on Saturday morning, before moving on down the line to Venus on Monday. These are also the peak mornings for checking out the Perseid meteor shower. Might be worth getting out of bed early to make your wish on a “falling star.”


We'll know soon enough whose political star is rising or falling. So until then, let's talk about quirky stuff, like the really trippy cloud action lately. Just lie down on the grass for a few minutes and take a look.

Or check out the new Homeland Security video on how to “survive an active shooter event.” Yup, seems the land of the Second Amendment has gotten so out of control that the feds are now educating the average office worker on how to act when the shooter comes calling. Note: the answers are run, hide, fight, which apparently does not include pulling out your concealed weapon and shooting back.

Sample narrative: “The authorities are working hard to protect you and to protect public places. But sometimes, bad people do bad things. You need to be prepared for the worst.” Sample stereotype: Woman gets hysterical and men protect the group.

Then there's the “counter drug coordinator of the National Guard,” which I think is supposed to reference someone fighting drug use, as opposed to coordinating drugs on the counter, who is hosting an event aimed at "working toward an alcohol and drug free state of Hawaii." Wow. Now the “war on drugs” folks are trying to get rid of legalized alcohol, too. Give 'em an inch and they'll take a mile. But apparently they missed the irony in staging it at an Oahu Zippy's — a chain that serves alcohol at some of its outlets.

The Big Pharma legal guys, meanwhile, spent 19 times more promoting their products than on actual basic research. As a result, their revenues climbed more than $200 billion between 1995 and 2010. And they, unlike cannabis minister Roger Cannabis, whose bid for bail was denied once again, are running free and laughing all the way to the bank.

In environmental news, the National Marine Fisheries Service is ignoring the plight of the Hawaii false killer whale, even as its own new studies show the population can sustain just nine fisheries deaths each year, but longliners are killing an average of 13. I think that's what's known as being on a trajectory toward extinction while the feds look the other way.

Oh, and I noticed a Facebook picture posted by a Kapaa man who requires a wheelchair. It was taken beneath a sign on a section of the Path that prohibits wheelchairs. Wow. So we're spending millions per mile on the Path, and it's not even fully ADA accessible?

Meanwhile, a woman in China affixed a scantily clad blow up doll to a tree in hopes of slowing traffic. Here, we just endlessly tear up the roads and have the politicians hold sign.

And finally, as our exploration of Mars continues..... 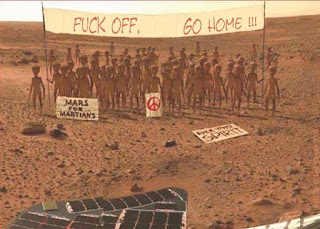 Actually the Feds did consider adding a section on the armed citizen responding. It was ultimately decided against because only 3% of adults are legally armed in public, and many not in the places where such events tend to happen, such as restaurants, theaters, schools, and hospitals where legal firearms are prohibited. People who are legally armed tend to obey the law. Further, other citizens would not know who was armed and most States require classes to teach conceal and carry permittees the proper response anyway.
In Hawaii firearms are allowed to protect a place of business if deadly physical harm is present.