We left high-tech Hyderabad and traveled 144 km to the farming city of Warangal, a 90-mile drive that took three hours along roads choked with buses, motorcycles, scooters, taxis and cars. We passed monkeys, cows wandering on dusty streets, water buffalo being driven to the fields, small herds of goats, the occasional bristly-haired black pig rooting in a garbage pile and the ever-present dogs of India. 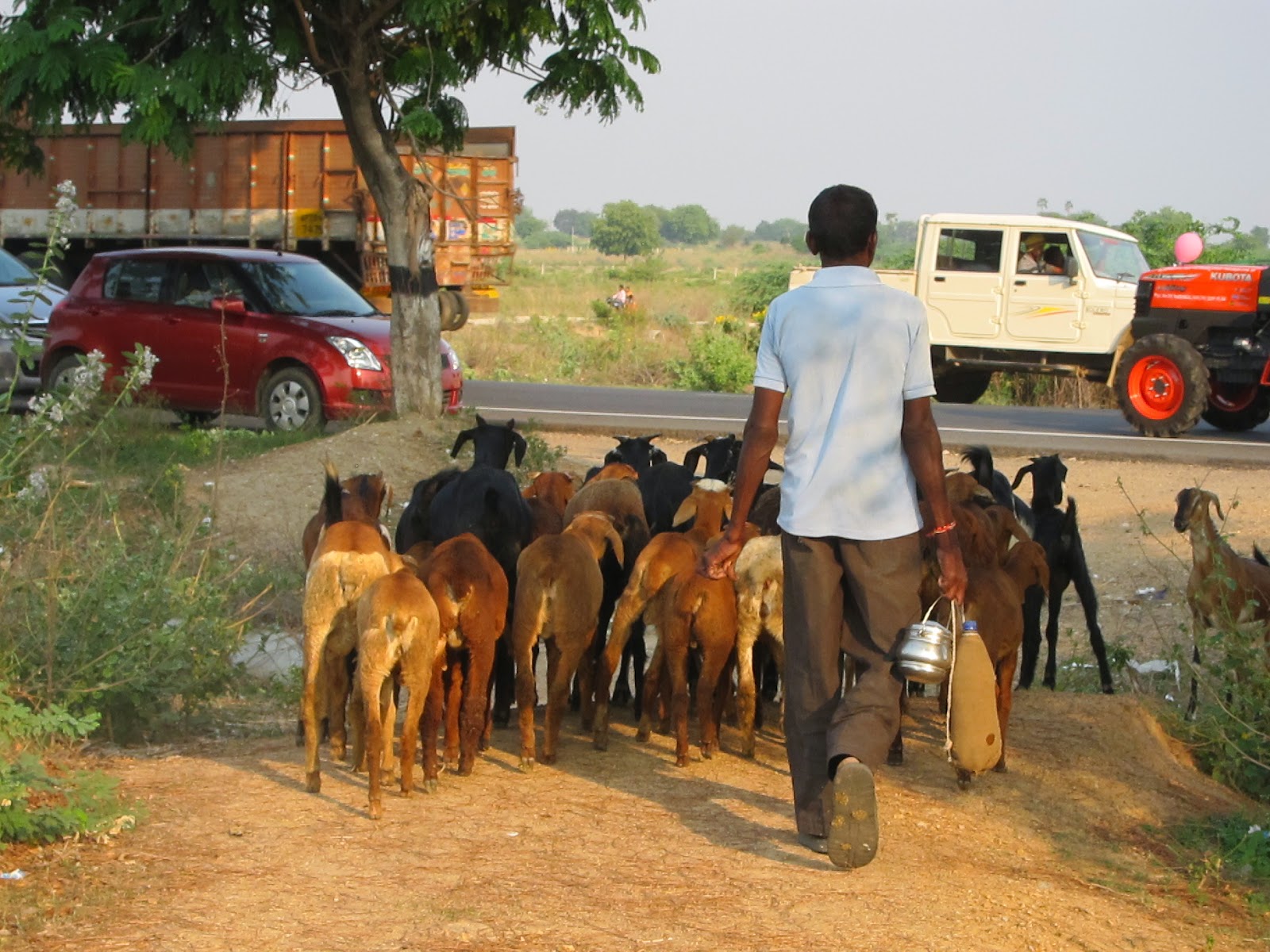 But though agricultural is predominant here, and many of the villagers lack running water and indoor plumbing, high-tech has arrived in rural India. Cell phones and smart phones are ubiquitous and 100 percent of the farmers in this district have adopted Bt cotton — the only genetically modified crop currently registered for commercial use in India. It was engineered by Monsanto to resist bollworm, a major cotton pest that reduces both yield and quality.

We stopped and spoke with a number of farmers, most of them barefoot, who were growing cotton, maize (corn), turmeric and paddy (rice) on five-to-10-acre parcels. We wanted to understand the challenges they're facing, and whether Bt has worked for them. 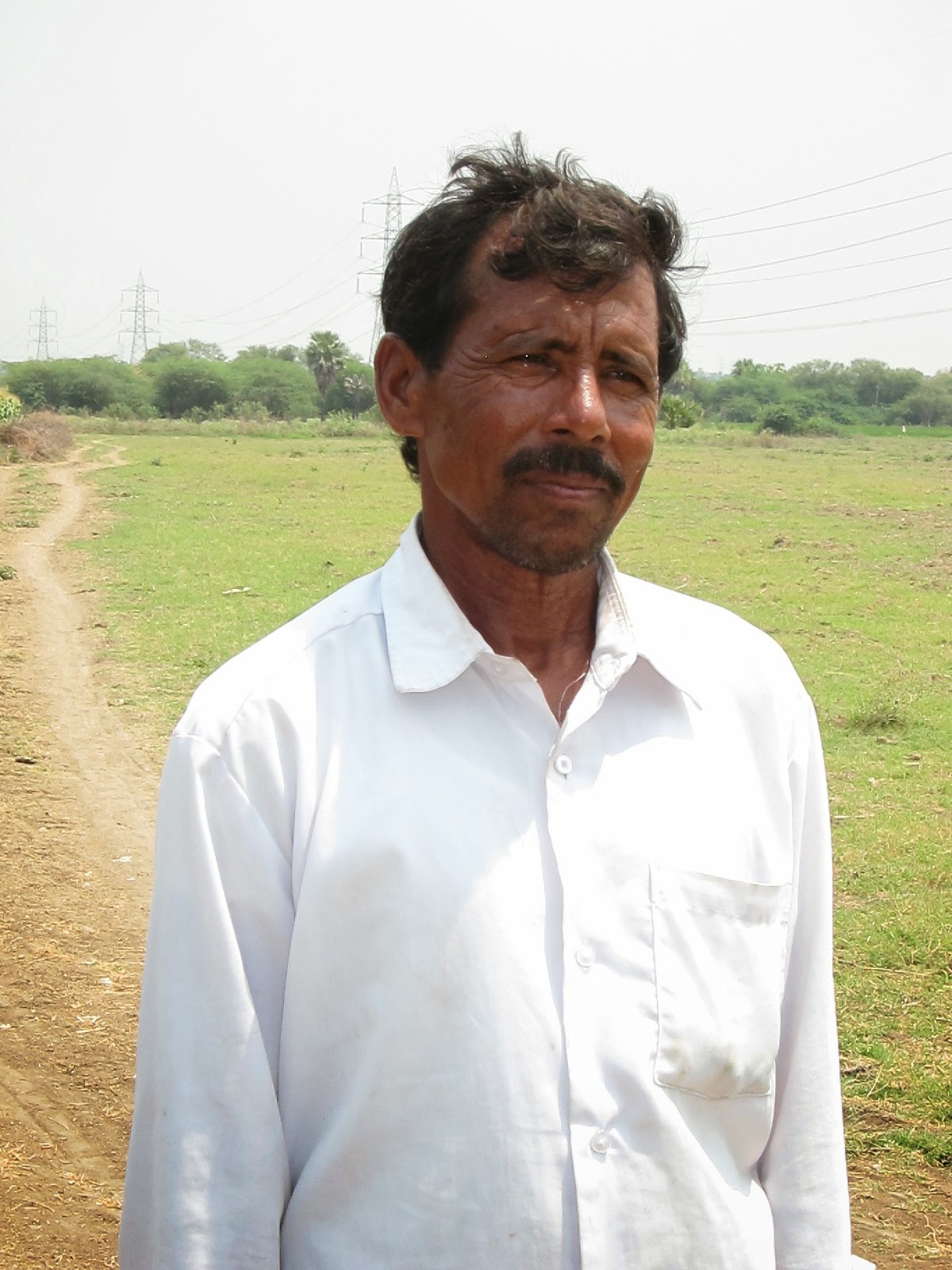 Like other small farmers in India, they apply pesticides using a backpack sprayer, with no protective clothing or gloves. In the days before Bt cotton, they sometimes sprayed pesticides weekly for the duration of the six-to-eight-month crop, and reported burning eyes, respiratory problems and hospital visits seeking treatment for pesticide exposure.

Since adopting Bt cotton, their spraying has been dramatically reduced, with subsequent improvements in health. Their incomes also have been boosted, due to lower expenditures for pesticides, bigger yields and better quality cotton that fetches a higher price.

A man who has been farming for 30 years said the per-acre value of his production has increased 15-fold ((corrected) since shifting to Bt cotton, and his health has similarly improved. 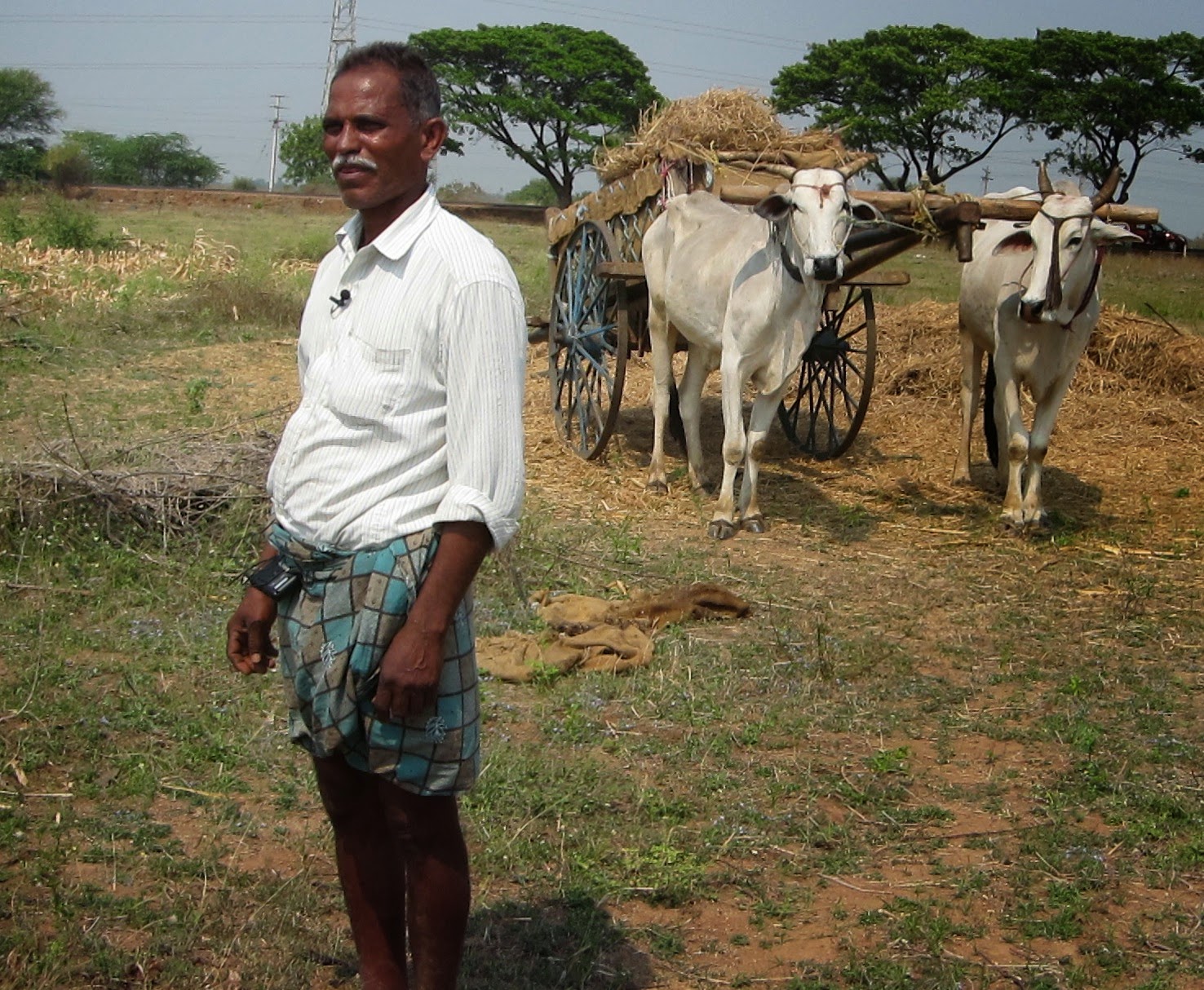 Prior to Bt cotton, he was investing $10,000 annually in his cotton crop, for a return of just $7,000. Faced with such ongoing losses, he says he would have shifted out of agriculture and sold his land if Bt cotton had not been introduced.

A father-son farming team, with 55 years of experience between them, asked for more research to develop a strain that will resist other pests, along with bollworm. Their revenues have increased because Bt cotton is a shorter crop than conventional cotton, so they are able to take a second crop of watermelon, which helps to offset increasing labor costs.

As rural folks move to the cities in search of opportunities, more money and easier work, farms are left with a shrinking labor pool to pick cotton and control weeds that grow quickly in the semi-arid tropical climate. The father recalled that in his time, laborers used to beg him for work. Now, he says, he must beg them to work. Though the corn harvest has been mechanized, the cotton is plucked by hand.

One farmer said he was a frequent visitor to the hospital, due to pesticide exposure, and lived on credit, constantly in debt. But since he began growing Bt cotton on his 10 acres of land, he no longer has health problems and has been able to save enough money to invest in land in the city.

A couple who grow cotton, maize, paddy and sorghum said the profits earned from cotton have allowed them to send their children to school, cover the earthen floors of their home with stone, plaster the walls and eat better rice. Their economic situation used to be very uncertain, even critical, they said, but now they can manage with the proceeds of Bt cotton. 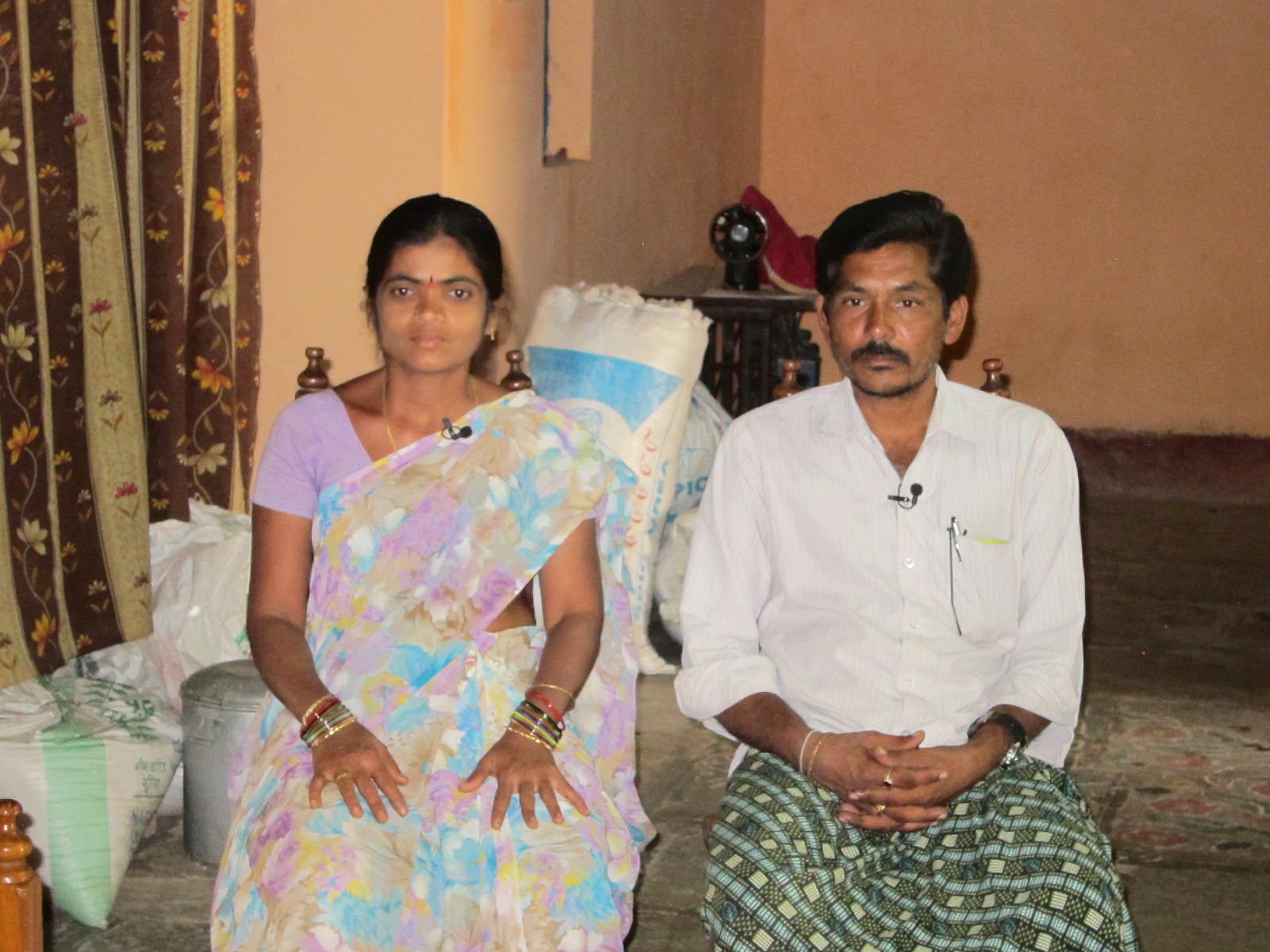 They are also able to afford liquid propane for cooking, which has been a major boon to their lives. Previously, they had to gather firewood, which is hard to find, or use cow dung.

Cooking outside over an open fire was horrible, the wife told me, grimacing and shaking her head. The food often burned and they had many problems from breathing the smoke. She smiled as she lit the two-burner gas stove to prepare us masala chai, a fragrant tea common in India.

As I sipped the tea, sweetened with hand-ground sugar cane and whitened with buffalo milk, I surveyed her neat, humble home, the hand-dug well in the courtyard where they still draw water. I couldn't help but contrast the simple existence of these villagers to the comfortable lives enjoyed by anti-GMO activists in Europe and the United States. 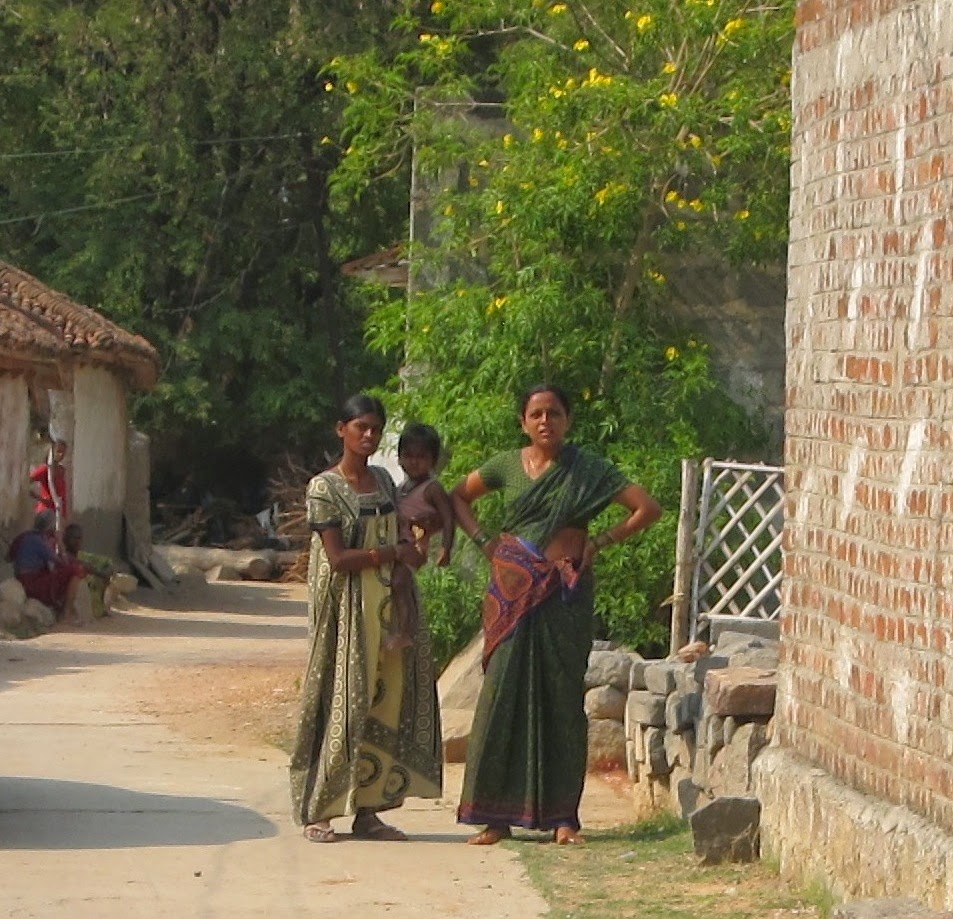 And that got me wondering why the activists want to deprive the rural poor of a technology that has greatly reduced their pesticide exposure, improved their quality of life, given them enough money to purchase school uniforms and tuition for their children. 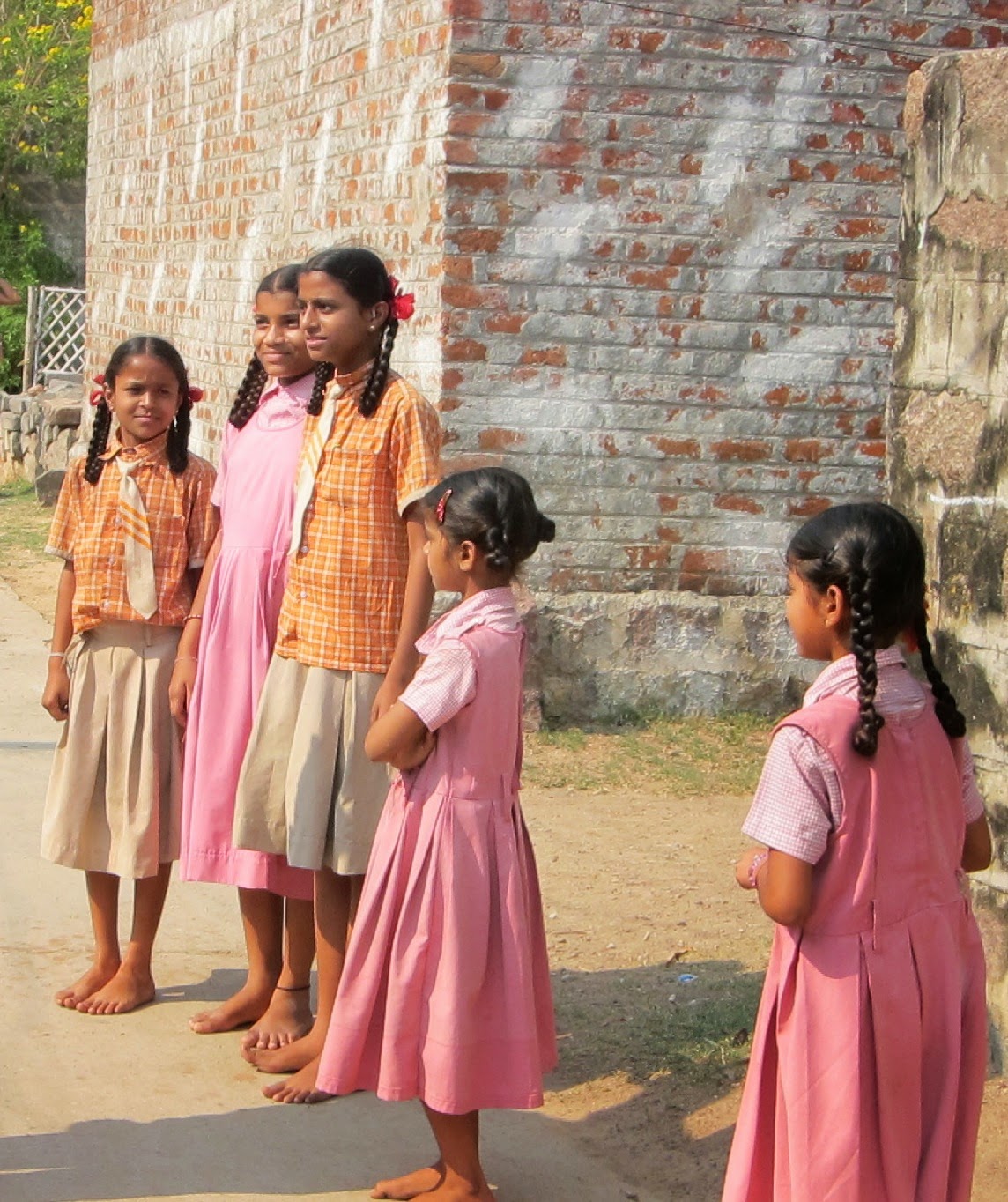 Do they just not know how their anti-GMO activities are playing out in the world's poorest regions? Have they so romanticized subsistence farming that they wish to doom others to endure it forever, while they enjoy every modern convenience and luxury? Are they simply ignorant about the realities of Bt cotton in the field?

Has their demonization of "Monsatan" blinded them to any possible scenario other than the one of pure evil and mass destruction they've envisioned?

Surely, it can't be that their ideology has trumped their decency — or worse, that they just don't care.
Posted by Joan Conrow at 7:52 AM

Monsanto appears to be mana from heaven to these farmers. Who is this "we" you speak about?

So glad you are in the field reporting, the schoolgirls look so happy, neat and clean and India looks so different and interesting. Happy travels!!

It was ever thus--"enlightened" Westerners making decisions for third world citizens, as if they were incompetent to make their own. Christian missionaries did it a century ago. And today it's the Center for Food Safety and Big Organic.

It is incredibly sad that the "enlightened" celebrate denying Indian farmers the technology they need. It is ironic that one of the largest opponents of gm technology in India is the country's pesticide industry, which stands to lose BIG if more gm crops are permitted. Bt brinjal is just one example.

The anti crowd supposedly hates corporations and pesticides yet when it comes to India they happily benefit from the pesticide manufacturers lobbying efforts.

Massive reduction in pesticides and rising income. Had there been bt Cotton, might not have had need for that pesticide plant in Bhopal...

Yes, gm foods must be banned...

In India, Bt cotton has been enveloped in controversies due to its links with seed monopolies and farmer suicides. Bt cotton accounts for 93% of cotton grown in India. Just as Roundup ready crops lead to the growth of supper weeds. The over use of these engineered seeds will lead to super insect pest. The state of Maharashtra has banned the sale and distribution of Bt cotton in 2012, in order to promote local Indian seeds, which demand less water, fertilizers and pesticide input.

10:32. Your comment is misinformed on several points. First farmer suicides are linked to overall debt and crop losses in rainfall dependent regions and Bt cotton per se has nothing to do with it. Such losses are more likely in the future as climate change shifts rainfall patterns. Second, the ban was linked to licensing issues with Mahyco and disputes over the reasons for cotton crop failures in 2012, and it immediately resulted in seed hoarding and black market seed trading at higher prices because farmers wanted Bt cotton. Third, there are no existing Indian varieties that require less water, fertilzer and pesticide. Public sector universities have been working to develop region specific varieties since even before Bt cotton came on the market, but they are not yet available because seed development can take a long time. These varieties may well be genetically engineered. And fourth, the ban was lifted for the 2014 growing season due to farmer demand for the seed.

How do we all come to grips with reality, do GMO crops result in more or less pesticide use and what are the facts?As long as you are on a mission that info would be so helpful . Make sure to enjoy the food and Chai along the way too!

You may want to compare these pictures to the ones in your story.
http://www.theguardian.com/global-development/gallery/2014/may/05/india-cotton-suicides-farmer-deaths-gm-seeds

12:59 -- I do not dispute that some Bt cotton farmers are having problems. Some farmers are borrowing money at high interest rates to lease more land to raise Bt cotton, and if the crop fails due to weather problems, or the prices drop, they do have difficulties meeting their loans, with sometimes tragic results. Bt cotton does not protect against poor business decisions.

Farmers do buy seeds, pesticides and fertilizer on credit, but it's at no interest, and they do this for all their crops, not just Bt cotton.

Some farmers are spraying heavily for bollworm because they are not leaving 5% of their land in other crops, as recommended, to give the bollworm another host. You can't force farmers to follow directions, especially if they're trying to maximize production.

Cotton pluckers hired by small cotton farmers do make $1 to $2.50 per day, depending on the season. And no, it's not enough money, but it's the only work they can get. As I mentioned, they're now earning more, because demand for labor is higher as more farm laborers move to the cities.

Bt cotton does not require irrigation or any more fertilizer than non-Bt cotton, as the Guardian incorrectly reports. If used properly, it requires significantly less pesticides, so expenses are lower, while yield and crop quality are higher, earning them more income.

If Westerners are concerned about the plight of India's cotton farmers, the answer is not banning Bt cotton. Instead, they should pay more for the cotton clothing they consume and urge the US to stop subsidizing American cotton farmers to create a more competitive global market. That would help India's farmers get more money for their crop, which is what every farmer told us they want.

What is health of BT cottonpickers?

It's better because they are not exposed to so many pesticides. The Bt isn't harmful unless you're a bollworm. It's embedded in the DNA of a cell. You dont have contact just by touching the cotton boll.