The Kauai County Council has an executive session with the County Attorney today, seeking advice on hiring a new County Auditor.

Let's hope their next pick performs better than Ernie Pasion — a former County Clerk who lacked a CPA, but got the job, anyway. That hiring debacle cost the County over $400,000 in legal fees to negotiate a $300,000 settlement with Ernie, who sued when the Council tried to fire him.

The Auditor's job pays $114,000 per year. Surely the Council can find someone who is qualified — and not politically indebted or connected — for that kind of dough. The voters approved an Auditor's office because they believed it was needed. They deserve much better than they've gotten for the past six years.

So the Hanalei School principal has been removed in response to protesting parents who felt their kids deserved better. Per usual, a number of parents dragged their keiki — some as young as kindergarten — to the sidewalk spectacle. According to The Garden Island:

[Julie] Mai said before she brought her children to the rallies, she made sure they understood what was going on.

“They knew that we were bringing awareness to the community,” Mai said. “I told my girl, the whole point is helping people understand what’s going on. I don’t think having them out there with us was a negative thing at all.”

Yes, picket signs painted with "Lisa Must Go" and "We Need Answers" are such an effective way to ensure people get a solid grasp of complex issues. And five-year-olds are so akamai about personnel issues, classroom sizes and school funding.

People, if you want to protest stuff, fine. But leave your kids out of it. You're just using them as puppets to parrot your own views.

Meanwhile, Scott Enright, the director of the state Department of Agriculture, was quite frank about why anti-GMO activists weren't invited to speak at the National Association of State Departments of Agriculture meeting on the Big Island: the participants deserved better. As Scott told West-Hawaii Today:

Rather than a balanced discussion of an issue they were already familiar within their home jurisdictions, the association’s secretaries, directors and commissioners were seeking specific information about the Hawaii cases, Enright said.

That’s because the cases could set a precedent for how things are handled in their own counties and municipalities, he said.

Yup, folks, there's a lot at stake in the Hawaii GMO debate, which is why industry and activist groups are spending big here to influence it. And others are just trying to capitalize on it: 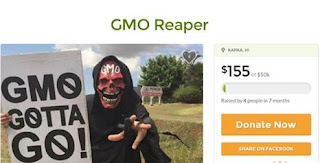 GMO battles in Hawaii will shape the authority of state and local governments to regulate biotech crops in the seven states under the 9th Circuit's jurisdiction.

The 9th Circuit has jurisdiction over seven states, including Oregon, Washington and California, where several counties have enacted GMO bans that are subject to its rulings.

“It’s a huge case for local and state GMO bans,” Tidgren said. “The stakes are very high. All eyes will be on the 9th Circuit when this case goes forward.”

And who better to address that dynamic than Margery Bronster, the former state Attorney General who successfully sued to have Hawaii anti-GMO bills overturned on the grounds that state and federal laws pre-empt local legislation? That's why she, and not the antis, was invited to speak to the national ag officials.

One of my favorite lines in the West-Hawaii Today article came from Hawaii County Councilwoman Margaret Wille, whose anti-GMO bill was thrown out of court:

“She [Bronster] is saying things need to be science-based. Whose science?”

Uh, you know. Real peer-reviewed legitimate science. Not the discredited Seralini study or tortured statistics that correlate autism with glyphosate or claims issued by non-scientists like Jeffrey Smith and Ashley Lukens, and politicians like Wille and Gary Hooser.

Speaking of non-science, here's an excerpt from a shockingly ignorant article published in a Zimbabwe newspaper, whose authors are criticizing a real scientist for support biotech:

There is no running away from the fact that GMOs contain altered, and therefore, corrupted DNA that God programmed into Adam, Eve and the Garden of Eden. God created the Garden of Eden to provide all the nutrients that human life needs, IN THEIR ORIGINAL FORM.

Yeah, better avoid all those corrupted modern fruits and veggies, like apples, tomatoes, etc., etc. Virtually nothing we eat today is in its original form, and folks would be complaining mightily if it were. 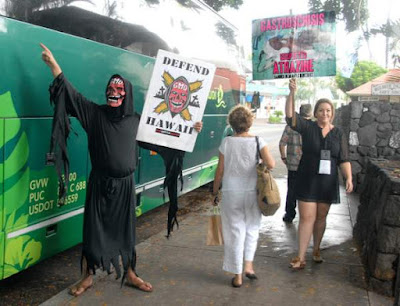 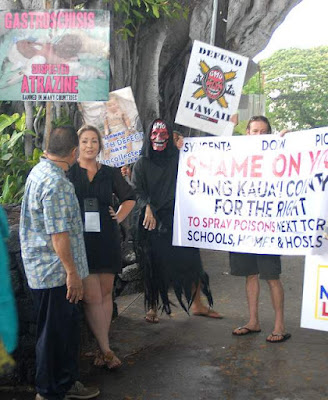 Boy, they sure have gotten a lot of mileage out of that “Shame” banner. Too bad it's total bullshit.

People deserve much better than the nonsense that has come to characterize so much of the anti-GMO debate.
Posted by Joan Conrow at 9:47 AM

If you believe that Ernie is the only non qualified individual that the county has hired than you people are the sheep that this admin tends to.

Probably half of the 1500 county workers are cronies and unqualified. Yes that means Carvalho and Baptiste has hired double the amount of county employees in the last 10 years.

The county of Kauai was founded in 1905 so it took the county to reach 700 employees in nearly 100 years and now it's double its size within the last 10 years.

WOW how insane is that?

"People, if you want to protest stuff, fine. But leave your kids out of it. You're just using them as puppets to parrot your own views. "

Love it! Best quote Joan ever!

Parents have been indoctrinating their young children for eons. All before the children can do simple math or even use logic or reason. Look around the world and you see it everywhere. Just pick a cause or ideology.

I have no sympathy for any of these protestors. And the County needs not just a hiring freeze, but it must reduce the number of employees. And is there any reason why the County must dig up a State Highway one month after the project was finished?,And then spend two months screwing up traffic and DOING NOTHING? It seems that most county agencies see their job as being inefficient and obnoxious as possible.

The county auditor should be an elected office, not appointed by the Council to avoid the appearance of politics.

The Birmingham Children's Crusade was a march by hundreds of school students in Birmingham, Alabama, May 2–5, 1963, during the American Civil Rights Movement's Birmingham campaign. Initiated and organized by Rev. James Bevel, the purpose of the march was to walk downtown to talk to the mayor about segregation in their city. Many children left their schools and were arrested, set free, and then arrested again the next day. The marches were stopped by the head of police "Bull Connor" who brought fire hoses to ward off the children and set police dogs after the children.

Malcolm X was opposed to the event because he thought it would expose the children to violence. He said, "Real men don't put their children on the firing line."

A pivotal civil rights campaign was fought in Birmingham, the most segregated city in the US. Fire hoses and dogs were used to prevent the students from meeting the mayor. The students remained nonviolent. This event prompted President John F. Kennedy to publicly fully support racial equality, and led to the passage of the Civil Rights Act of 1964

Auditor? For what?
Eh, you guys are spending too much money. There will never be nor has there ever been any accountability.

Everyone knows that once Carvalho is out then there will be a hiring freeze and that's why he's trying to hire everyone he can.

It's no secret and hasn't been a secret for years. If you are a family or friend then no need Interview until 6 months after you are hired and that's just to have paper work to cover up the fraudulent hire.

The recent history of Kauai's government should be taught in economic, political, and history college classes of how BAD government can be if you have unqualified sandbox delinquents in charge.

The mayor's family and friends are making big bucks for doing nothing. Just sitting in their fat okoles. Repulsive 'en all. We deserved what we got.