Yesterday, after finishing an article on the abject failure of the state’s burial preservation laws, which will appear in tomorrow’s Honolulu Weekly, I had the pleasure of accompanying a friend who shares my sense of wonder and is blessed with the gift of laughter to a special beach where magic just naturally happens.

And sure enough, it did. We saw rainbows floating in on two passing squalls that brought the kind of gentle precipitation that makes each falling drop distinctly visible, which I observed from beneath the shelter of an ironwood tree, my body already damp from swimming in a tide pool constantly refreshed by the bubbling foam of breaking waves.

We carefully checked out an oceanfront “condo complex” — if only they could all be that low impact and truly sustainable! — that had been dug into a slope by `Ua`u kani, or wedgetail shearwaters. Peeking into burrows, we spotted some of the newest seasonal residents: pale feathered fluff balls with impossibly bright eyes and long, curved beaks that speak to a successful fishing future.

(I’m posting a photo she took, so you can say “ohhhh” and feel happy, too.)

Then as we were standing there, marveling at our great good fortune to have seen shearwater chicks, who should land on the rocks right in front of us but five ruddy turnstones, newly arrived from their summer home in the Arctic and still dressed in their breeding plumage. They may be small, but they can fly at speeds of up to 40 mph, which comes in handy, I imagine, when covering those sorts of distances.

“I always feel so reassured when I see them, to think that even with global warming and the ice melting, they’re still able to survive up there and find their way back here,” my friend said.

“Yes," I agreed, “and they’ll be at it far longer than we will, because they’re much more clever and adaptable.”

And as if to prove that point, just then two iwa flew low and somber directly overhead, only their tail feathers twitching as they soared effortlessly on the thermals.

As I drove home, beneath the rosy hues of sunset and a bright, companionable moon, I had a smile on my face and words of gratitude in my heart that I spoke aloud to the lovely evening: mahalo, mahalo, mahalo.

While waiting for my dinner to heat — a yummy pasteles purchased from a roadside vendor this past weekend — I checked my email and discovered the blog trolls had been wasting minutes that are precious even in their marginal lives posting inane comments comparing me to Hitler.

Poor tings, dem! Is it any wonder they’re so miserable?

I have a small bit of advice for them, although I really doubt they’ll take it: every now and then, you might want to step away from the computer and get out into nature, where things are alive and ideas and belief systems and opinions don’t matter.

Just please, resist the urge to destroy anything while you’re out there. 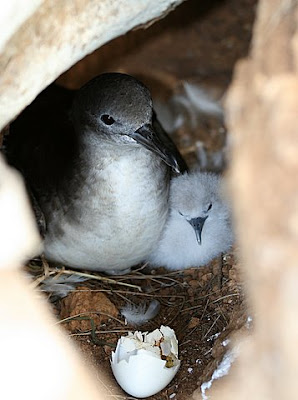 A while back in these comments someone accused Ed Coll of being unhappy because of something he wrote. He was all like, "Huh? What? Whatchoo talkin bout? I'm totally happy." Can't assume people are miserable just cuz they leave negative comments...or that they don't get out in nature.

Mahalo for the picture and your generosity for allowing frightened anonymous souls to seek a meaningful life by expressing themselves on your blog.

Now, that is inspired writting. I am so proud that you have the sense,desire and will to turly enjoy life and report it. Go for it girl. The world needs love.

Many thanks for the cozy words and picture. They made me shiver with oodles of pleasure.