It was a good morning for sleeping in, and Koko and I did, lulled by the rain that started at 4 p.m. yesterday and continued on through the night, pausing briefly around sunrise and then starting up again.

I could just feel the earth welcoming all that nourishment and moisture. I was up at Makaleha yesterday, where I was seriously bummed to see seven rental cars at the trailhead — is there no place now where the tourists don’t go? — and while the yellow ginger was blooming profusely, the stream was quite low.

Maui Tomorrow is looking for the low down on how much the Superferry is costing Hawaii taxpayers, a question that I and many others posed months ago. But they got it all together in a list that is extensive, and looks to be quite expensive, and they’re formally asking the Superferry Oversight Task Force to include that information in its final report to the Legislature.

Equally important, given all the secrecy and backroom dealing that has accompanied this project and Hawaii's government in general, the group asked the Senate Ways and Means and House Finance committees to release the document to the public and state auditor. We’ll see what happens. I'll be amazed if the costs are tallied, much less released to the public. But hey, hope springs eternal. After all, the bailout bill failed, or as blogger Ian Lind reminds us in a "language is important" post today, the financial stabilization legislation.

Yes, language is important, and so is money, which is why we surely all have the right to know just how much this "alternative form of transportation" is really costing us, especially now that state revenues are down and Superferry #2 is headed our way.

Yup, here’s a picture of “"the largest aluminum catamaran vessel delivered in the U.S." being launched yesterday at the Austal UAS shipyard in Mobile, Alabama: 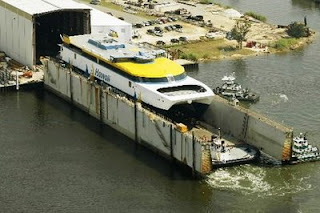 An article about the launch published in the Alabama Press-Register includes a few interesting nuggets and one error:

The ferry is part of a two-vessel, $190 million deal Austal landed in April 2004. While early plans tentatively called for up to five ferries, the inter-island service has been slow to start because of legal and weather complications, and Hawaii Superferry Inc. now plans to operate just two ships.

The first boat, named Alakai for "ocean path," is sailing with far less than half its capacity of 866 passengers and 282 cars. That vessel operates daily between the islands of Kauai, Oahu and Maui. [We all know it’s not sailing to Kauai now, mahalo ke Akua.] The sister vessel will offer service between Oahu and the Big Island starting in May 2009, according to the company.

Alakai has been averaging about 300 passengers and 100 vehicles per voyage in the past several weeks, which Hawaii Superferry called a "significant" improvement over its starting numbers.

In April, a preliminary audit found that the state bowed to pressure from Hawaii Superferry when it allowed the company to start operations without the [required environmental] review. The audit is ongoing.

And then it speaks to the military links:

At 113 meters (373 feet) long, the vessel launched Monday is 6 meters (19.8 feet) longer than Alakai, thanks to a ramp Austal added to its stern, making it suitable for military use. Industry watchers have said leasing the vessel to the military is a possibility, though the company said it is sticking by its plan to operate it commercially.

The second Superferry is one of two major projects that has sustained the 1,000-person workforce at Austal over the past several years. The other, a U.S. Navy combat ship, is scheduled to be christened Saturday.

Austal is awaiting word on more military work, including a major contract to build fast ferries for the U.S. Army and Navy.

One can only wonder how long the company will stick by its plan to operate the ferries commercially when it continues to lose money and now plans to add another ship to an already failing enterprise. Maybe HSF funder John Lehman is just waiting to see if his buddy John McCain gets elected, as he'll surely get a better military contract from a friend.

Mahalo to Dick Mayer, the super Superferry watcher, for sending these links.
Posted by Joan Conrow at 7:59 AM

Don't worry, President McCain will bail out the HSF.

That's butt ugly with that yellow on top.

HSF has neither a commercial nor a military mission that makes sense. The lender is toast. Unluckily, that's probably the taxpayer.

interesting to note mccain's comment during the debate on friday. he mentioned littoral combat ships being much more expensive than originally planned. he also remarked that such cost overruns would stop on his watch. we'll see if obama can match that.

Sure, say that after Lehman gives him campaign $$$.

did anyone read about the dogs dying of heat stroke on ferry?

From the picture it looks like a littoral attack ship capable of rapidly transporting and deploying heavily armored troops too me. Might be practical with forward deployed air support. The three-quarter sized demo model (Spirit of Ontario), was brought to Kauai by and 11 person crew from Australia in a few days, and skirting a hurricane so it's got range(at least the 3/4 sized model (now serving Moracco after it went bust in Ontario and New York.

Yeah, a smug-nosed dog died in the heat of the owner's care down below onboard. People with smug-nosed dogs gotta be more careful 'cause those dogs overheat more quickly.

McCain is a typical politician. He will say whatever sounds good to get elected, even if it is diametrically opposed to his history, advisors, contributors, and likely later actions in office. Here was the disingenuous quote from the debate:

"MCCAIN: Look, we, no matter what, we’ve got to cut spending. We have — as I said, we’ve let government get completely out of control.
Senator Obama has the most liberal voting record in the United States Senate. It’s hard to reach across the aisle from that far to the left.
The point — the point is — the point is, we need to examine every agency of government.
First of all, by the way, I’d eliminate ethanol subsidies. I oppose ethanol subsidies.
I think that we have to return — particularly in defense spending, which is the largest part of our appropriations — we have to do away with cost-plus contracts. We now have defense systems that the costs are completely out of control.
We tried to build a little ship called the Littoral Combat Ship that was supposed to cost $140 million, ended up costing $400 million, and we still haven’t done it.
So we need to have fixed-cost contracts. We need very badly to understand that defense spending is very important and vital, particularly in the new challenges we face in the world, but we have to get a lot of the cost overruns under control. I know how to do that." B.S...Liar.

Dear Mauibrad,
There is no Aloha in your relentless and completely biased attacks on all things Superferry so why not use a different salutation at the bottom of your "comments?"

Depends on what you call "Aloha." Aloha is a very broad concept. It is the breath of life, but also love and kindness, in addition to hello and goodbye. Related is also "pono." I'm after a pono aloha to HSF on all of this.

"Dear Mauibrad,
There is no Aloha in your relentless and completely biased attacks on all things Superferry so why not use a different salutation at the bottom of your "comments?"

Whatever Aloha remains on this beautiful island will disappear if HSF is allowed here. But then if one doesnʻt know what Aloha is, one wouldnʻt know what theyʻd be missing. Right?

Keep up the due diligence, Brad.
Mahalo and Aloha!

Others, including Joan, have said it before, but it's good to remind everyone: the shipyard "owners" (aka investors) are
the same ones ramming the ferry down our throats. Their name is Lehman and they are part of the Bush oligarchy (maybe that should be oilgarchy).

I love the idea of HSF. I wonder if the locals on all the FL keys felt anti-highway sentiments before they were connected from Miami to Key West? They got over it.

It seems like too may people have way too much time on their hands writing about this.

Chill out. Come home from work, assuming you have jobs, pop a few beers, watch TV. Leave the computer off for about a month.