Musings: In the Realm of Birds

The sky was inhabited by clouds, the moon (a smidge fuller than half) and a few sparkling stars when Koko and I went walking this morning. The street was crunchy underfoot with grit and gravel washed from the sides into the middle by the recent heavy rains, and the air was still and windless.

And then the sun arrived and brought color: wispy strands of dreamy pink, streaks of shiny gold and silver, clusters of dove gray, and a striated swath of brilliant starfish orange.

The Laysan albatross also have arrived, as they do this time of year, and a friend and I spent yesterday morning among them in a small patch of ironwood trees buffeted by wild gusts on a cliff above a restless, foamy sea. All the wind-loving birds were out enjoying the day: dozens of boobies, their wing tips bent down by the stiff breeze, iwa gliding silently, effortlessly, on the air currents and half-a-dozen albatross, giggling and crooning and clacking, their white feathers ruffling in the unrelenting trades.

I am awed by their ability to know exactly when to return, without aid of calendars or clocks; to rendezvous with their mates, without emails or cell phones; to find the place they were born, without GPS or maps.

We keep creating gadgets that are supposed to make us more efficient, more effective, but we don’t seem to notice we’re the only species on the planet that depends on this stuff for the most basic elements of existence. How can it be that we’re superior because we can create it, when we’re the only ones who need it? Could it be that we know how to live without the gear, we’ve just forgotten? Is it possible that each new piece of technology serves not to connect, but further separate us from that knowing, and each other? How would the world be different if we seriously entertained the prospect that we are not the most advanced species in it?

Those are the sorts of musings that drift into my consciousness when I spend time in nature, especially among birds, and with this particular friend, who had recently returned from Bhutan. She reported the citizens there were overjoyed at news of Obama’s victory, which coincided with the coronation of their king, whom they love and had traveled great distances, many on foot, to see. It was her third trip, and she was struck anew by the joyousness and loving nature of the Bhutanese, whose leaders are governed by the philosophy of Gross National Happiness.

They have few material comforts, she said, yet even those who are educated in America prefer to return home, to their families, rather than stay and accumulate the goods and goodies in the U.S., because their cultural values are so strong.

That caused us both to reflect on the nature of American values, which seem designed only to advance and foster capitalism, and they are so different than the local/Hawaiian values that make it such a joy to live on Kauai, where someone had left papaya and flowers on our cars —a simple act of kindness and generosity needing no recognition or payment.

And so I left the realm of creatures that soar on the wind and fish from the sea and stockpile nothing more than what they can carry in the bellies and returned to the world of humans busily hoarding and fretting and power jockeying — and sometimes giving and loving and sharing. 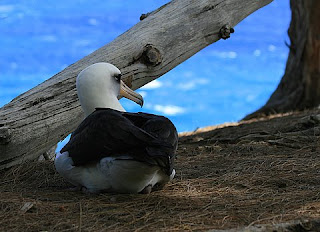 What about fixing a compound fracture if you break your leg and getting some antibiotics in you so you don't die of infection?

I only went out for a walk and finally concluded to stay out till sundown, for going out, I found, was really going in.
- John Muir

> What about fixing a compound fracture if you break your leg and getting some antibiotics in you so you don't die of infection? <

What about a health care system that doesn't force people to choose between antibiotics and food for their children? What about a pharmaceutical industry that prices antibiotics so that suffering people can afford them, instead of so their rich CEOs can become richer?