I spent the better part of yesterday afternoon in the wind and salt spray, amid a colony of Laysan albatrosses doing their thing in what is now the nesting season. Lying on my belly on soft grass, I watched them soar, effortlessly, silently, fast, their orange feet acting as rudders, at times swooping right over me and on take off, their giant wings just feet from my head.

Being with the birds always causes me to wonder just why it is that humans have gotten into this mindset that we need so much. You don’t see any birds building giant nests to impress their neighbors or creating multiple nests that they don’t use or need or constructing warehouses to store up supplies of squid.

No, each pair claims just one small patch of earth, and using the materials at hand, crafts a little bowl of ironwood needles and soil in which they lay an egg.

This year their nests are higher than I’ve ever seen, some rising a good six to eight inches above the ground, almost like platforms above a moat, prompting speculation that perhaps they’re expecting a very wet winter.

While there, I saw two infertile eggs replaced with eggs taken from nests at Pacific Missile Range Facility. The Navy doesn’t like birds on the base — they actively discourage nene from grazing on the lawns, too — so the poor albatrosses that nest there (adults return to the place they were born to raise their own young) never get a chick. It’s just another one of the small ways we screw with nature.

But at least their eggs are moved elsewhere so the population increases on the North Shore, where they aren’t considered a nuisance or threat to national security. And the adults gracefully accept the new eggs and go on to raise the chicks as their own. 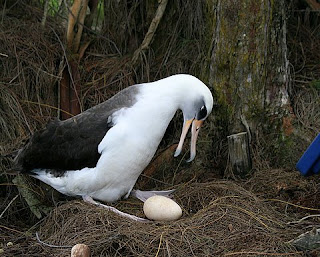 We have albatrosses here because we don’t have the mongoose, or at least not large numbers of them, although the Kauai Invasive Species Committee folks tell me they are certain that at least a few of these critters, which prey on ground nesting birds, are now established on our island.

The bad news is that controlling alien and invasive species is likely to be one of those programs hit hard by the hard times, meaning further degradation of Hawaii’s unique native ecosystems. It’s really unfortunate, but not surprising, that Gov. Lingle’s economic plan included no new initiatives for conservation projects to protect the environment that is literally and figuratively our bread and butter.

Environment Hawaii reports that the Lingle Administration has failed to implement a law adopted by the Lege that calls for a new cargo fee to beef up inspections on imported goods. Somehow she and her team still haven’t recognized that it costs far more to eradicate pest species — if such action is even possible, and it usually isn’t – than to keep them out in the first place.

Meanwhile, we’re trying to promote Hawaii as a paradise even as we’re importing the little fire ant (on Kauai, there’s already one infestation in Kalihiwai) and other pests and allowing the natural world that makes this place so unique and special to deteriorate.

And that’s just on the local scale. Globally, scientists are warning that the Arctic is warming at an unforeseen pace:

The US National Snow and Ice Center says temperatures recorded today weren’t expected for another ten to fifteen years. Researchers say autumn temperatures were higher because of the heat accumulation from increased melting in the summer. The process, known as Arctic amplification, could signify Arctic melting has hit a point of no return.

Do you suppose the kids in Greece are rioting not just because a cop killed a teenager, and the economy is flailing and they’re sick of the corruption that permeates their own government and others around the world, but because they recognize, at a much deeper level, that the future that’s being handed to them isn’t much of a future of at all?
Posted by Joan Conrow at 9:58 AM

-- and why arnt there pig/goat eradication if they eat so many endangered plants, etc?

"While there, I saw two infertile eggs replaced with eggs taken from nests at Pacific Missile Range Facility. The Navy doesn’t like birds on the base — they actively discourage nene from grazing on the lawns, too —.."

.....I'd like to know more about the damn military's interference with the Nene. They REALLY need to get the hell out of Hawaii, this is the last straw (on top of the desecration and not even paying their rent), and it's a federal 'straw' at that.

Oh yea, because we eat the pigs and goats. So get off it already. Because I'm SURE you probably don't really care about the endangered plants, why do the goats and pigs bother you?

what would be the economic replacement for the military? or are you not offering one?

sorry to have touched a pig/goat nerve (i was gonna bring up cats as they eat a good number of "special" birds). i guess i like plants? i heard the pigs eat certain rare plants is all

I think the purported 'economic benefits' of the military is hyped and most assuredly faulty.
This is not a 10 word or less answer either. But, many things start coming to mind...the first one is, why can't they pay rent? They pollute and destroy causing countless secondary health and infrastructure impacts.....which we end up paying for.
So just with that, can you tell me what economic benefits we are referring to?

Yep the cats are a PROBLEM.

ohhhhhhhhh. yes, nice point. a comprehensive view of military impact is appropriate for sure. the econ impact tho? well there are civilian and military salaries, they buy some homes off base and by things off base, and then those operations do use/buy 3rd party local civilian services. i suspect that is the bulk of it anyways

but ya, RE pollution (water, soil)...that is fair game for sure. clean up cost, and also temporary and/or long term loss of rent (ie, too polluted for another purpose)

any on some of those locations, if the base were not there, that area could be used for some other purpose that would generate income for the state/county (esp - esp - in/near honolulu)

but are you saying you'd bet RE the above that the net positive impact is "not there" or just "not as large as claimed?"

also, while military spending is cyclical to some extent, it is far more stable than a given industry, so that is a value as well (hard to quantify tho)