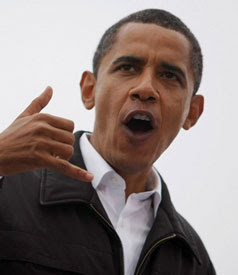 I didn’t get up to watch the inauguration because I don’t have a TV, and at the risk of sounding like a bad American, I really don’t much care. Pomp and circumstance don’t mean anything to me.

Still, it's great to see people all excited about our new Prez. Heck, even the movie stars are feeling inspired, according to an Associated Press report on the Oprah Winfrey show, which yesterday featured a “surprise appearance” by Joe and Jill Biden, where she revealed that Obama had offered her husband his pick of VP or Secretary of State:

Winfrey also interviewed movie star couple Demi Moore and Ashton Kutcher about how Obama has inspired them to pledge to help end slave labor around the world and encourage other people to make a pledge to improve their communities. Other celebrities, including Scarlett Johansson, Justin Timberlake and Forest Whitaker appeared by videotape to talk about what Obama's election means to them.

Wow, I can’t think of anything more intriguing. Yawn. But a friend who happened on yesterday’s Martin Luther King Jr. Peace Day celebration at Kukui Grove said she was touched by a poem that an African-American teenaged boy had written around the “I have a dream” theme. It included the dream of being able to walk into a mall without being shadowed by security guards, and ended with how he had achieved his dream of seeing a black man elected to the nation’s highest office, which gave him hope for his own future.

Web coverage of the inauguration showed Bush to be all smiles, and why wouldn’t he be? He’s walking away without criminal charges from a huge mess, as an AP story on Obama’s speech underscored:

With 11 million Americans out of work and trillions of dollars lost in the stock market's tumble, Obama emphasized that his biggest challenge is to repair the tattered economy left behind by outgoing President George W. Bush.

"Our time of standing pat, of protecting narrow interests and putting off unpleasant decisions — that time has surely passed," Obama said in an undisguised shot at Bush administration policies. "Starting today, we must pick ourselves up, dust ourselves off and begin the work of remaking America."

And today, it seems, is not a moment too soon. As AFP reports, citing a recent Gallup poll:

Some are jumping out of the frying pan and into the fire, with nytimes.com reporting that military enlistments are way up in this dreary economy:

The last fiscal year was a banner one for the military, with all active-duty and reserve forces meeting or exceeding their recruitment goals for the first time since 2004, the year that violence in Iraq intensified drastically, Pentagon officials said.

Yup, the rich get multibillion dollar bailouts and the poor get shot up and/or traumatized fighting imperialist wars in Iraq or Afghanistan. What a great plan! Don’t you just love America?

Of course, America ain’t the only place that’s hurting. AFP is also reporting that Australia’s economy is heading for a “scarily fast” fall:

"This is not just a recession. This is the sharpest deceleration Australia's economy has ever seen," the Access Economics think-tank said in its quarterly business outlook.

China's booming demand for mining resources such as coal and iron ore have driven years of good growth but the slowdown in the Asian giant's economy has revealed Australia's vulnerability, it noted.

And yes, even mighty China is slowing, with AFP reporting that folks from China to Singapore are toning down their Year of the Ox celebrations.

It might be a tiny bit of an overstatement to blame all the world’s woes on the Bush-Cheney team, but as Maui’s Dick Mayer noted in an email, today does indeed mark “The End of an Error.”

As for Obama, I’m not expecting miracles. Shoots, I’d be happy if he could merely live up to this part of his inauguration speech:

What the cynics fail to understand is that the ground has shifted beneath them -- that the stale political arguments that have consumed us for so long no longer apply. The question we ask today is not whether our government is too big or too small, but whether it works -- whether it helps families find jobs at a decent wage, care they can afford, a retirement that is dignified. Where the answer is yes, we intend to move forward. Where the answer is no, programs will end. And those of us who manage the public's dollars will be held to account -- to spend wisely, reform bad habits, and do our business in the light of day -- because only then can we restore the vital trust between a people and their government.

But then, maybe that is wishing for a miracle after all.

Mahalo to LightLine for the cool Obama photo. Ya gotta love a guy who can flash a mean shaka.
Posted by Joan Conrow at 8:16 AM

I think it was one truck that ran over one person.

The times they are a-changin'. Here's proof: I'm actually suggesting that you all take a read of a conservative columnist. (Weirder things have happened, but not many.)

The columnist is David Brooks. His piece is "The Politics of Cohesion," in yesterday's New York Times.

trucks on beaches that should not be there - problem

vehicles on beaches that should not be there - problem

rocks thrown up onto bikers, walkers, and other cars b/ the wheels on a given vehicle extend beyond the wheel wells is a problem

end of the world? nope, just road safety problems, and easily solvable. and that story helps show such problems

this number is for a newly forming group

Citizens for Safe Kaua’i
John 808 634 4457
concerned about driving on the beach?
big trucks with illegal tires w/o mudflaps? give john a call

While I appreciate your blogs, this one proved far too cynical, particularly the opening paragraphs. "America" has a LONG way to go but...Look, an Afro-American man got elected president! Bush and his ilk are out! I'm just saying for one day, one day when almost everyone from Kauai to Mississppi unites, there is hope warranted, not cynicism.