I was up late last night, so the morning’s rain served as a welcome muffler to the raucous roosters, allowing me to catch a few extra winks until a 6 a.m. phone call got me up for good. Koko and I headed over to the beach, where a rainbow caressed the northern side of the Anahola mountains and the sun was in full-on shimmer on the sea.

For me, diving into the water anytime, especially in the shimmer, = joy.

While I was down there, I saw two fishermen, which reminded me that a reader once asked if I could share various things I’d learned about local culture, like the proper etiquette around throw net fishermen.

Unlike pole fishermen, who are waiting, throw net fishermen are stalking, which means stealth. So you don’t want to get between them and the water, or make a lot of noise that might scare the fish, or approach them, or jump into the water as they’re making their way along the beach, as they could be tracking fish.

When I see them, I tend to hang back by the tree line and keep Koko close until I figure out which way they’re going. If they’re headed my way, I wait until they’re well past before I enter the water.

I don’t claim to be an expert, and others may have different ideas, but I’m just conveying what I learned from my ex-husband, who sews and throws net. I don’t miss him, but I do miss that fresh limu smell of the reef that accompanied his catch, and I really miss the aholeahole.

My friend Kaimi dropped off some akule this morning on his way to the airport. He and Kaili are flying to Honolulu to help sail the Hokulea over to Kauai tomorrow. As we all agreed, that’s a good way for kanaka to spend Independence Day.

Or if you’re a Laysan albatross, fledging. (Photo by Hob Osterlund) 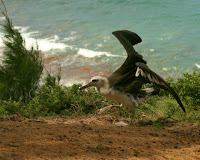 I’ll be working, as will, reportedly, the guv and her Cabinet, who must come up with Plan B now that the court has ruled she does not, as she claimed, have the power to furlough state workers.

It seems the guv could have started by assessing how many workers might want to reduce their hours. Farmer Jerry said he wouldn’t mind a furlough because it would give him more time on his farm. Surely others would feel the same way, while for some, a three-day monthly furlough could create an economic hardship.

But from the beginning, Lingle approached the issue in such a heavy-handed manner, boldly asserting her authority to order the furloughs. It’s not unlike her equally ill-fated "Unified Command" handling of the Superferry. While it’s evident she’s pretty much dead meat for the rest of her gubernatorial term, it might help her future political endeavors if she learned a bit more finesse.

You know, sort of how Councilmen Kaipo Asing and Jay Furfaro have co-opted the transparency revolution launched by Councilmembers Tim Bynum and Lani Kawahara with their announcement that “after a year of planning” council meeting minutes will be posted on line. As The Garden island reported:

The placement of public documents, including meeting minutes, on the county’s Web site is one of four matters to be addressed at an upcoming council meeting after a communication introduced by Lani Kawahara and Tim Bynum was approved by all seven council members last month.

The communication requested agenda time at either the July 8 or July 22 meeting to discuss council members’ access to the agenda, equitable and timely circulation of council service documents, general access to information by the public and council members, and putting documents online.

The agenda for the July 8 meeting was posted Thursday; it does not contain an item pertaining to the communication approved June 16. While some of Bynum and Kawahara’s requests remain unaddressed, it appears one major gripe has been rectified.

To co-opt the lyrics to a song: “Democracy is coming, to the Garden Island.”
Posted by Joan Conrow at 8:40 AM

there are too many state and county workers. not justified or sustainable

Joan wrote: “Democracy is coming, to the Garden Island.”

Actually only the "illusion of democracy" is coming. See this URL to see why http://ekcoll.wiki.zoho.com/Frustrating-Citizen-Participation.html

kudos to jay for working with the dissenters and leadership to 'project' a functioning body politic. vice chair and chair working hand in hand for over a year to get what lani and tim have been grumbling about. that's responsive leadership; lets see what else our leadership team will produce in the coming weeks. glad our local media is covering the story. between radio shows, blogs,petitions and front page coverage the set up for the july22 meeting should be anticlimatic.

"While it’s evident she’s pretty much dead meat for the rest of her gubernatorial term, it might help her future political endeavors if she learned a bit more finesse."

There's a vacuum on the mainland: a black hole centered on the RNC, with suction that could give an elephant a full-body hickey at 50 miles. Lingle's adroitness is desperately needed. Her time is now!

w/the RNC's recent string of presidential wannabe's sexcapades it would just be karmic timing to have lady lingle outed just as she tries to leverage her credentials for the national stage.
the headlines scream- "lingle's lesbian lover tells all".
time will only tell;)

Lady Lingle doesn't have a thing to worry about. She's a Republican governor who not only talks the talk but walks the walk, from public acting out of narcissism to blatant lack of empathy and scorn of the media.

RNC perception-wise, that she's from Hawaii makes her a refreshing changeup from Ms. Moosekiller; any hints of alternate lifestyle will only favor her to a party leadership that is desperate to reach out to anyone who can fill out a ballot and isn't an old white guy.