Musings: What I Learned

I learned a few things this week.

While interviewing Jane Ely, a Native American Indian who is helping to organize this year’s Kauai Pow Wow, she explained the origin of and meaning behind some of the dances that will be performed.

One, in particular, stayed with me — the jingle dance. It seems that after a massacre, the survivors would pick up the spent bullets, along with the dead women and children, and then they’d fashion the bullet casings into costumes, which are properly called regalia. As they danced, and the shells jingled, the spirits of those who had died would be honored.

She also said many Native American Indians oppose the Akaka bill, because it would impose a blood quantum on Native Hawaiians and create a land reservation system. Both are aspects of how the American government has treated them that they find particularly distasteful, and disruptive to their culture.

While interviewing Larry Littleton, a Kauai resident who is the only deaf person to serve as an interpreter for the deaf in Hawaii — and one of just 89 such interpreters in the U.S. — he revealed that after he got a cochlear implant, he discovered that silence is, indeed, golden, and “hearing is not all it’s cooked up to be.” He’s glad that he can now hear music — and also glad that he can turn off his implant when he wants to enjoy the blessed pure silence that eludes the rest of us.

And a friend, who spends her spare time peering into shearwater burrows and watching albatrosses fledge and other fun cool bird stuff, sent this picture, which informed me that even when their wings are still nubs, just-hatched wedgetail shearwater chicks are already practicing how to fly. 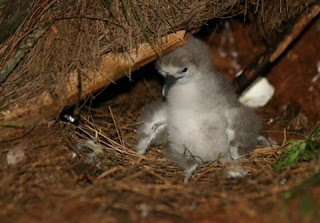 "She also said many Native American Indians oppose the Akaka bill, because it would impose a blood quantum on Native Hawaiians."

Ummm what's wrong with that? If no blood quantum is taken, anyone (see Filipinos for example) can change their name to Hawaiian and get benefits, right?

...jingle dance. It seems that after a massacre, the survivors would pick up the spent bullets, along with the dead women and children, and then they’d fashion the bullet casings into costumes...

This story is ABSOLUTELY NOT true. The jingle dress originated with the Ojibways, & was created as a healing dress for a sick girl. It is STILL called a medicine dress today. NO MASSACRE WAS INVOLVED!