One thing I love about my new house is the skylights in each room, because they bring the outdoors in. As I’m writing this, I can glance up and see sky and trees. The other night, while lying on the bed, talking to my sister on the phone, I turned off all the lights and watched the clouds racing over the moon — wisps that gave it a halo, large black clumps that blotted it out, thin streaks that turned it golden. And this morning, I awoke to glittering stars, the same ones that were out there when Koko and I went walking, encountering both my neighbor Andy and farmer Jerry, who was recognizable in the darkness only by his voice.

I finally got everything moved out of my old house yesterday, and the landlord repaid my security deposit in cash and thanked me for helping him to pay his mortgage. In all the years I’ve rented, he’s the first person to ever express that sort of appreciation, which was reflected in the fair and kind way he treated me throughout.

What a pleasant switch from so many of the other landlords I’ve encountered, who seem to forget that it’s a collaboration and instead maximize the exploitation aspect. Folks might be surprised to learn how various “upstanding citizens,” including one who served on the ethics commission and another who ran for Council, treat their tenants.

Yesterday’s Garden Island article about the $28 million sale of Papaa Bay drew an angry comment about how the new owner — described by the real estate agent as “soulful and caring” — treated the workers.

Contrary to rumors, the new owner is not actor Will Smith, but a cancer doctor. According to one worker at A Rat — Tara spelled backwards, a nickname given the place to reflect feelings about the former owner, Peter Guber — the new owner did require piss tests (easily thwarted through the purchase of clean urine at a local shop that has found a niche market untouched by the big box stores) and gave everyone a pay cut. But now they do have better health benefits and a retirement plan.

I guess even though have you $28 million lying around for a vacation home, it doesn’t mean you can afford to pay your workers a decent wage AND give them good benefits. Still, most anyone would be better than Guber, whose most valuable “improvement” to the property was not the house, stables, tennis courts and guest houses, but the lawsuit that ensured the public riff raff won’t be traipsing through that property on their way to the beach.

Ya gotta wonder if the new owner, who bought the 174-acre parcel “for the serenity of the site,” to quote Realtor Hannah Sirois, who has made a tidy bundle peddling that particular piece of land, will continue Guber's policy of directing his staff to discourage folks from using that beach.

Guber exemplified the worst behavior of the rich Americans who exploit Hawaii. Besides waging a nasty fight against public access, which included civil suits — ala Joe Brescia — against those who opposed him, he also dug out part of a cliff so he could get around the shoreline setback and build close to the ocean. In the process, they “inadvertently” encountered a burial that was stored in the electric utility room until the former caretaker got so sick and tormented that he conducted a proper reinterment of the iwi, and so found health and peace again.

Guber also installed flood lights, sprinklers and vegetation on the beach, which fortunately were ripped out in a giant northeast swell a few years back, although now that crap is floating around in the ocean.

So good riddance to Guber, although too many people just like him remain, as noted in a story in today’s Star-Bulletin on whether oceanfront property owners should own any newly accreted beach that forms in front of their lots.

Why are these private landowners always trying to grab more of what belongs to the public? You can see this all along the coast here, and on Oahu and Maui, too. I’m sure it would be happening on the Big Island if it had more beach to steal. And judging from the comments left on the story, the public really resents both the practice and the people who engage in it.

This issue has been prominent in my mind because I just finished a story on the continued vegetative encroachment of Hawaii’s beaches, which will run in Wedesday’s Honolulu Weekly. Quite remarkably, the state is fully aware that folks are intentionally doing this, but say it’s too hard to bust ‘em, so they need a new law before they can really crack down.

In the meantime, the plantings keep growing and so the beaches keep shrinking, making it awfully challenging to take a walk when the surf is up, as this recent picture of the Wainiha subdivision near Joe Brescia's house shows: 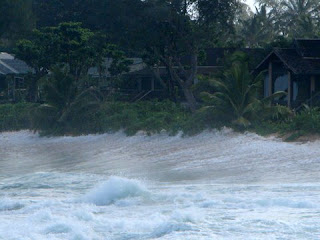 How long do you 'spose it will be before the ocean is lapping at their living rooms and they're begging for a concrete seawall — or sandbags, as is the case further up the coast — to protect them?

Perhpas instead of just picking up trash along the beach, folks need to start yanking the vegetation that's growing makai of the high wash of the waves. That's our property, after all.
Posted by Joan Conrow at 8:29 AM

That makes since. The public beach ends at the upper reaches of the wash of the waves. So there will be times when all the public beach is under water and there won't necessarily be any place to walk until the tide goes back out.

But on Kauai this natural process does not occur. Vegatation = less beach.

Too strange to ponder.

as noted in a story in today’s Star-Bulletin on whether oceanfront property owners should own any newly accreted beach that forms in front of their lots.

Why are these private landowners always trying to grab more of what belongs to the public?

Read the article. sounds like it was the other way around: state trying to take what has always belonged to the landowners. The court agreed with the landowners btw.

"Why are these private landowners always trying to grab more of what belongs to the public?"


"The court agreed with the landowners btw."

Legal does not equal fair.

Today, the elites with the biggest bank accounts and the most lawyers and legislators in their pockets take what they want from society.

Dawson's one-conspiracy-fits-all-situations approach fails him yet again. See, Dawson, in this case, it was the elite legislators who took the right to accreted lands away from the elite landowners. I don't know how you can make the actual facts fit into your narrow-minded world view, but I'm sure you'll come up with something entertaining.

Owners, what's wrong with you? Please quit planting on the beach! We used to be able to walk ON ACTUAL BEACH even when it was winter and even where it was at the "highest wash of the waves."

The community is getting upset! If you don't make room for the public, we will make room.

I believe it's a conservation district. Rebel at your own risk.
Heavy fines for distrupting the natural order...

why are you walking anywhere near a coastal high hazard during an episodic event?

why are you walking anywhere near a coastal high hazard during an episodic event?
9-12 feet surf on the northshore is not an episodic event, wait until 30 foot waves arrive and you can call that episodic.

Presisely "installed" is the key word.
Our northshore beaches were natural, big wide sandy beaches with natural transient migratory vegetation on the sand dunes. In their natural state, the dune releases sand as needed as part of the natural process. Natural transport and migration of sand is a necessary dynamic . The installing and man made changes stop the normal beach processes, building up sand in the planted veg far more seaward than is natural, making the beaches steeper and steeper, until they scarp. The veg interferes with the natural nesting of shearwaters, turtles, and once the beach is steep ,keeps the monk seals from being able to haul out and rest.
Our beaches were naturally some of the finest on the planet, now we are watching them be privatized with plants.

I will then encourage you to walk on the beach during 'surf's up', but please, do it on a beach without life guards -

"I will then encourage you to walk on the beach during 'surf's up', but please, do it on a beach without life guards"

Ha-ha...at least with the 'extra shrubbery' you'd have something to reach out for to grab onto!!

"building up sand in the planted veg far more seaward than is natural, making the beaches steeper and steeper, until they scarp. The veg interferes with the natural nesting of shearwaters, turtles, and once the beach is steep ,keeps the monk seals from being able to haul out and rest."

-- you know when you describe it per being "steep," helps us (or just folks like me) better see it...cuz it does seem pretty steep in parts. and i bet (or hope) even others that are pro property rights would quickly alter views if shown how it hurts the turtles too :)

"The court agreed with the landowners btw."

Charlie Fosterʻs site said that will be appealed and this is the 1st time I side with the state but "accreted" hah hah lol, the beach is the beach and any beach is state jurisdiction.
Whacko judge. Must be from californicatia.

Wish it was Will Smith moving in. Doubt heʻd be abusing the workers and would probably adapt quickly to what is pono and what IS NOT.

So the glaring observation on the table is: a cancer doctor that has that kind of money. I donʻt think the creep will survive long here. And donʻt think wifey will want to mingle in the supermarket once everyone gets wind of who they are.
Sorry to jump to conclusions, but that is too stink for words.