Musings: Both Ends of the Spectrum

The full moon danced all night, through the clouds and across the skylight over my bed, before finally slipping into a thick pile of fleece atop Waialeale shortly before dawn, which arrived as a smudge of pink against gray.

Big gusts of wind whipped the clouds into a frenzy and caused the leaves to tremble and the tree limbs to squeak, yet still the birds could be heard singing cheerfully, mightily. It does seem their sweet voices are louder in the spring.

The voices of the poor, disabled and disadvantaged are among the quietest, however, and so their needs — and the jobs of 228 eligibility employees, comprising almost half the workforce — are what the Lingle Administration is choosing to sacrifice to save about $8 million.

Yet to hear Human Services Director Lillian Koller describe it, service will actually be improved and wait times will somehow magically be reduced because people can apply over the phone, on-line and via fax and mail.

It’s rather remarkable that a person in her position is so out of touch with the clientele her agency is serving. Through my job, I’ve found that many of those eligible for or receiving such aid do not have phones and virtually none have fax machines. They do not have computer skills, email and/or ready access to the Internet, and they often need help completing applications.

The system, and its forms and letters, is not easily navigated. I’ve had people bring in letters from various government agencies that even I, with a pretty high level of English skills, have had a hard time deciphering. To think that people will get the help they need with fewer opportunities for face-to-face consultations with eligibility workers is totally unrealistic.

I was reading an article about health care reform and various politicians and pundits were saying that America has guaranteed its citizens certain basic rights, like food, a roof over their heads and a secure old age. From their comfortable and theoretical vantage point, that may appear to be true, but in fact, it’s not actually the case.

There’s currently a freeze on housing subsidies, which means that many people are unable to afford even the lowest rents, and a large percentage of those who come to our food pantry are already receiving food stamps, which don’t actually carry them through the entire month.

As for a secure old age, I’m not sure even the baby boomers, with their recently devalued investments, are guaranteed that, much less the working poor, like the 61-year-old jobless waitress I talked to the other day who is somehow living on $686 per month in unemployment benefits soon to be cut off.

Meanwhile, on the other end of the spectrum, you have someone like Joe Brescia, with his multi-multi-million-dollar real estate portfolio on Kauai alone. And still he must have more, which is why he is building atop a burial ground at Naue, where the installation of his septic tank is currently under way some seven to 10 feet from two burials. You can see one of them surrounded by rocks, with a small ti plant. 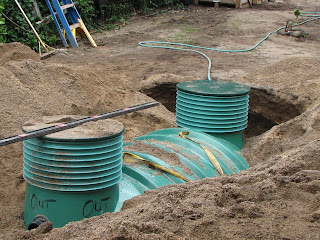 But work had to stop when they encountered not burials, but electrical wires serving the house next door. It seems it’s always something at that job site. 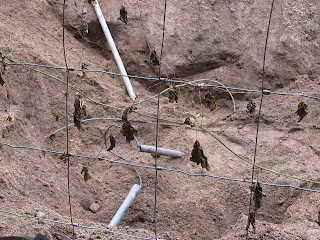 Given the size of his lot and house, and the abundance of iwi, it’s hard to imagine just where his leachfield might go without actually contaminating the burials. That’s a question the Burial Council had, too, but the state decided it didn’t need to be answered. 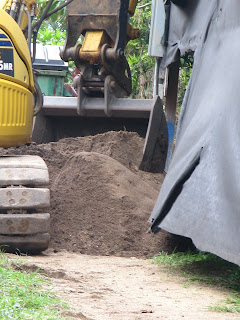 But Brescia's archaeologist, Mike Dega, also had to get in the hole. 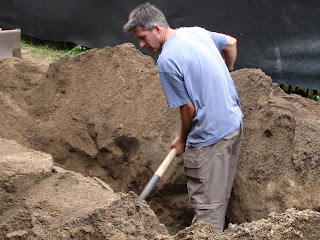 Fortunately, contractor Ted Burkhardt is keeping a close eye on things — or at least, our photographer, anyway. 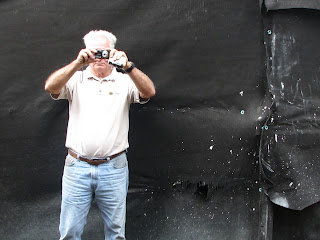 And to some people it matters not at all how Joe Brescia makes the money that he oh-so-nobly puts in his workers' pockets.

Joan: "To think that people will get the help they need with fewer opportunities for face-to-face consultations with eligibility workers is totally unrealistic."

I agree. Though their are many technological solutions to many problems, not all problems are technological in nature. The Mad Builders (Atlanta)

deployed a technological solution to homelessness in 1988, but the problem is social, not technological. By providing home to the homeless the Mad Builders were "breaking the law."

Seems Hawaii spends quite a bit of money harassing the homeless instead of seeking humane solutions self-satisfied that the homeless are to blame for being so.

Well it also helps cover up the fact that this surge of homelessness especially on the west, is directly a result of Lingleʻs aggressive actions to cause such (to uproot the Hawaiians more so than they already were).
It is in no way because of the economic downturn, it may be exacerbated by that fact, but the cause and momentum has only ONE name on it...Lingle.

Lingle is the cause of all homelessness everywhere in the world.

Lingle's not to blame. She'd help the homeless if they had a lot of money.

Lingle is always to blame because she has an ugly nose and she looks like a man.

"Fortunately, contractor Ted Burkhardt is keeping a close eye on things — or at least, our photographer, anyway"

what's the address for his blog?

Not to insult you because your comments are always thoughtful even when I don't agree with you, but does KKCR give their hosts an IQ test? One of the guys hosting today sounded like a Rush wannabe.

that last photo was pretty funny :)

that last photo was pretty funny :)

Nope, I am correct. And you are, and will continue to be, deleted until you can lose the negativity and comment with respect.

once again proving you DON'T look for anything beyond the end of your nose. I live in Hanalei and therefore would be different than Kapa'a. Just TRY doing some research.

changes with the time change, but not significantly from Hanalei to Kapaa

Do you delete comments that provide you with accurate and or corrective information?

No, but so far you haven't provided me with accurate or corrective information. I never even mentioned the time of the moon rise, so I don't know why you're bringing that up. In Hawaii, the moon was full on Monday. If you wish to indulge your ignorance and believe otherwise, go for it.

go figure.
you must be a sickie, life is not just about creating jobs, and those who did the building over the Iwi are not the kind of people who deserve to live on Kauai. It's called respect, not just $$$$

"where the installation of his septic tank is currently under way some seven to 10 feet from two burials."
As mandated by the burial council under pressure from the Kaiulani and Rogers group.
Who would have thought.