Musings: Signs of the Season

The kolea are back. I saw my first one yesterday, on a stretch of mowed grass alongside a coastal road, wearing the light-colored feathers that give it the name Pacific Golden Plover. It looked pretty darn chipper, considering it had just flown about 3,000 miles nonstop from its summer home in the Arctic tundra, a trip that took it about 50 hours. They can even reach altitudes of 20,000 feet.

And we think we’re so cool because we invented airplanes. 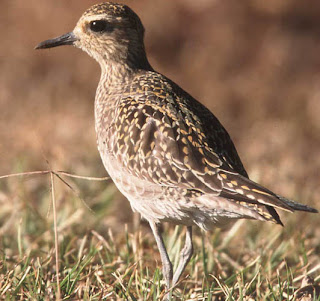 In reading up on them, I found that historically they were so plentiful that they darkened the skies when they returned, en masse, to winter in the Islands. But hunting, and in more modern times, feral cats, barn owls, habitat loss and collisions with airplanes, have reduced the population.

Besides seeing the kolea, I’ve noticed other indications that fall is on its way, like darker mornings, the subtle shift in the afternoon light, a certain limu smell coming up from the ocean, budding guava, hard-shelled lilikoi lying where it dropped from the vine.

Oh, yeah, and political signs. Great jumbles and masses and thickets of them. They’re such a blight, and are they even effective?

A friend was telling me about two big Carvalho signs he saw on a corner lot in Kapahi where hundreds of roosters are staked out next to their little A-frames. And if you look in between the signs, he said, you can see the ring where chicken fights are regularly staged.

“So what kind of message are they sending with that?” he asked. “That chicken fighters support Bernard? That Bernard supports chicken fights?”

And what kind of message is the County Council sending voters with its constant squabbling? A friend who is not a Council watcher had to attend the last Council meeting and said it really bugged him that he had to sit there and “watch them fight for a couple of hours. What a waste of time.”

Problem is that the public suffers, not only from the ineffectiveness of a dysfunctional Council, but also because we the people must endure the torture of sitting through these dramas while waiting to testify on an agenda item. It’s a very effective way to discourage citizen participation.

One campaign feature I like is Civil Beat's “fact check,” where they scrutinize the political hyperbole that candidates like to spew this time of year to see if it’s actually true. What a concept! Just imagine, taking the time to verify political speak, rather than repeating it unquestioned, like the Starvertiser and TV guys do while raking in all that advertising money from the candidates.

Maybe I can get my colleague over Got Windmills? to work with me on something similar for Kauai’s candidates. That is, once they actually start saying something.

Anyway, Civil Beat’s (formerly TGI’s) Michael Levine did a piece on how Mufi Hannemann claimed — falsely, it turned out — that he alone had attended public school. Later, his campaign spokeswoman clarified that Mufi was referring to public schools in Hawaii through the sixth grade. Oh, I see.

Now I don’t know about you, but I don’t really care where a gubernatorial candidate went to grade school — although I do care whether they sent their kids to public school. And I do care that in issuing such statements, Mufi is trying to make it clear that he’s “local” and Neil Abercrombie is not. Because being local doesn’t say anything about a person’s ability to lead, although it can speak volumes about their attachment to a certain way of doing things, an indebtedness to a particular system.

Of course, Linda Lingle wasn’t local, and she got elected, so it may not make so much difference in the governor’s race as it seems to here on Kauai, where it's tough for non-locals to break into the political scene, in large part because, well, they aren't local.
Posted by Joan Conrow at 9:16 AM

The problem is that before I can fact check what a candidate "said", unless I get it from their web site or hear them say it with my own ears, I have to fact check the reporting of TGI's reporters which often leaves a false impression, and/or is incomplete, half true or even completely wrong. When I read the "comments" on Leo's and Paul's "reports" I often see a fierce argument based on false information. It would be funny if it wasn't so sad.

But I'm working on it.

Lingle may have been elected in part because the Dems did not offer a strong enough candidate. Hirono lost consistently at forums as Lingle supporters packed the rooms and clapped and cheered. That also got on TV. Her PR was excellent, or at least, up to the task, Hirono just kept losing.

2nd term, it was Randy whats-his-name against Lingle. Oh, Iwase.

The newspapers also referred to her as a "popular" governor, but whether or for how long that was true, it didn't matter, because there was no credible opposition.

The good news is that the Council can't screw up the issues that will really impact Kauai, like climate change, the financial crisis and the price of oil.

Thank you for the photo of the kolea, and your observations of the subtle changes that indicate fall is arriving. I hope you will again post photos of the albatros as they make their appearance.

I have to agree with Andy on this one. TGI has become a tabloid and CANNOT be relied on for factual information. Take a look at the number of corrections that they make. Also, they are so biased when it comes to Bynum and Carvalho. I wish they would write stories that would benefit the reader, not their favored politicians. It's a rag but it's great for lining dog kennels and bird cages.

Heard my first Kolea call of the season a couple of evenings ago as I was cooking dinner. Every year there are two of them in my yard and I wonder if they are the same ones each year. If they can migrate to and from Hawaii like clockwork over thousands of miles they must hone in to the same location each time. Gotta marvel at that. Nature and all of its glory make politics almost insignificant except when politics impacts the magnificence of nature. Something that is happening all the time.

Mufi as governor is almost as scary as Lingle. One look at his backers and you can pretty much figure out his agenda. His lack of compassion in the way he has treated homeless from Ala Moana Park and the whole Waianae Coast speaks volumes about who he is.

Mufi would be no better than Lingle. He'll be good for business (at least those businesses that contributed to his coffers), bad for the environment and indifferent about public education.

I just read your August 11 post. We're like junkies. We know we're ruining the habitability of the planet but we just can't help ourselves. Jan T's blog was morbidly fascinating, too.