The other morning, when the surf was big and the sky was clear and the day was glorious and I had it free to do as I pleased, I headed north, in search of beach and a view of the breaking waves. I hadn’t planned to stop at Anini — although stunningly beautiful, it’s not my favorite, because it’s lined with houses — but something told me to turn on the road to it, so I did.

Now Anini isn’t one of those beaches where access to the coastline has been blocked. No, there are several easements running between the lavish homes where the public can reach the shore.

Problem is, once you get to that beautiful white sand you’re kind of screwed, because if there’s any swell at all, and/or the tide is high — when I was there it was dropping — you can’t actually walk along the beach unless you’re willing to go into the water, which was about thigh high on me, and so overhead for Koko.

And why? Because the naupaka and other hedging materials fronting the houses that line the beach have spilled over so far into the public shoreline as to impede lateral access. It was easy to tell that encroachment had occurred because I could clearly see the debris left on the beach by that morning’s high wash of the waves. In some places the yard vegetation extended four, six, eight feet out onto the sand, which was pretty much all it took to hinder movement along the beach. 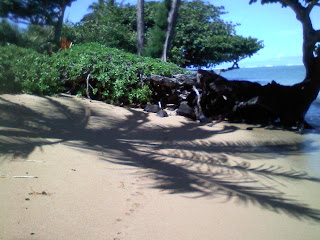 This picture offers a good example. The high wash of the waves, which marks the extent of the public beach, went all the way into the naupaka on the far left side of the picture, which just happens to be the hedge for the house behind it. You can see that the beach is effectively blocked. 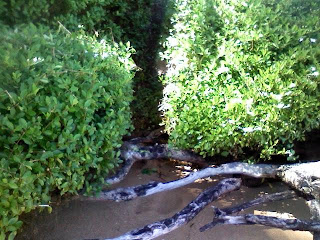 In this picture, you can see where someone kindly cut an opening in the dense hedging material — and this isn’t a species that grows naturally on the beach, so I knew it had been deliberately planted — to allow people to get through. But they are delivered into a small space that is blocked on the other side by more hedging, creating a semi-private cove that no doubt is a selling point for the vacation rental it adjoins.

The houses for which our beach had been sacrificed were empty. Oh, I saw some yard guys mowing the lawn in one place and a cleaner in another, but no one was actually living in them. They were just there, being held in near-perfect readiness for the tourists who can afford the high rents along that stretch of coast, which used to be a place where local families camped. Now it’s been turned into another resort — an exclusive one, where the public is clearly discouraged.

The yards all had their Alert Alarm and Diebold security signs on prominent display. But the owners apparently don't realize it ain’t the public they need to be worried about, it's the ocean they had to build so damn close to. Because one of these days, it’s going to be rushing right through those fricking houses.

Turning my back on the houses, I sat huddled next to one of those hedges on a tiny bit of sand that wasn’t being washed by the waves and gazed at the splendor before me. The waves were rolling in, sending up a cloud of mist that billowed up from Kalihiwai, and beyond that, the lighthouse and Mokuaeae and Crater Hill. The temperature was balmy, and the sky was inhabited by white puffballs. It was picture perfect, but the joyous happiness I’d felt driving up there had been dimmed by what had happened to the beach.

And therein lies the rub. It’s not just that my way had been blocked, but my entire experience of going to the beach had been marred because all of a sudden I was thinking about how fucked up Anini had gotten, when I really just wanted to be there relaxing, enjoying the day and the beach.

I know I’m not the only one who feels that way when confronted with this kind of beach degradation all around the island, particularly on the north shore. So in order to avoid feeling junk, we start avoiding those places. I don’t know how many locals have told me they stay away from this place or that because it’s been handed over to the tourists or you can’t get there or you can’t fish there or they feel so bummed about what’s happened to it, or so uncomfortable with the ritzy resort scene, that they don't want to be there.

But I thought, no, we have to keep coming to these places. We have to keep using them and we have to keep bitching when our access is cut off and private landowners are encroaching on the public beach and the county is allowing people to build too damn close to the water and the state is approving bogus shoreline certifications.

Because if we don’t, if we all just keep going along and allowing this crap to continue, then one day soon — hell, it's happening already — we’re going to turn around and find something very real and tangible — the coastal access that is supposedly so cherished in "all beaches are public" Hawaii — is gone.

Gone in exchange for the money, honey.
Posted by Joan Conrow at 6:55 AM

Do not believe that at all, by law the public is entitled to use all the area below the high wash of the waves. And this weeks waves are by no means the highest waves .

Our beaches are now occupied by copious amounts of manicured plants where we used to walk.

Not denying that there is beach encroachment. Just saying that by definition, once a year there is no public beach to traverse.

what definition are you referring to?

Cite the law or shut up, because you are full of it on this one.

No, you're just talking shit.

That's probably giving too much credit. You should say they are sophisticated enough about this law that they ought to be able to work out the logic of the fact that since the shoreline definition is the high wash of the waves at the seasonal high tide, then during the seasonal high tide, all of the public beach is under water. Of course, there are always holdouts in the face of logic, so don't expect everyone to agree.

Seems obvious to me.

" then during the seasonal high tide, all of the public beach is under water."

There's just one problem with your "logic." Wash is not synonomous with inundation. So even if the waves are washing up to their highest point, you can still traverse the beach -- unless it's been blocked by impenetrable vegetation, as was the case when I was there. And that day was by no stretch the highest seasonal wash of the waves.

Must be time to move on Fiji, west Australia, New Zealand, Marquesas and perhaps India. Plenty of beaches out there.

"Must be time to move on Fiji, west Australia, New Zealand, Marquesas and perhaps India. Plenty of beaches out there."


That's fine for the newbie "anomollies", the rest of us need to rip these illegal fru-
fru fences out. Just think, it's job security for the under the table landscapers.

Don't let the door hit you in the butt!

True, if you're willing to let the water come up around your feet you can scamper down the public beach at the seasonal high tide. You won't be picnicking or sunbathing though, on the public beach.

Thanks for sharing your experience with those of us who can totally relate. Anini or more correctly Wanini for those who have been around long enough to remember was a place for torching or night fishing. The papa was momona with all kinds of mea 'ai. Pretty certain it is no longer as bountiful. Gone are the simple beach cottages with huge yards for games of volleyball and family gatherings. I avoid those places preferring to remember them as they were. But what of the few locals that live in those places? What do they do? They can't choose to stay away like me, its where they live.

regrets, I'm hoping you continue to have them, however, things change. Keep your memories, continue to live in the past, if that's what makes you happy, but stop complaining and live in the here and now.

Did you see this article:

Jan T had a blog post about coral bleaching a while back and another one on declining phytoplankton. No beach access, dead coral and no food for fish. If only we could live in the past.

Things change but not always for the best. I'm talking about a sense of place something you don't have an appreciation for. This is my aina hanau and I can complain about changes that benefit a few who aren't even from here at the expense of most locals. just like how you can rudely ridicule me.

"changes that benefit a few that aren't even from here at the expense of most locals."

So obviously true. Thanks.