A thin blanket of clouds cast a softening haze over the moon, which is dwindling fast, yet still was bright enough to cast our shadows when Koko and I went walking this morning. Venus, just an arm’s length from the moon, was similarly subdued, and so a plane approaching the Lihue airport assumed the brilliance of a planet.

In the east, the sky shifted from pure dark to pink upon black to scarlet upon gray, and then it faded for a time, gathered strength and returned as a vibrant orange-red, creating a fiery screen behind which the sun could rise.

I happened to travel north recently and noticed the dust screen is down from the new miniature golf course that’s been built along the highway in Kilauea. There it was, its tacky little presence looking even cheesier against the splendor of its mountain backdrop. I’m not sure what bothered me most, the grotesque fake pohaku or the thought that another Kauai landscape has been phony-ized, and thus trivialized. Whatever it was, my heart sank.

Then today in The Garden Island I see an article about how kids were brought over there to install native plants and while it’s always good for kids to get their hands dirty and grow things, I wondered about taking a school field trip to such a place and the message they were receiving. Forget the dry and wet forests, kids, native plants have now been relegated to landscaping materials for a miniature golf course. This is where your futures lie, kids, in something that’s entirely contrived.

It’s billed, in the highly promotional coverage provided by the newspaper article, as “much anticipated” and the community’s “new gathering place,” and I thought of how that community’s gathering places used to be Kahili and Kalihiwai beaches, where they’d help out with a hukilau, and Kilauea School and the dispensary and the neighborhood center.

And now it’s going to be a miniature golf course. Kind of speaks volumes about what’s happened up there, like at nearby Kauapea Beach — oh, excuse me, I mean “Secrets.” I recently went there via the main public access, a place I hadn’t been for a number of years, although for a time, I walked it daily.

The parking lot used to be secluded. Now it’s surrounded by massive houses, all of them vacation rentals and/or second/third/fourth “homes.” 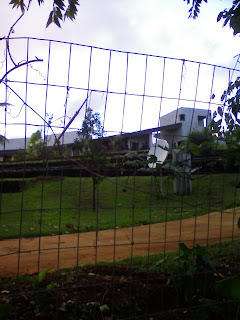 Another monstrosity is under construction, right up next to the trail head. 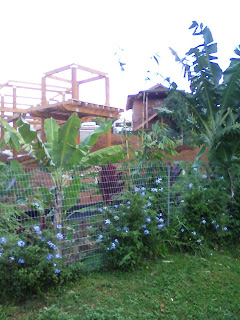 Stunned, I proceeded down the trail, which hasn’t changed much, except it’s more open now, and arrived at the beach, where I saw the dirt road that had been illegally made, then given an after-the-fact permit for “security and maintenance purposes,” has now been paved in concrete. 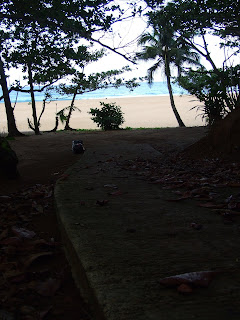 I could only imagine how much water must be channeled down that driveway during Kilauea’s legendary heavy rains. But hey, it makes it easier for the gardeners to go down and rake up and bag leaves. Because you surely wouldn’t want any leaves decaying on the beach.

I didn’t want to go south, because I knew I’d get bummed out by Michele Hughes’ scene on the bluff above the beach there, so I went north and soon saw that the landowners had cut down all the ironwood trees along the bluff top. Apparently they want the unobstructed view more than the protective qualities of trees that help stall the erosion that is causing the bluff beneath their lavish homes to fall away in massive chunks that can be seen on the sand and reef.

Then I ran into a trail down the bluff, a trail that I knew to have been made without a conservation permit, a trail that runs right through a shearwater colony and that had been refurbished in the middle of the nesting season. You can see the burrows, some of which still had chicks inside. 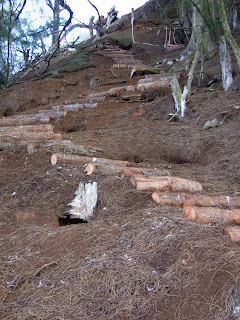 At the bottom of the trail lay what appeared to be a dead Newell’s shearwater. Auwe. 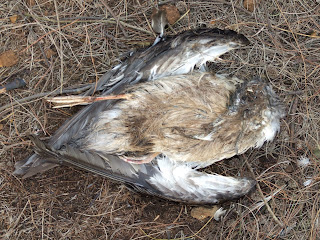 I did find joy that day, in the tropic birds that swoop and soar overhead, the ruddy turnstones that take flight in a twittering flash of white, the tiny waterfall formed by waves breaking over a rock, the patterns made by sea upon sand.

But I also felt sad, like I so often do when I see the gentrification of a wild place that I’ve always cherished, and as I walked up the steep trail, I thought about why.

Change happens. It’s a part of life and I generally embrace and accept it.

Joan, the Anaina Hou projects were conceived after many meetings and discussions held with the Kilauea Community Association and members from the community as to what the COMMUNITY wanted to see there. One of the biggest concerns that we expressed upon was the need for activities for the youth and families. So you attack the cheesy-ness of the miniature golf course and mock the fake pohaku. Would you have rather they gather real pohaku from the `aina instead? Would you rather they have NOT put in non-native Hawaiian plants and use exotics and invasive non-natives instead? The botanical gardens designed into the miniature golf course is an excellent idea that will inform and share of Hawai`i and Kilauea history as well! This doesn't send a message "to forget the wet and dry forests of Kaua`i" as you suggest. Quite the opposite in fact! Kids could just go and recreate in many places. But how many of those places offer opportunities to learn about Hawai`i history and Hawaiian plants as well? I've attended several meetings as a member of the Kilauea community where my family and I have lived for 40+ years. Because we have been part of the discussion with project leaders, we know that we won't see clowns, windmills and goofy props that you would usually see in a minature golf course. What about the park and ride facility, the commercial kitchen and nursery? Maybe you prefer the original zoning for an industrial park or a shopping mall which were initially planned for that site? We look forward to a theatre and an outdoor amphitheatre for local performances by our children, musicians and local halaus. For years now the Kilauea Theatre has not operated as a movie house where kids can enjoy going to the movies. It's been turned into a church instead. We also look forward to the commercial kitchen where local growers and farmers and community groups can process their produce items for market.

Before you pounce all over the Anaina Hou project, do your homework and check out who the community leaders are that make up the Kilauea Neighborhood Association. It's a far cry from the "community associations" of Princeville, Kukui`ula and the like. Yes, there are huge estates and mansions owned by the wealthy. But Kilauea is still a close-knit community with many families that have been there since the plantation era. We are one of many. Kalihiwai and Kahili beaches are still gathering places for our keiki and `ohana. We still hukilau and mahele fish to those who come to help and even those on the beach when those ocassions occur. Kilauea School still maintains its authentic May Day celebrations with Hawaiian music and hula and a May Day Court of Island Princesses in traditional holoku - unlike other schools that feature hip hop performances by students.

It's funny how outsiders (like you in this case) come out criticizing and attacking with such negative comments without the substance of the history and chain of events that went into the planning and producing of this project. I'm sure the arrogant opposers who are intervening to stop the building of Anaina Hou's amphitheatre project at Kalihiwai Ridge are applauding your blog today.

great post Diane Y!
i like Jack Gushiken's concept of using the plantings to timeline the history of Kaua'i at this, the old Metcalf farm that was rezoned light industrial decades ago.
i also found out that it is only a handful of the board of directors of the K_Y Ridge comm ass'n that oppose the project and not most of the members who are huhu with the way they voted to use their dues to hire atty Tagupa.
such graphic pics!

I understand both points of view. As someone who grew up in Kilauea in the 60's during the plantation era when the entire student body was about 100 at the school, I lament much of the change especially the area of Kaupea. As kids we entertained ourselves with fishing in fresh and sea water, crabbing, swimming at slippery slide and the neighboring beaches of Kalihiwai, Kahili and Kaupea. At night we'd enjoy the occasional movie at Kilauea theater or a Friday night football game in Kapaa. We camped a lot and spent summer nights torching on the reef at Anini or building a bon fire on the beach and talk story. It was a much simpler time. True country living. Times have indeed changed and its a plus to have alternative activities without having to drive out of Kilauea altho miniature golf wouldn't necessarily been my choice. I like the amphitheater idea for cultural events etc.

I too drove to the North Shore this weekend and viewed the estates overlooking Kaupea from Anini and wondered how much soil ended up on the reef when they graded the hillside to build their mansions. We use to walk through pasture to get to the small falls that ended up in the ocean. I'm sure I wouldn't recognize the area. Its long been fenced and sanitized to fit high end vacationers.

It doesn't really matter if the community wanted it. We ALL have to look at it when we drive by and its ugly.

No. You don't have to look at it! Just look makai and enjoy the overgrown pasture of invasive weed grass!

Typical of fringe actors to couch things in 100% black/white alternatives.

Maybe we should just ban having kids such that development won't be needed in a few decades.

r u always this morose?

Yes.....so Hawaiian! Miniature golf with "local plants". Hey where are the statues of Pele, Kamehameha, and Queen Liliuokalani? That would really make it special no?

You gotta be kidding! "for da kids"?
for history of Kilauea?

Take your "mainland values" back to the strip malls where you came from.

Dr Shibai would sure be disappointed to see all the native Hawaiian kids who come out for the Junior Golf program every year. They're parents seem to like golf a lot, too! :)

Speaking your truth and pushin` buttons! :) Keep on keepin` on Joan!

Will you be doing a follow up on the birds vs KIUC program?
I've some questions on the statistics used.

I'm sure I'll be covering the issue further, on the radio and/or in print. What are your questions? I'll see if I can get an answer. You can post them here, or to go the profiles section to find my email.