A light rain ushered in the chilly dawn and heightened the scent of angel’s trumpet and eucalyptus when the dogs and I went out walking this morning. The sky slowly brightened, revealing patches of blue overhead, but the sun preferred to stay snuggled under its dove-grey quilt, sending out just enough rays to make the summit of Makaleha glow green. The dogs poked around in their usual way, sniffing the various remains of road kill, predominantly chickens and mynah birds.

A friend called on Saturday afternoon to report he’d just witnessed two women tourists in a white Mustang convertible run down a nene as a pair of the state birds crossed that wide-open stretch of highway in Mana. He was headed out to surf the Westside and signaled for the car to slow down, but it didn’t, until it was right upon the birds, and by then, it had killed one.

The car proceeded on, so he turned around and chased it down and when he finally got the driver to pull over, asked if she knew she’d just killed a federally endangered species. Yes, said the driver, but we didn’t mean to. He then returned to move the bird off the road, and said the mate was still hanging around, forlornly. 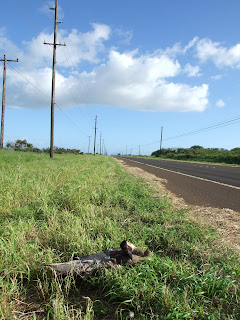 He called to ask me to what to do, and upon my advice made a report to the police, which required a trip back to the Waimea substation, and called the DOCARE hotline — actions that cut into his surf time by a good 45 minutes. But that's no problem when you've got the aikea, rather than the ainokea, attitude.

I was hard at work on a story, so on his way home, he dropped me off some dinner he’d picked up at a restaurant in Lihue.

“Good thing they put it in this illegal plastic bag,” he said, pulling out the dripping styrofoam box, “because it had huli on the seat.”

“Maybe they’d go for getting plastic bags back in return for using biogradable containers,” I suggested, which turned the conversation to my last post. It elicited some interesting comments, like the one that read:

On Maui their landfill is in the middle of the saddle and thousands of bags blow onto the aina in plane sight. Maui County budgets $100,000.00 a year to clean them up because they are visible. On Kauai our bags blow from the landfill into the ocean where they are not as visible. The bag ban is the right thing to do and will have a big impact.

And that got me wondering, isn’t it the county’s responsibility to make sure that stuff thrown in the dump stays there? And if plastic bags are getting out, what else might be escaping into the ocean, and soon the neighborhoods of Hanamaulu if the new dump gets approved there?

I also found it intriguing that the plastic bag ban is seen by some as yet another chapter in the ongoing saga of locals vs. haoles:

Guys like Ben Sullivan, Tim Bynum, and all these environmentalists are so out of touch with our way of life because they are not from here. They have your typical "missionary" menatlity. Let's save the natives from themselves. Do us a favor and go save your hometown. Local people here already know how to recycle. We have been doing it before by using it in our trashcans. Surfers and watermen use it for their clothes. Gardeners use it to bring fruits over to the neighbors. This law is just a politcal statement. The impact is minimal. Ohhh this is a first step. Please....Ben Sullivan and Tim Bynum and friends, my advice to you. Go hangout with some real locals instead of just socializing within your little social circle. Then maybe you will know a little about our community. You mainland style is to stuff your crappy progresive beliefs down our throats. But really, all you are here for is to take advantage of our Aloha.

But my friend who called about the nene and brought me dinner is a local, and he thinks the bag ban is “well-intentioned,” even though he doesn’t recycle or bring a cloth tote to the store. So it’s really hard to generalize about people and their beliefs and behavior.

I told him I’d been thinking of the comment that John Harder made, about how no one ever has a reason to buy bottled water and so it might be the next item targeted.

“There are so many things that no one really a reason to buy,” I said, “like disposable razors and disposable lighters and Hummers and 8,000-square-foot homes, and straws, unless you’re an invalid. But just how much do you want government to intrude into people’s lives?”

“Isn't that the Tea Partiers line?” he asked.

Yes, and I hear they want to cut defense spending, too.

I prefer to educate, not legislate, and offer incentives for people to change their behavior, which is more of an anarchist, rather than Tea Party, approach. And that brings to mind a thoughtful comment left on another post:

Much of the literature on the tragedy of the commons focuses on saving the global commons through increased centralization and regulation, at the expense of the individual's autonomy and psychological sense of community. "Utopian" speculation in general and anarchist political analysis in particular are necessary correctives to misplaced attempts to merely rearrange the elements of the status quo rather than to radically alter it in a direction more in keeping with both survival and human dignity.

In other words, the only way the world is going to change is through a change in consciousness. And that’s not something you can legislate.

Still, as one reader noted about the plastic bag ban in an email:

It is a start at getting us used to changing our behavior. Maybe the "feel good" aspect and the visibility of this change has the advantage of making us feel good about actually doing ... anything and greases the mental skids a bit for more changes of greater consequence (and maybe greater inconvenience) in the future.

I know there is a long way to go, but I still see this as a step in the right direction. You know the old "journey of a thousand miles..." saying. I guess it isn't all that important if the first step is a big one or a small one. It was the getting up and getting ready to take that first step that was significant. We just have to be sure we don't sit back down now before the second step.
Posted by Joan Conrow at 9:08 AM

I am "local" and my family has been here for many generations. I and a lot of locals support the plastic bag ban!

So what?!!! The inconsiderate tourist lady escaped the wrap/fine of killing the nene? I'm curious to know if Joans friend passed on a license # of if the enforcement guys had the opportunity to stick her with a fine? That is so uncool. "I didn't mean to", she said. Afterall, it's just a bird and birds and other creatures in nature don't have feelings like humans. Unbelievable, it makes me want to run her over!

My friend did provide a license number and the state guys said they would follow up. If I learn more about what happens, I'll post it.

Looks like an isolated stretch of road. Your friend should have shot the tourist and her companion. I keed, I keed.

They come to Hawaii to experience the place and culture, all the while running over a Nene in their "rush" to get to Polihale. Clueless...and a lack of consciousness as your title implies. It is sad when one dies as they mate for life. Whenever I see them flying in the sky I am saddened when I see an odd number because I know one has lost a mate.