Musings: On the Fence

At the beach, saturated in shimmer intensified by the wind-roughened ripple of the sea’s surface, looking for glass glinting in white light low on the horizon and finding that today it was delivered in cubes, rectangles, squares, while on other days, all the glass that washes in is triangle-shaped, and still other days, a mix, and I wondered, was it a factor of sand, current, tide, or sheer coincidence, and was the same true at any other beach?

The fence went up at the Lepeuli Beach trailhead yesterday, blocking off the lateral access.

And the world did not end, even though Bruce Laymon had clearly tempted fate by installing it on May 21.

I didn’t know it was going to happen. I just happened to be in the neighborhood, meeting a friend who said, “I heard the fence went up this morning. I thought you might want to check it out.”

“I expected protests,” she said when we got there. “But there’s nothing.”

“Well, there’s not much anybody can do about it now, except cut it or climb it, and either way, they risk arrest.”

It’s a strong and serious fence, with barbed wire around the top and numerous red-lettered signs that proclaim PRIVATE PROPERTY NO TRESSPASSING. 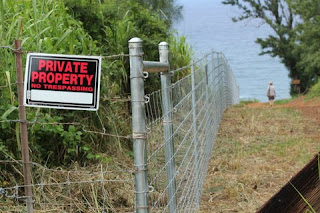 Still, I totally understand why he did it. Keeping cattle in is only part of it. Quite frankly, it’s the only thing that would keep me, and everyone else who has ever used that path, out.

Besides, let’s not forget that there is, after all, another perfectly good access right there, and it had been freshly weed-whacked to make its presence quite clear. 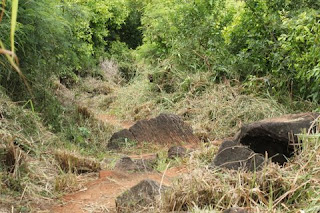 “That’s it?” said my friend. “From what I’d heard, I thought you had to scale rocks, risk life and limb. It doesn’t look bad at all.”

“It's not,” I replied. “That’s been totally overblown. Most anyone could go down it.”

“Except, for some reason, the nudists,” she said.

Later, when I got home, I found an email with photos that lateral access advocates had sent around, including one of three women, with the caption:

And red shirted Nyoc-Lan Pham who was on a family pilgimage.
Her husband died at Larsen's Beach 11 years ago.
She wanted to see the beach "and touch the water" where her husband died..
Unfortunately a head injury a couple of years ago has left her weak.
Her family tried to lead her down the steep trail (one in front, one behind) but she couldn't make it.

I wonder, did those who heard her story suggest she call Bruce? Because I’m pretty sure he would have been happy to drive her. And did her husband drown because the lateral trail made it oh so very easy to access the dangerous waters of that beautiful beach?

I know that some are very worked up about the fence. I’m not one of them, primarily because we still have an access. Anyway, I believe it’s going to be better for the albatross and shearwaters, because it encloses the area under the ironwoods where they like to nest. And if it does, indeed, discourage the hordes, then it will also help resting seals and nesting turtles, which benefit from fewer humans in their midst.

I am, however, very interested in the question of whether the trail it blocks is a traditional ala loa — an issue that will be decided by the courts, and not Bruce Laymon’s fence or those who prefer to sunbathe in the nude — an activity I do not, btw, in any way oppose. I just never could understand why they couldn't use the public trail.

At the moment, I’m more concerned about the future of the ag lands that front and surround that still wild beach — lands that are owned by the nonprofit Waioli Corp., which so far has resisted pressure to sell; Falko Partners, whose future development plans can be guessed, and Tom McCloskey, who currently has a big chunk on the market at a price that precludes anyone growing something legal.

Do we really want our coastline to be Luxeville all the way from Aliomanu to Ke`e? Because, you know, that’s exactly where we’re heading.
Posted by Joan Conrow at 11:40 AM

Iʻm glad McCloskeyʻs name has come up again.
THE BERM: the privacy enclosure for Kealia Kai development is over 20 feet now.
I specifically remember in a county council hearing that one of the conditions imposed was that (at that time) the one and a half foot berm was to come down.

Iʻve tried with this county but itʻs not important to them.
Itʻs important to me. That is a stolen view plane that used to belong to the public so we might enjoy a little of this island too, not just the nouveau-riche trailer trash.

The only view one saw before Kealia Kai went in was sugar cane fom the highway to the edge of the bluff. Except during harvest and planting.

The landscaping plants are tall not the "berm". The plants actually enhances the view unless you like looking at examples of poor house design.

Wrong.
The entire view plane has been obliterated. It used to be about a two minute stretch of ocean when driving by.
Ok it may be more plants/shrubs but the actual berm was built up.
Enhance what? All you can see is a blockade.
Iʻve been watching it and seen it expand.
Why else would there be the condition to remove it if it didnʻt exist.

Too many of our wild & natural places that make Kauai what it is are getting "too accessible." The paved path across Kealia / Donkey Beach for the rich homes are an abomination in my opinion. This is NOT Maui nor Oahu & I hope it never will be.

That path gets compliments from locals and tourists. Why would the homeowners care. They are having cocktails on their verandas while old and young are walking next to the ocean. Both are loving life.

That's what maui said before they were forced to change in order to keep their increasing population fed and housed.

This fence is not a "nude" issue, it is a public access issue. The public has been using this, now fenced off, trail for decades without interference or even comment from the land owner. That is, until Bruce Laymon obtained the lease following the Meadow Gold departure. Since then there have been concerted efforts by Mr. Laymon to reduce or even eliminate public access to this unique beach area.

Of course part of the problem is that the county PW Department has never lifted a hand to make the official public right-of-way (not the recently granted easement) accessible since the land was procured in 1979. Had they done so there would be no public access issue at all.

But, to get back to the issue at hand, the actions of Mr. Laymon are so blatantly against any public access that he would install this fencing in defiance of his landlord, Waioli Corporation, rescinding the DLNR Conservation District Use Permit issued for that purpose. He is in violation of state law if any of that fencing is within the Conservation District, the bounds of which are in question due to modification of shoreline definition.

Anyway, it now seems that either legal action is necessary to validate the location of this fencing or we just continue to let Mr. Laymon run roughshod over the aina as he has done so many times in the past.

The public nudity, which by the way, is against the law in Hawaii is a problem.
I was down there about a month ago, at the end of the steep walk, first part of the beach, visible by all.
A family with 2 kids played around for about a half hour then proceeded down the beach. In the meantime, a woman and a man appeared right behind me. When I had turned around I saw the woman stripped down and proceeding to sit down on the sand (no towel) with her legs open.
Against the law, regardless, this was out and out OFFENSIVE. Ruined my day and still canʻt get that image out of my head. Thank goodness the family hadnʻt made it back yet. I yelled at her and him to put their clothes on cause thereʻs children around and itʻs illegal here. Get in the bushes...which they finally did.
They had to defend with the usual crap...itʻs our right, nudity is beautiful etc.
It was NOT beautiful from where I was standing.
ugh.
Donʻt sit on the bare sand. Things will attach and follow you home.

I know a lady about 80 years old that goes there to fish. She hasnʻt been able to access it lately because she doesnʻt have a car now and canʻt get over there and her kids wonʻt drive her cause theyʻre doing other things.
But she walks down....and back up.

If the damn hippies and gay men werenʻt making spectacles of themselves and crapping in the bushes and coming up to people flaunting their junk, we would nʻt be having this conversation.
And, the fence is very ugly.

Joan, Mahalo for your empathy for the physically challenged, brain damaged, and fraile.

Nudity is the most basic of human rights. Priggishness is highly offensive. Please don't hate me for my beauty - Sassa