I woke to the calls of Newell’s shearwaters — as in more than one, what sounded, perhaps, even like several — and as I drifted back to sleep in the dark stillness of 4 a.m., I felt a surge of hope for this dwindling species. Later, walking with the dogs beneath pink spider webs that spanned a yellow sky, past aggressive stands of guinea grass and African tulip, as hundreds of roosters roared, I was brought back to reality.

I don’t mind the roosters; it’s the fighting of them that disturbs me, the joyous cheers that arise — mostly from men, with the voices of a few women and children joining in — sometimes accompanied by the beating of a drum, when some poor creature is getting mangled and bloodied. It’s a creepy way to get your kicks, make money.

As a friend noted, if people want to beat each up other up, that’s one thing, but leave the animals out of it.

That was the feeling I had when a friend sent me an email about ”war dogs” — the canines used by Navy SEALS and other branches of the military to do their dirty work.

It included a number of offensive photographs that showed how people take advantage of a dog’s loyalty to teach it to do things it normally never would, or should. 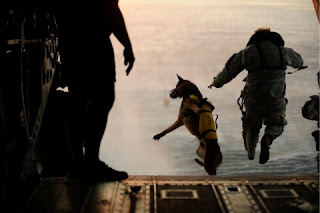 I did a bit of checking around and found The New York Times had covered the issue, reporting that Gen. David H. Petraeus wants even more dogs than the 600 currently enslaved in Iraq and Afghanistan. It seems they have many uses, besides sniffing out explosives and running down “suspects.”

Finally, dogs can be used to pacify an unruly group of people — particularly in the Middle East. “There is a cultural aversion to dogs in some of these countries, where few of them are used as pets,” Major [William] Roberts said. “Dogs can be very intimidating in that situation.”

And isn’t the military all about intimidation, especially when it’s an occupying force? Kind of like the Kauai cops who confiscate the badges and identification cards of Hawaiian nationals.

It seems the Brits are also getting into the act by training their own high-altitude parachuting pooches:

Once down in hostile terrain in Iraq or Afghanistan, the dogs will be sent in first to seek out insurgents' hideouts with tiny cameras fixed to their heads.

An SAS source said: “The dogs will be exposed to very high levels of danger on these operations and you never know what’s going to be behind a door. Nobody wants to see the dogs get killed but if it’s their life or a man’s it is obvious which the CO would prefer.”

Which brings me back to the post cited in the original email:

As for the ethics of sending dogs to war, that’s pretty much a moot point,  don’t you think? If it’s ethical to send humans into combat, then why not  dogs?

Still, I suppose we’re supposed to feel heartened by this revelation:

At least the U.S. now treats its war dogs as full members of the military.  At the end of the Vietnam War, the U.S. combat dogs there were designated  as “surplus military equipment” and left behind when American forces pulled  out.

Or as my friend noted in his own comment on the email:

And we just gave the Pentagon another $50 billion to blow over the next decade. Whee!
Posted by Joan Conrow at 8:25 AM

I don't understand Christians and their dominion over "lesser" creatures. And make no mistake: the US military is very much a Christian institution. And so it goes.

Dear Oft Deleted,
If you have nothing better to do than leave five comments bashing me in as many hours, you really need to get a life. Perhaps you could do something worthwhile for the world!

Dolphins have been trained and used by SEALS to attach bombs to the bottom of ships for decades. Strapped to their backs with a magnetic release that attaches to the shipbottom.

All "weapons" useful in war. They (except dolphins) have been used throughout the ages.

And the Irish. Edward II used them in front line initial attacks to avoid English causalities. Use them to wear the enemy down.

Ah...God invented alcohol to keep the Irish from ruling the world.

Irish racism is an oxymoron...I'll drink to that...we Irish have extra thick skin.

Let slip the dolphins of war!

Show me the morality in war?

Are our wars better than "their" wars. Do we torture more humanely than they? Are we justified in killing the innocent people or dogs for a political financial ends and gain... under the guise of "freedom and democracy".

Wars do not solve anything. Make money for those who start them and employ many who depend upon them for their financial survival.

You have to twist your Soul out of shape to justify killing.

Nothing real Christian about killing. What Jesus do you believe in? The one with the sword or the one passing out the loaves and the fishes?

The Golden Rule? What's that?

"He who has the gold makes the rules"

In 1999, the US military killed 200 service dogs. In 2000, this practice was stopped by a law. Do something make a difference. Which of your politicians did you write about your concrerns?

What do you expect from a country that gives multi national corporations (with no particular allegiance to this country) the same rights as its citizens?