I attended the Kilauea session of the county's Important Ag Lands meeting yesterday, and you can check out my full report at For Kauai.

I found the IAL meeting to be fascinating, primarily because of the profound questions about our island’s future being raised by this process. To me, the main one is this: do we really want to become food and energy self-sufficient?

Because as I found out, we do have the raw resources — land, water and sun — to make that a reality. So is that what we want? I’d love to see more island-wide discussions on precisely that topic. Because if we decide as a community that we do want it, I’m sure we can overcome some of the other obstacles, like farm labor.

But whether we’ll have such a discussion remains to be seen. A lot of people are pretty fixed on the idea that the boats and planes will keep coming and Costco will always be full of super-sized stuff.

For others, the thought that we might have to function independently and self-sufficiently, either as an island or an archipelago, is too scary to consider because it means, as one friend described it, “a total collapse of the system.”

But rather than take the doomsday approach, why not look at is as a chance to gain more control over our existence, to pursue true community-based development, to maintain the island’s rural lifestyle that so many of us cherish?

Because right now, we still have that option, and if the economy does rebound, and development resumes, that’s not going to be the case for long. On the other hand, if the economy tanks and we do have to fend for ourselves, it’s best we get started now.

At any rate, though we’re two years into the IAL process, it’s only at the beginning, in terms of the political process that will determine the ultimate outcome.

And while the maps and other documents that Dr. Karl Kim and the IAL team have compiled provide some way-cool planning tools, the IAL process has also raised a lot of tough questions.

Like, do Grove Farm and A&B get to keep all the water in the reservoirs that feed the acreage that they’ve set aside as IAL, since water is a key component of that designation? Or do they still have to return some of that water to the streams?

What role do seed corn, and even coffee, play in a self-sufficient future, seeing as how they’re our number one crops, in terms of acreage and value, but they don’t generate food or fuel for local consumption?

And how can we get more people involved in crafting answers to these questions, plotting our island’s future? 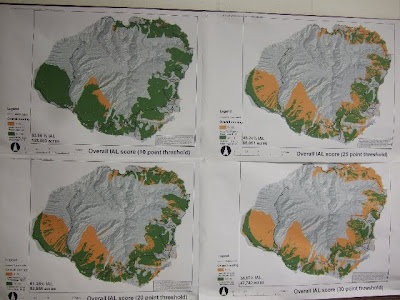 Do you really think that mainland America would jettison this state?

Or are you reading way too many dystopian novels?

I believe that things will remain pretty much as normal, other than prices. All will be available to those that can afford it.

And therein lies the problem: Kaua'i's (and Hawai'i's) complete dependence on the failing/collapsing American economy. Hawai'i was once self-sufficient. No more. America's destructive addiction to the dollar is destroying it and us too. Time for change. Occupy Kaua'i. Get rid of the stacked deck. Let's have democracy.

Would you really accept a vote that didn't support your position.
If so there have been elections every other year and the voters have spoken.

And what if public opinion goes against going back to an agrarian culture but instead desires more "tropical affluence" fueled by mainland and foreign money?

What if public opinion wants better infrastructure and social services that only tax revenues on developed land can bring?

I'd love to see a real poll based not on "one person - one vote" but weighted based on either percent private fee simple land ownership or percent tax dollars paid. You own more land or pay more taxes...you get more votes. Kind of like the "percent common ownership" thing in condos where the votes of people owning larger units get more weight than the people owning smaller units.

Not everyone...maybe not a majority based on weighted or unweighted poll votes...wants self sufficiency.

Hurricanes Iwa and Iniki ring a bell? Food prices threw the roof is all the incentive most people need to want to be self-sustaining.

Hurricane? Nope. Supplies would simply fly into another island and be barged over via Matson/Young.

Trouble on mainland west coast? Nope. And extremely doubtful. Supplies would come in from other parts of the country.

More expensive for a while? Sure. The plan is to afford it.

Thanks for the update Joan. Please keep a close eye on this process. The Great Mahele may be minuscule in comparison to the profound changes these decisions will have. Aloha.