Musings: All Over the Map

The thermometer read just 68 degrees and I could hear a lot of dripping from rain showers that passed in the night when the dogs and I went out walking this morning. A few stars were spattered across a sky shared with shapes I knew to be clouds, though it wasn't yet light enough to discern texture and color, and so a sense of the weather the day might bring.

Paele, always slow to wake, balked at the wet grass, but Koko charged on, leading us both, as she did when we took the eastern ascent, from the Houselots, up onto the belly of the Giant as the sun rose yesterday. And as always happens when I'm out around tourists with my poi dog pair, I was asked repeatedly, “what kind of dogs are those?” One man even took a picture.

I was more struck by how much open land — agricultural land — remains between Lihue and Kapaa, and as I gazed out on it, I thought, that's our “bread basket,” right there. Close to markets and labor, plenty of water and sun. 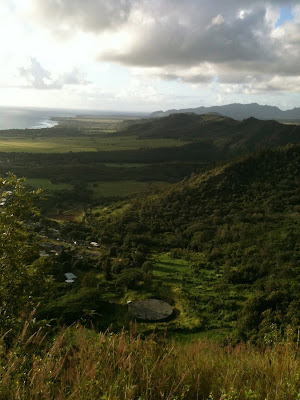 Yet the stuff on the makai side of Kalepa Ridge is under the jurisdiction of Hawaiian Homes, which at one point planned massive residential development there, financed by another resort near the Wailua River mouth. We know that ain't gonna happen, at least not any time soon. So couldn't it be farmed in the interim?

And though the acreage on the mauka side of the ridge is “state” land that has actually been designated for “we the regular people” kine ag, it's languishing in governmental bureaucracy. Meanwhile, pieces are being poached here and there for projects like the mayor's new dump and that albezia-to-energy debacle.

Oh yeah, we're all committed to agriculture — so long as it's GMO seed crops and “solar farms.” Our addiction to profit and energy has turned us into those little cocaine-addled lab rats that choose blow over food. Speaking of which, did you know there are some 200 million animals (dogs, cats, rats, mice, guinea pigs, monkeys, chimps, apes, cows, pigs, sheep, and more) trapped in cages and used for experimentation? Pretty sick. We've got some evolving to do, folks.

Which means as well that we do not allow our cops to repeatedly dose people with 50,000 volts of electricity — “don't tense up now, or it'll only make it worse” — even criminals. Yes, I'm talking about the lawsuit brought by LeBeau Lagmay, and the Council's vote to approve $40k to hire outside lawyers to fight it. This is in addition to three deputy county attorneys also on the case. Mmmm, can you spell overkill? And wouldn't it be cheaper to just give that money to Lagmay?

Still, I can see why they're scared, because Lagmay is being represented by Dan Hempey, Greg Meyers and Myles Breiner – attorneys known for being passionate and pono, who don't file bogus claims.

I'm thinking the county's taking a strong stand for the same reason the cops and the prosecutor's office have been so vigorously fighting the right of Hawaiian nationals to carry a badge: they don't anyone challenging the absolute authority of the state. Never mind that there have been 513 Taser-related deaths involving a disproportionate number of persons of color in the U.S. since 2001.

What I'm wondering is what will happen to Eric Caspillo, the cop who wielded the Taser, if Lagmay prevails. If a citizen can get 20 months for assaulting a cop, shouldn't a cop go to jail for assaulting a citizen, and not just have the county pick up the bill for a civil payout?

The rain and sun are taking turns reigning over the day as I write this, and weather forecasters are predicting cloudy skies on the east side tonight. That means those of us who really want to see the
Gemini full moon total lunar eclipse — you can watch the process on this nifty video link sent by a reader — may have to head for the westside to catch the maximum coverage at 4:32 a.m. Who needs sleep when there's something way cool like this to observe?

Then tomorrow from 9 a.m. to noon there's the Surfrider Foundation's Tsunami Debris Mini-Conference at KCC, which you can also catch on live video stream. Thanks to Dr. Carl Berg for getting this together and to Dr. Robert Zelkovsky for the video stream.
Posted by Joan Conrow at 8:38 AM

I wonder if council will watch the video before they expend more other peoples (taxpayer) money?

Hard to see why you'd ever need to do more than one shot with the Taser. They were all down after the first one.

I am so gald Danʻs on this.
Been waiting for a good challenge to Taser.
But....they claim it is non-lethal. They claim no deaths can be attributed to Tasers directly. Hmm.

That cop needs some psych exam for sure; not fit apparently.

Relative to "Hawaiian nationals", which legally don't exist in the US, the state does indeed have absolute authority, as it should.

Cows are grazing on the DHHL land as you write.

Ah yes, "absolute authority." That "owenership society" Bush so proudly proclaimed. I own you. Master. Slave. Your life/death is in my hands. And who owns the state? We love control, don't we?

KPD needs to test for steroids!
That cop went from shrimp to monster, fast.

Our cops here a looking more and more like the ones portrayed in movies from seedy little towns down South in the Bayou.

I think every cop should get 3 doses of the Taser just to feel how "non lethal" it really is.

If the cops treat people (criminals or not) like cattle going to the slaughter house, would not you want to take a swing at one?

I know Eric Caspillo and he is not a violent or vengeful person. His ex-girlfriend probably asked him what he'd do if confronted by a drugged up Lagmay and Eric probably said something along the lines of "I'm not going to fight him. If he attacks me I'll just taser him." There are numerous nurses and doctors at Wilcox that will attest to the fact that Lagmay was totally out of control. You may be able to go there and talk to some of them also although they may not want to say anything pending the federal trial now underway. If a person is on drugs mace, tasers, and even bullets will not subdue them. Just look at the murder case of Jackie Koja. If you know someone who has done ice, ask them what they're capable of and they'll tell you that can do superhuman things.

Cops actually do get tasered while in training.

But Lagmay was not on ice douche bag