I'm not sure which was more dazzling — the sparkling, three-pointed diamond of Jupiter, Venus and the crescent moon that lit up the western sky last night as Mar smoldered on the other side of the heavens; the brilliant shimmer of the waves once the sun crawled up over the horizon this morning or the glistening rainbow that was creeping up the backside of a black mass atop waterfall-streaked Makaleha as I drove home.

I'm not sure which was more dismaying — Syngenta saying that its toxic GMO seed research “is Hawaii’s aloha to the world,” or Pioneer Hi-Bred claiming it's “concerned with bee-friendly practices” because “[s]praying and other routine management practices that could disturb bees is done at times when bees are less active” — ya mean like at night or in the rain? — and it plants “cover crops such as flowers and buckwheat as pollen sources to encourage bee survival” in fields that are otherwise drenched with pesticides.

Perhaps it was reading the much ballyhooed account of movie director James Cameron's journey to the deepest known spot on Earth — seven miles below the sea, in the Mariana Trench — only to discover that he, oops, introduced pollutants that pristine place in the process:

The only thing that went wrong was the hydraulics on the system to collect rocks and critters to bring them back to land. Just as he was about to collect his first sample, a leak in the hydraulic fluid sprayed into the water and he couldn't bring anything back.

Sweet. I wonder, could we hold off on “opening up this new frontier,” to use Cameron's words, until we've figured out how to a) clean up the messes we've already made and b) ensure we won't screw up the next place, like how we're introducing invasive species into the Arctic? I mean, come on. What, we haven't learned that lesson yet?

His next expedition is set for the second-deepest spot, which is Marianas Trench Marine National Monument, prompting the Fish and Wildlife Service yesterday to send out a press release noting:

While stipulating measures to minimize possible impacts, the permits allow the collection of scientific specimens and samples and the making video and audio recordings. For example, the DEEPSEA CHALLENGER must be rinsed with freshwater between dives to further reduce the unlikely possibility of introducing some microorganism from one dive site to another.

It was extremely dismaying to read that the county is considering building an amphitheater, pavilion and playground equipment at Kapaa Town Park, as well as relocating the neighborhood center and swimming pool there. [Correction: the pool and neighborhood center are proposed for the park that's by the round-about.]  Ummm, haven't you guys heard of rising sea levels? Why would you invest millions in public infrastructure at a park that's not only in the tsunami zone, but already suffering from coastal erosion of its parking lot?

As for the bike path, I was dismayed to discover it's now slated to be moved away from its planned route through the Foodland and Safeway shopping centers — so much for the path actually be useful for anything besides recreation— and back along the coast, to this pretty little unspoiled stretch of shoreline. 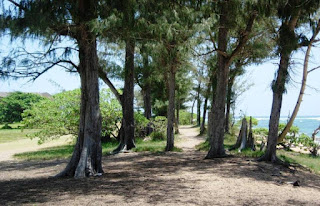 And though I was dismayed by yet another low voter turnout in the KIUC elections — perhaps it's time to review the voting process to see if it can changed to facilitate more partcipation — I wasn't dismayed by the results. In fact, it was downright heartening to see the two incumbents defeated and replaced with some new blood: Karen Baldwin, Calvin Murashige and Pat Gegen. We'll just have to wait and see whether that makes any difference.
Posted by Joan Conrow at 9:48 AM

I think you have the wrong park.
New Town is on the west side of Kapaa. Away from the shore line.

"to this pretty little unspoiled stretch of shoreline."
That pretty unspoild stretch is permited for a nice big hotel complex...

The graphic in the paper showed the park by the beach and called it new town park.

Sea levels are not rising...please tell the truth.....shoreline erosion is not proof...you should realize the shoreline in in constant change....nothing to do with ocean levels.

Sea levels are rising.......shoreline erosion has never occurred at this rate in my lifetime. Kailua, Waimanalo, Lanikai, Waikiki on Oahu, erosion of beaches is massive and shocking. Small islands in South Pacific already experiencing repercussions.

It's just a fluctuation. Kauai was meant to erode. Stop complaining and call me when the roads wash away.

The hydraulic leak may not have "introduced pollutants" in any meaningful sense. A wide range of oils will work in hydraulic systems. A lot of marine applications use biodegradable oils, usually vegetable oil based products, because leaks on a boat or ship so easily end up in the water.

NO pool or neighborhood center shown in the park.

Please confirm that you know the difference between shoreline erosion and sea levels.

I do, and we are experiencing both shoreline erosion and rising sea levels.

Sorry but you are wrong. I have lived near the beach for @40 years. I have had my house checked several times over the years because of Insurance policy requirements.The ocean level is the same year after year. I hope this helps you understand the situation.

And I hope this helps you understand the situation:

Sea level has risen in Hawai’i at approximately 1.5 mm/yr (0.6 in/decade) over the past century and probably longer. Though at first glance this may not seem like a substantial rate, long-term SLR over a century in duration exacerbates hazards such as chronic coastal erosion, impacts from seasonal high waves, coastal inundation due to storm surge and tsunami, and drainage problems due to the convergence of high tide and rainfall run-off.

Mahalo for clarification. I don't need scientific data to tell me what I have witnessed over my lifetime but the data confirms my observations.

Total nonsense..the sea level is not rising. I have proof...you have opinion. Perhaps you should consult with someone who sells flood insurance. Good luck...the World is not ending.

You must forgive Joan . She believes in Global Warming among many other myths.

Yeah, Joan and the scientists.

Joan and science, if you say so. However, she is correct on citing Dr Fletcher's studies. And your years of observation are you and your insurance company's business - you two can be the only ones buying (believing) it.

Kauai's Island Blackout was a demonstatrion by KIUC to show the people what they can do if you go against the smart meters and their decisions. EEEF them, Class action Lawsuit against KIUC will put this smart meter BS to an halt and end the Dictatorship of Bissel the Devil.

Are you funding the class action lawsuit? Money talks.

Ask the people living in the Atols if the sea is rising.

even if FOX news doesnot think so