The sea this morning was shimmering, sparkling, and the surf was big, really big — churning up the dirt from last winter's runoff that has been hidden beneath a thick layer of summer sand. 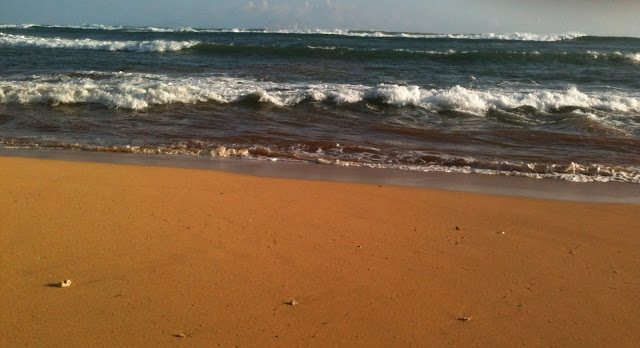 It's not unlike politics, which is why I can understand why so many people in Hawaii, especially on Kauai, where the system is so broken, don't vote. Who really does want to wade into that murky muck?

Still, as I picked up the stinking cigarette butt that a fisherman tossed upon the sand just before casting his line, and added it to the plastic drink covers, beer bottles, diapers and other crap I'd picked up on that beautiful beach, I thought, I am so tired of sharing the planet with unconscious, oblivious fucks. And if they're not voting, so much the better.

We don't need more people simply voting. We need more akamai voters. But the campaign literature that arrives unbidden in my mailbox doesn't even attempt to shine light on the issues. Like the full-color glossy flyer from the Democratic Party of Hawaii that has a photo of Lingle and Romney on one side, with the words, The national Republicans: WRONG for Hawaii. Shoots, they couldn't even back that up with one reason? In the same batch of mail was an eight-page faux magazine filled with promotional platitudes about Lingle that was sent out from an Illinois PAC.

So instead of blaming voters for being apathetic, jaded, cynical and disgusted, why not point the finger at politicians who fail to inspire and inform, much less serve the public?

Look, for example, at our own state legislative contingent: Tokioka, Kawakami, Morikawa, Kouchi. Not one of them responded to a Sierra Club inquiry about their position on the Public Land Development Corp. — the most controversial issue to face Hawaii in years. Why? Because they're all told what to think by the House Speaker and Senate President. Our so-called “leaders” are actually sheep.

Which is why there's a pervasive sense that no matter who you elect, the dysfunction, the cronyism, will prevail.

“It doesn't matter,” replied a friend, who follows politics and consistently votes, when I asked him who was going to win the prosecutor's race. He repeated that answer when I queried him about the County Council race, then told me those were the same answers that were given to him when he asked a friend the same questions.

Still, I'm a windmill tilter from way back, as is my friend, and his friend, which is why we all continue to cast our ballots, darkening the ovals alongside the few candidates worthy of a vote, and hoping, in our heart of hearts, that truth, justice and righteousness will prevail — for once, please god, maybe this time.

If you know what the issues are, and what the candidates truly stand for — as opposed to name recognition, ethnicity, party affiliation, familial connections, advertising jingles, etc. — then I urge you to vote, too.

Otherwise, do the thinking voters a favor and stay home.
Posted by Joan Conrow at 10:03 AM

TO: Sierra Club
RE: Your Endorsements

Haunani Apoliona was present and one of the board members that took part in the decision THAT THEY WILL NOT BE CALLING FOR REPEAL OF THE PLDC.

Did you really do your research on these candidates?

As well, VERY IMPORTANT, as you mention you have always received support from Haunani Apoliona with respect to cultural and archeological restoration on KAHOʻOLAWE, may I humbly remind you that there would NOT be anything to restore if Walter Ritte had NOT STOPPED THE BOMBING.

Aloha,
Leland Yadao, ʻRadarʻ
Candidate for the KAUAI seat of the Office of Hawaiian Affairs

Mahalo Leland for that reminder. OHA needs an overhaul. Same people year after year and no change. They too are Oahu-centric! Just like the other politicians. Once wrote a letter to Haunani regarding Alekoko and the emminent sale of it, received no response whatsoever and for years our Kauai rep has dropped out of sight. We need true activism not take care of only select groups of kanaka. My vote is for Ritte over Haunani.

That fisherman should be shame. Take from the resources but no malama the very place that feeds his ass. What kine is that. Neva learn to respect the 'aina nor his kupuna. Clueless.

Vote for leland Yadao for OHA along with Uncle Walter

Then the fisherman will harass someone from an environmental group for telling him what to do,

You got it right Joan.

Leaders should Inspire people. All Great leaders do.

We have a Deficiency of "bright and great"leadership. You don't have to be a genius to win an election and run the government. Just have big money backing you and your powerful friends. A legal Mafia

The "younger set don't vote" because they are Disgusted(!) by our leaders and politics.

Vampire love, the latest I Phone,Face Book, video games, and drugs are more fun and impactful.

You do an evil deed for the powers and you get rewarded handsomely, like a trip to the 9th Island with complete package of comps. Didn't think that we would find out now did you GOBAG. The third eye is in effect!


To Preserve and Protect Hawaii as we know it,
Please Vote:

And its a renunciation! Thank you for all of your hard work and bravery exposing a scary and powerful person. You are a real journalist.