Has anyone else noticed that the primary purpose of Huffington Post Hawaii seems to be encouraging people to move to the Islands?

I'm not talking about articles promoting travel to Hawaii — though Huff Po-HI has plenty of those — but pieces like “How to Escape from New York and Move to Hawaii” and “Here's How You Know It's About Time You Considered Moving to Hawaii.”

The latter is representative of the painfully banal approach that Huff Po-HI typically takes to relocating to Hawaii: your life sucks, the weather sucks, you're bored and then voila, “you Google image search pictures of Hawaii” — because of course you're not interested in substance, only superficiality — and whattaya know, you find all these gorgeous photos of the Islands on the Huff Po-HI website.

Why is the Huffington Post trying to dumb down and pimp Hawaii, turn it into a parody, reinforce all the worst stereotypes, misperceptions?

Like this blog post on “6 Reasons Hawaii Will Ruin Your Life,” which uses goofy photos to illustrate such statements as: “who needs a career path” and “work ethic? forget about it” and “Soon, you'll find that you have less in common with your friends and more in common with those drifters sitting on the sidewalk.”

I've brought that Aloha Spirit into my own life by using the pineapple as a welcoming symbol throughout my home. My dogs are named Maui and Tiki in honor of our love of Hawaii. I've also written a series about a young woman vacationing in Hawaii for the summer who meets the local heartthrob surfer. Along with discovering paradise, they find love set among the beauty of these tropical islands.
Auwe.
Sadly, this kind of distorted imagery is not a rare occurrence. In the three months since Huffington Post piggybacked on Civil Beat to launch a Hawaii edition, it's published precious little of substance and more than 30 pieces extolling the virtues of the Islands. They've included such puffery as adventure travel on Maui, surf cars, “glamping” (upscale camping) in the Islands, “lucky we live Hawaii,” and even a photo series on vog entitled “who knew air pollution could look this good?”

And if they don't have articles of their own, they'll run something from Forbes, or the New York Times. Main thing, just keep the message out there: come to Hawaii, and stay.

Though some are authored blog posts, many more run without any byline, raising the question: who is writing this palaver, and why? How come there's this drive to lure more people to Hawaii to live, when we don't exactly have an abundance of jobs or housing?

Like the post “Honey, Let's Move to Hawaii." Or “The Coolest Jobs In Hawaii Might Make You Reconsider Your Career Choice” — yes, you, too, could be a beloved helicopter pilot, a property manager for a lavish estate or even a farmer, so long as you don't grow GMOs.

Which leads us to the anti-GMO issue, the only topic, besides relocating, that Huff Po-HI has covered with a vengeance.

Do you suppose there's any connection between that emphasis, and the two-part, real estate agent-penned post on “Making the Dream of Living in Hawaii a Reality”? Or Civil Beat owner Pierre Omidiyar's plans to develop a super upscale resort and homes on Hanalei Ridge? (Which is the subject of a Star-Advertiser poll today.)

And keep in mind that this is the photo they used to illustrate a "farm" in those "cool career choices:" 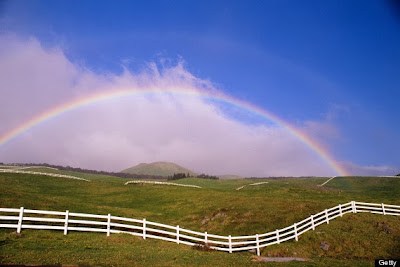 The last time Hawaii was the focus of a major push to encourage new residents was more than a century ago, when the plantation owners went shopping for cheap field labor.

So what do the fabulously wealthy Arianna Huffington and Pierre Omidiyar have in mind with their current campaign? What might they be seeking to gain from encouraging folks to pack up and move to Hawaii, where the newbies typically hunker down together and rarely assimilate? Is this an attempt to further dilute local culture, to create a block of voters who primarily value Hawaii for its climate and recreation, who have no ties to this place aside from the deed to their house?

Or is it simply the 21st Century expression of the same desire that drove the planters: accumulating money and power through the land?

As a friend observed: Whatever happened to that bumper sticker, nofogetfogohome?
Posted by Joan Conrow at 9:38 AM

Dis kine stuff......is always a scintillation and ploy for somebody making money.

Much like in the past....come to the southwest, see wild Indians, numerous animals to hunt and join the adventure. Land available for sale.

Well said and astute observations, Joan. I really donʻt like Huffington Post (yellow journalism) and Civil Beat has become a joke. Too bad because they launched with some writers that seemed to be ready to ʻdo the real diggingʻ.

Thank goodness we still have you.

I agree with everything you said, but...

I also know that you, and me, and a large population of Hawaii consists of people who moved to Hawaii from somewhere else.

Joan, can you write a reality column on moving to Kauai ?

While there is debate whether tourism or government or military is the #1 "industry" in Hawaii, Joan hits the nail on the head--it is the sale of real estate.

Joan, you will change your tune when they hire you to write for them...FOR FREE.

Huff Po are too stupid to know they are sending the wrong message, but Omidiyar don't give a shiot, he gets his prospects out of the arrangement.

remember that Huff and Puff is diluted glee groanng "journalism", trumped up self important Pierre Omidyar style to promote their way of making news to suit their outcomes. Huffington and Ebay boy have cash flow hubris meaning they are rich and can donate to a cause to substantiate their bait and switch protocal, then justify their actions due to their good guy posturing...
Don't believe a word of their intent.
Regurgitating random news stories

Omidiyar has the paypal records of everyone. Every one who bought pantys for his mistress, or STD medicine, or whatevas. Of course his projects gonna get approved.

"Please Ke Akua, we already have more than we can deal with tourae, transplants, or all their wealth and audacity, that continue to come up with ideas, destroying the coast line and many of places towards the Pico, once lovely island. example of craziness is sideways drilling Mauna Waialeale, Green Energy, now KIU scheduled to lease BLOOD QUANTUM specific DHHL Anahola and KPD substation that guess who has offered the Kauai County Council for free? WWWW and How is that possible? I encourage that you take a drive any day, weekends much more profound, Hanalei to Keʻe. Then, calculate that Keepitkauait FAILED, and finally, we have the likes of Robin Puanani Danner, who iʻve been very intrigued in research "how the hell"? I so am needing real live, lovely, educated in this genre, generating articles, as does Ms trisha watson-sproat, or eclectic or rabid writers. study and investigate and pull all the plugs you can find. There are just too many more questions than answers that my Kanaka as well as all other kanaka that ʻdo not share to president obama levelsʻ what WE want, only what the hand chosen few HAVE STAGED, anahola example recent Kumu Camp OR hows this, Obamaʻs sister doing a book signing as she visited this ʻKapuʻ restricted area belonging to none other than RD, Kualii, and now includes several suppor ts to flailing 501c3ʻs being offered ʻFINALLYʻ BY this apparently "I no scayed" power of her "policy and procedures", they placing themselves between the fed rock and a hard place just by obtaining that IRS letter that says NON PROFIT. check out www.kanakaforward.com...ALOHA"

Now they saying the locals love the tourists. lol

Love to beat them up, you mean, what no after dark disclosure?