It's a full moon Monday, a time for sharing a few things that caught my eye, or were sent my way, in recent days.

Let's start with this, from the Los Angeles Times: 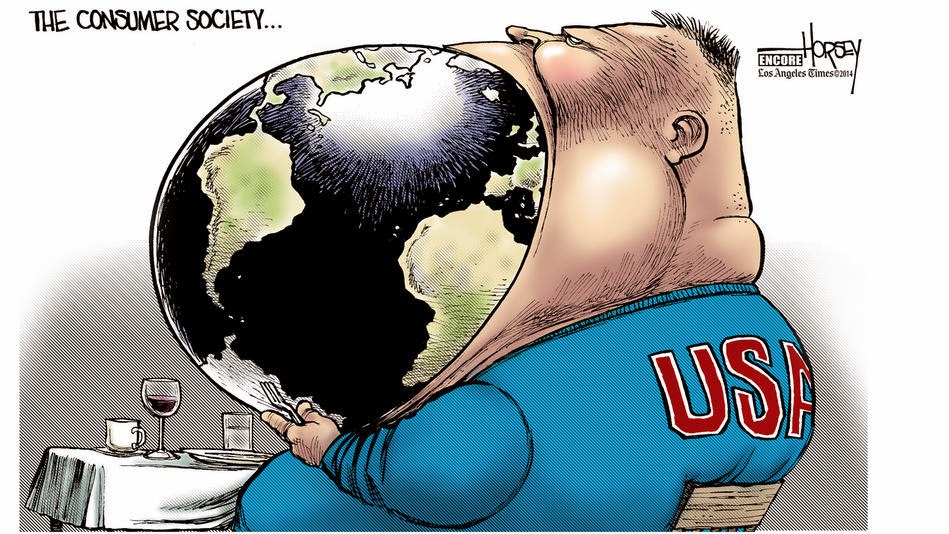 Meanwhile, Falko Partners has sold Kahuaina Plantation — 360 acres of ag land along the pristine, secluded coast at Waipake — to a buyer who wants to keep the land open and build just one house, or maybe nothing at all. It was listed for $67.5 million, but I'm not sure how much it finally sold for. Only that it did, and there will be no development of the 76 CPR lots — and thus no new beach access. The access was exacted as a condition of the subdivision, triggered once density exceeded six homes. But since the subdivision is being withdrawn, the access condition disappears.

Gee, if only the Council had approved the access when Falko first laid it on the table, it would've been a done deed, instead of a dead deal. But no, Councilmen Gary Hooser, Tim Bynum and Mason Chock, egged on by misinformed activists, wanted more, more, more. This is what happens, people, when you stupidly wrangle for something better, when you were already getting something great, and thus end up with nothing at all. 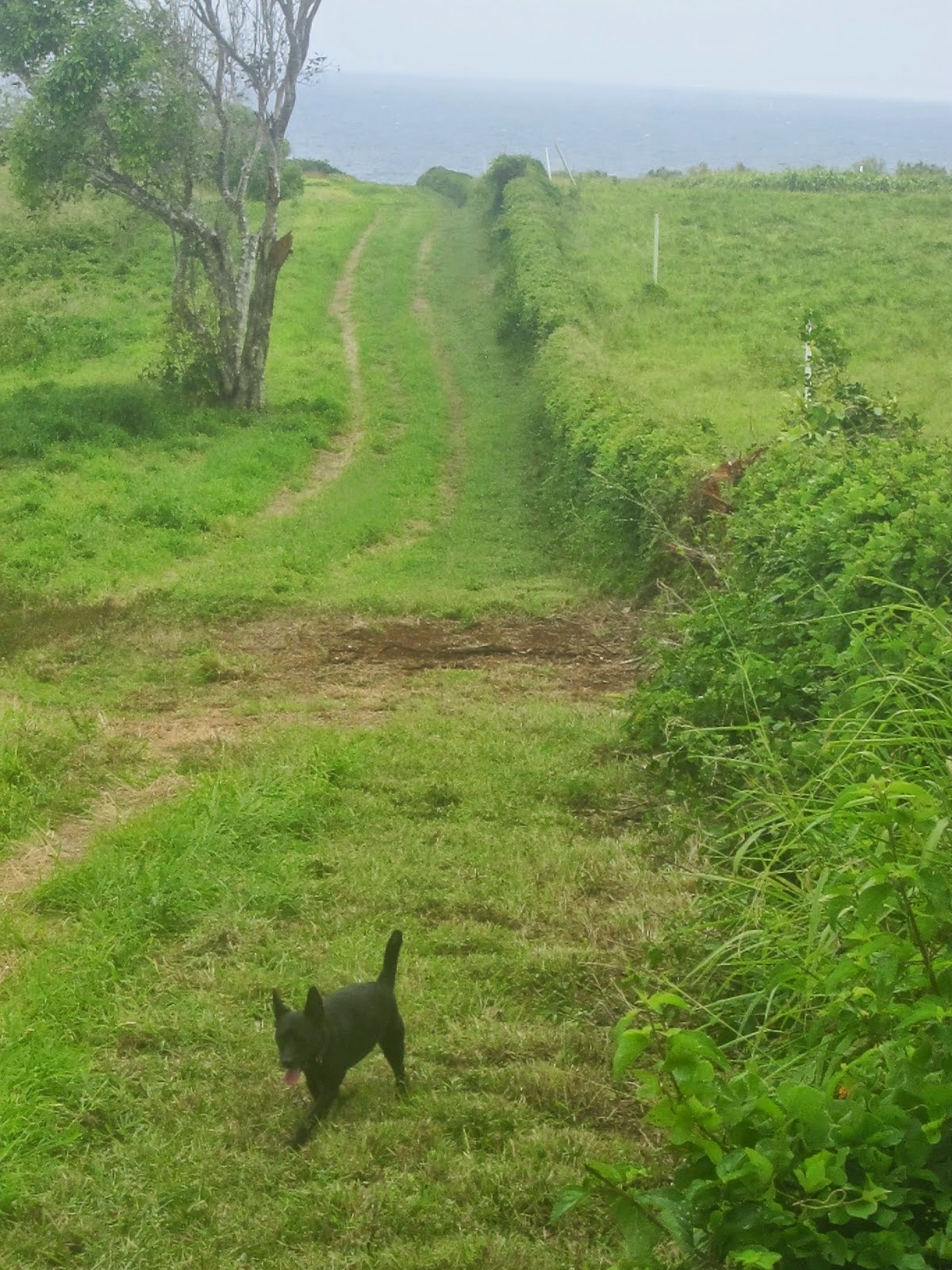 But hey, it's wonderful news for the area's monk seals, turtles, birds and other wildlife, who won't have to deal with the masses.

Speaking of which, cops aren't just getting armored tanks and automatic weapons from Homeland Security. As reported in The Guardian:

Local police have also received millions of dollars in grants for Stingray surveillance devices, the invasive and controversial spying tool that police have been using to secretly suck up cellphone data from entire neighborhoods – then covering it up.

And at least 10 schools in Texas are also stocking up on surplus military weaponry, ostensibly to respond to campus “shooter” incidents:

Continuing in the category of “dumb fuckin' ideas” — the subject line of an emailed link sent to me by a surfer — you'll find a plan by the Coco Palms' hucksters to also develop a 400-unit resort in West Oahu centered around a four-acre surfing wave pool. As the surfer noted:

Waves are energy and take a lot of energy to create.

Besides, who wants to come to Hawaii and surf in a pool?

Just when you thought it was safe to go back in the water: 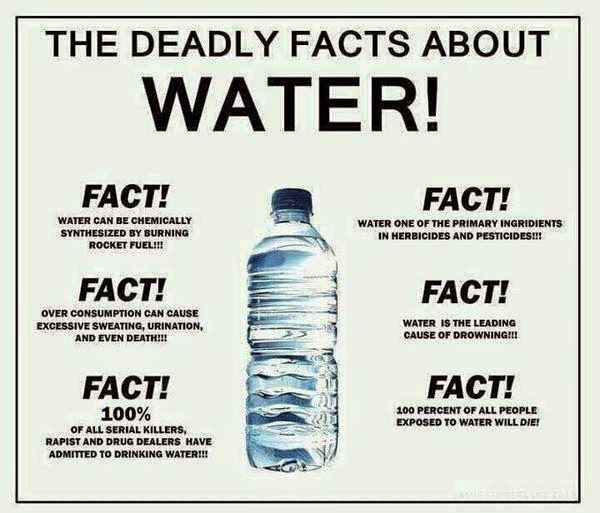 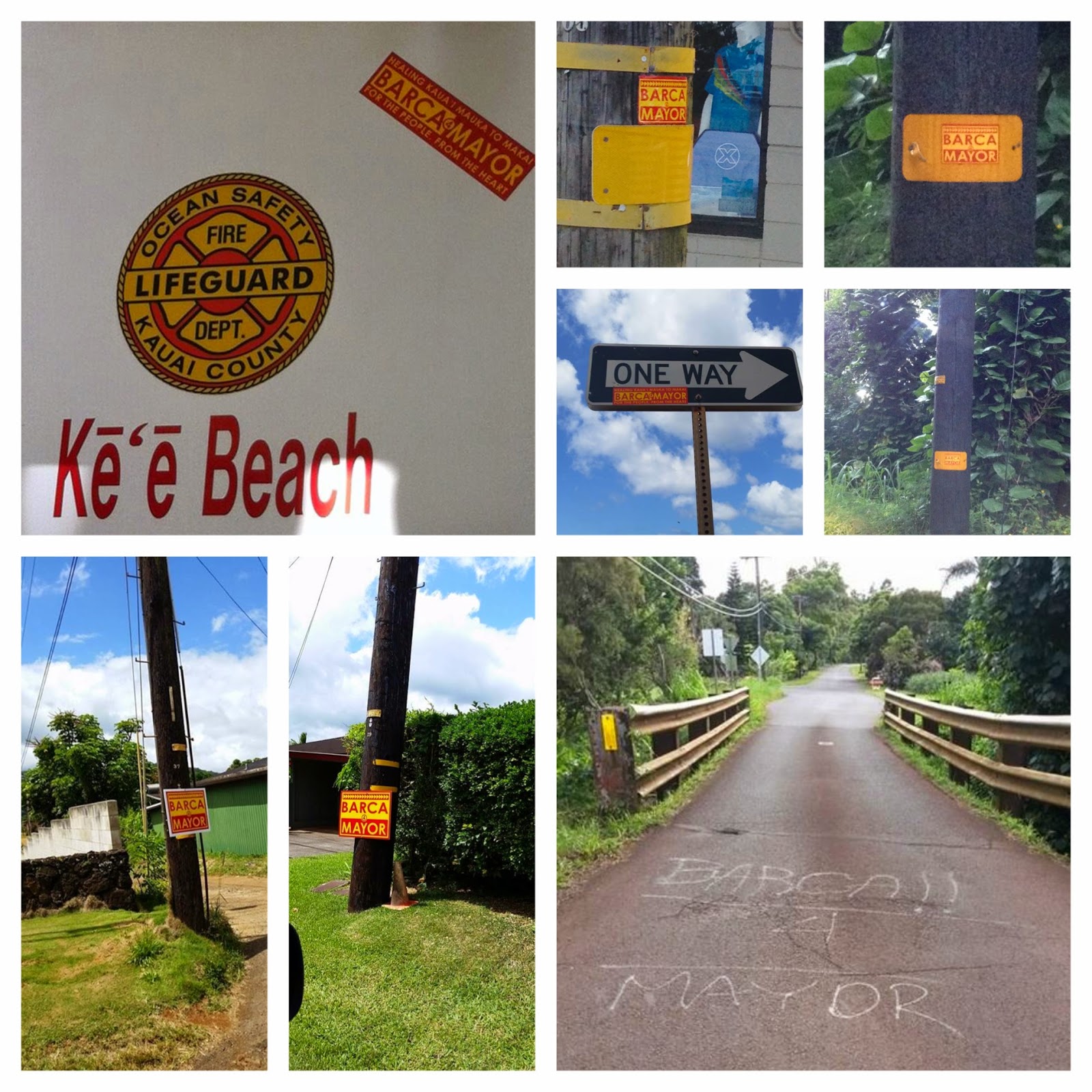 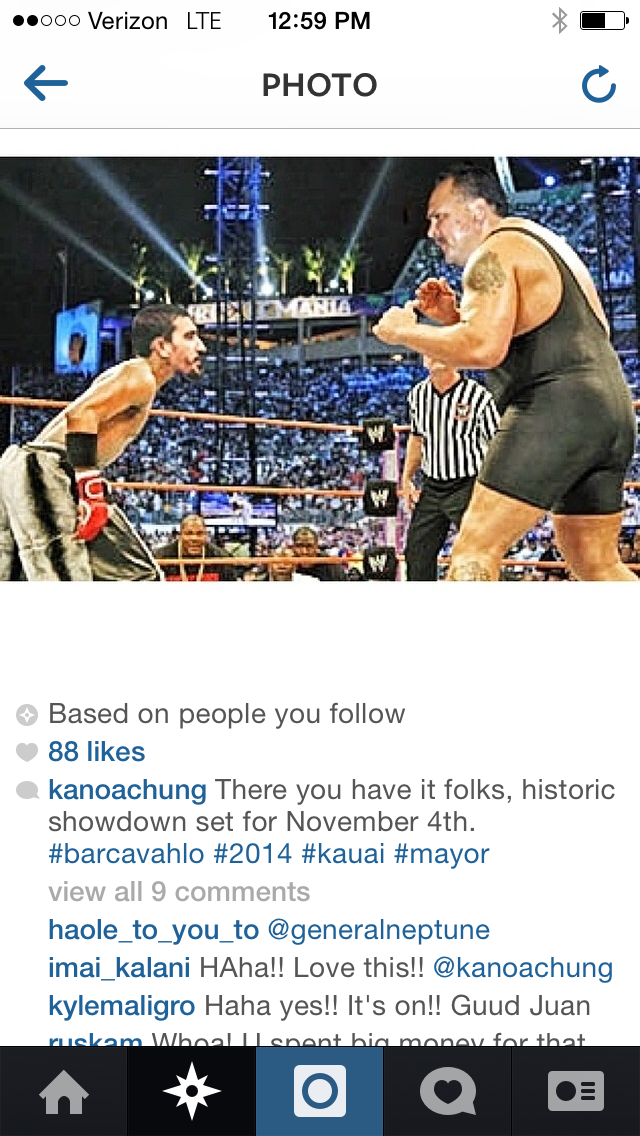 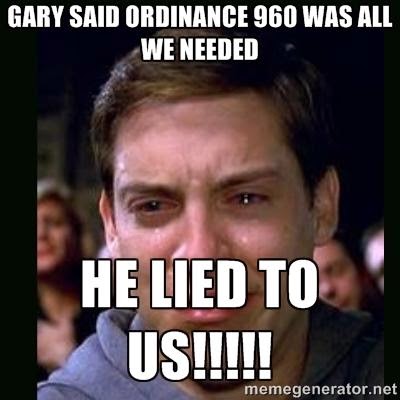 And finally, as a thoughtful counter to Facebook memes, bumper sticker philosophies and knee-jerk activism, check out Luke Evslin's most recent posting on his blog, Ka Wae.

What, the world isn't black-and-white?
Posted by Joan Conrow at 7:42 AM

Love the picture of Bernard and Dustin what a funny pic, still laughing.

Thank you, Joan. You be funny.
Thank you Gary, Tim and Mason for stopping beach access.

So no beach access because some wanted the alaloa too. Pathetic that the council listened to them for so long and allowed the proposed access to be used for other agendas and then we get none. The council allows itself to be distracted from facts far too often.

Joan, correction, they did not get automatic pistols, they got semi-automatic pistols. And the rifles they got are the same ones you can buy in just about any gun store. Don't you want the police to at least have the same firepower as the potential bad guys?

The list of bad decisions made by Bynum, Hooser, and Chock goes on and on. Wake up locals these clowns are more toxic than pesticides. Vote them out along with Yukimura and Furfaro. Yukimura is way out of touch with the locals, Furfaro is just sick, health wise, what is he thinking? He sure ain't leading.

So I was at the HA coffee shop on RIce Street and I over heard Gary Hooser talking really bad about people who work in the county. I was shocked because he was speaking loud enough for people around him to hear and it just made him look really disrespectful and unprofessional. Shame on you Gary!

I also heard his buddy Tim Bynum threw a pencil at Joanne Yukimura during a council session. I didnt believe it so I looked it up on the council page via the county website and saw for myself. Its true! I also heard he is verbally abusive to other women he works with.

Really? These are our council members? Pretty bad examples on a very basic level if you ask me. Lost my vote for sure.

Who both the Waipake land?

It's sad to see Dustin's supporters defacing the island and spray painting roads. Very immature and it turns people against him.

The World may not be black & white However the leash law is easy to understand.....why do you show pictures of dogs not on a leash.....are you exempt from such laws ?

The leash law isn't applicable on private property, and that's where I was.

I hear there is a movement, much like the march on rice street, to get Hooser, Bynum, Yukimura, Furfaro and Chock out. Some pretty heavy hitters are involved because they are sick and tired of this circus. Only this time, the movement will be made up of the silent majority, and not the loud and obnoxious minority. You can already see the back pedaling by these council members and it's pretty funny to watch. We will soon see how successful they are.

and pathetic Joann in the paper today saying she wants to appeal cause that way they will know if an ephis is allowed. What a blabbering ... first she says we need to pass the law in general to see if it is a legal thing to do, and when we lost and she says then she wants to appeal just to see if an EPHIS is allowed.Seems nonsensical, why doesn't the council make a donation to the DOH and DOA to do a study(no one in their right mind would engage citizen experts to do the study anyway) and stop with the lawsuits to see if something is legal or not. She needed to have a judge tell her after spending hundreds of thousands of your tax dollars because she refused to listen to the county attorneys opinion. Since it is election time, she still panders to the GMOfree crowd. Got news for you Jo, they don't so much support you. Lucky for you, others do, but we don't expect you to continue this charade. All this wasted time and money and the people on the west side are no where closer to being exposed to less poison.Is the political arena as sick as the people on the west side , or sicker?

Can you rearrange the post and put the MMA pic of Bernie and Dusty first?

Richard Spacer sent out an email that reads:

Blogger Joan Conrow continues her attack on us, calling us misguided.

Securing ala loa is state law, not an option. It is our legal right. Conrow never mentions that point.

Mauka-makai access was a subdivision requirement of county regs. Losing it is a mis-nomer. A separate county rule says beach access every 1500 feet irregardless of if there is a subdivision or not.

Losing a proposed access that forbade bikes, planned for no restrooms, 5000 foot walk with no water, etc., is not end of world. As said, access can still be pursued by the 1500 foot rule.

Just keep spinning it, Richard. It's a loss to the public (though a gain for wildlife) and you know it. And while you're at, go check county law. There is no way they can require an access from the new landowner.

Have you seen the Sea Grant study on the impacts of climate change to Hawaii? Ironic that an industry contributing to the record levels of greenhouse gas will be wiped out by climate change.

"She needed to have a judge tell her after spending hundreds of thousands of your tax dollars because she refused to listen to the county attorneys opinion."

Same thing that had happen in Bynum case.... if they just listened to the County Attorney from the beginning.... instead had to have a judge spell it out after spending all the money.

Another one bites the dust. Coulda Woulda and Shoulda that sit at the Council table should have not been so greedy; they could have accepted the gift offered; and more of Kauai would have been accessible. No real difference though, wild life has to live and there's already enough (really too much) access at Lepeuli.

Spacer...what a joker. Cant just lay down access wherever people like you want to. Has to be a 'trigger' that causes this action, not simply a measuring point of so many feet. And as long as we're chatting, "ala loa" is not a state law, it's a state option. But let's be clear...an old bulldozed agricultural road...is not an "ala loa".

What would we do without all these clowns working this circus? Hopefully we'll find out November 4th.