The Kauai County Council will take up the topic of cesspools today, when it considers a resolution to support a low-interest loan program to help residents convert to septic systems.

Proposed by outgoing Chair Jay Furfaro, the resolution calls for funding a 20-year loan program with $10 million in bonds. The program would serve people who meet income restrictions, and are buying or selling houses within 200 feet of a perennial stream, river, ocean, or shoreline, or a two-year groundwater travel time to the intake of a public drinking water well.

Quite a few properties would qualify. Kauai has some 14,000 cesspools, and 11,600 of them are located in perennial watersheds, discharging approximately 8.1 million gallons of effluent, 1,800 kilograms of nitrogen and 520 kg of phosphorus into the environment daily, according to the resolution. Ugh.

The resolution was driven by the state Health Department's proposed rule changes, which would prohibit new cesspools — Kauai has wisely already done this — and require houses with cesspools to convert to septic systems within 180 days of sale.

The conversion cost is estimated at $15,000 to $20,000, according to the resolution, “which may be cost prohibitive for a majority of residents on Kauai who would like to own or sell a home on Kauai. It goes on to claim that mandated conversions will cause “extreme financial hardship” for the community.

No doubt that's true for some, and low-cost loans seem reasonable to help them.

But in the meantime, what can be done to hurry along those who most certainly can afford it, and whose properties are located right on the ocean? Like the numerous vacation rentals in Haena and Hanalei, which Jay curiously never mentions in his resolution, though he does reference homes in Wailua-Kapaa, Nawiliwili and the area from Poipu-Hanapepe. 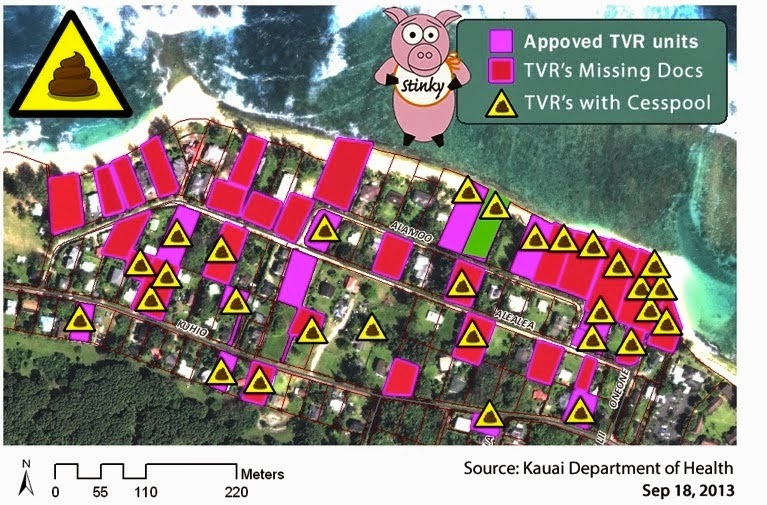 One blatant example is the $3.987 million Bali Hai Dream House, which is owned by the Paskal (tour boats and Postcards restaurant) Trust and located right on Makua (Tunnels).

Though records show the house was significantly upgraded in 1996, it's still using the same small cesspool that was dug back in 1970 for the original little house. Only now it has three bathrooms, and sleeps six-to-eight. With a weekly rent of $9,500, it could quickly cover the cost of a conversion.

And then there's the Teak House, an $8 million, eight-bedroom, 6,026-square-foot vacation rental that was built atop burials by the Zimmerman family — which, btw, funds the local anti-GMO movement. This TVR has 8 full baths, one half-bath and a pool, all served by a small cesspool built in 1989.

Come on! This is totally unacceptable for high-value, high-use TVRs right on the ocean. Sadly, these properties are but two of many. It's time for the county to require conversion to septic as a condition of renewing TVR permits.

The last time I wrote about the proposed cesspool rules, I got a comment from Kauai Principal Broker F. Lee Morey, who wrote:

What is true is that what is proposed by the Dept. of Health, which is point of sale replacement is not a good idea. We average 150 sales per year that have cesspools. This info is taken from MLS records. There are approximately 14,000 cesspools on Kauai. That equates to 93 years if all cesspool properties were to be sold and changed. Then throw into that equation the problems that point of sale will create with lenders, lower end and older homes. Primarily hurting those that can least afford it. We want cesspools gone. We just believe there is a better way to do it than point of sale.

What I personally would like to see, as a Realtor, is a 10 year deadline to get rid of all cesspools. First focusing on the most critical areas that have been identified. I would like to see no interest or low interest loans so that the replacement can take place prior to a sale and not create withholding issues for lenders. The cost of replacement is $20,000 to $30,000 per property. The smaller lots, under 10,000 sq. ft., must use a system that fits down into the cesspool that now costs $30,000. You can see how that may be cost prohibitive for some families. There should also be tax credits just like solar.

Last but not least there has to be enforcement. I think that the Dept. of Health feels it will be easy to monitor at point of sale. Though monitoring may be easier 1) It will not get the job done in a timely manner and 2) we need to offer some assistance for those that were complying with the law when they built their homes and not penalize those that can least afford it.

The Garden Island has written extensively about Mahaulepu stream contamination, which can apparently be attributed to nene, chickens and wild pigs (what a surprise), and the North Shore coral disease. But it's been totally mum about the impact of TVR cesspools on water quality, perhaps because neither Surfrider nor the Terry Lilley fan club have an ax to grind there.

Regardless of what the DOH decides, Kauai County can take its own path toward cleaner water by helping locals with low-cost loans and demanding septic conversions for TVRs near the ocean and streams. As for tax credits, they should be limited to the least expensive properties, not issued across the board.
Posted by Joan Conrow at 8:25 AM

But there aren't any corporations to rally against, people we can call baby killers, so this won't get much traction. Real environmental issue on Kauai are ignored because no mainland organization is providing talking points and memes to share here. And "replace cesspools" just isn't going to get Graham Nash or Makana as anti-something concert headliners.

The map depicting the abundance of cesspools in Haena is disgusting. Houses like the teak house and Paskal house demonstrate the need for conversion to septic tanks. How massive oceanfront multimillion dollar vacation rentals are able to exist with their same old cesspool is ludicrous. 8 bathrooms and you're on a cesspool? ON the ocean?? What is the impact to the beautiful beaches and reefs of places like Haena??

Who is going to pay for the cpool when it is inaccessible in the back yard of the middle class family who just inherited it from the parents that passed. New comers from the east or west! Putting more obstacles in the way of local kids trying to stay here.
Does an inheriting a house count as a sell requiring an upgrade?

Let everyone who wants a cleaner environment participate. A sales tax increase on TP would be a good start!

God forbid you read the bill yourself before pitching your hissyfit.

"God forbid you read the bill yourself before pitching your hissyfit."

Especially when it's not a bill.

As someone who owns a self-built (literally) family home in Anahola,with a cesspool, and is across the street from the beach, I would welcome inclusion in a program to do what is right to protect the aina. Cesspools were ok before, because we didn't know any better and that's what was allowed for by law/ permit. Now we know better - as Dr. Maya Angelou would say, and we should DO better.
I, too, would need a loan, but would gladly participate in the personal expense for the greater good even though we are not selling and probably never will sell.
Pat Hunter-Williams

Aloha! I represent a local company (Bluewater Pacific) that sells and installs advanced treatment systems(Bluewater ATU) that are far better than cesspools and traditional septic systems. We're a local company looking to get the word out on upgrading cesspools to much more effective technology. Our systems allow for the reuse of "waste"water for irrigation of landscaping if desired. Here in Hawaii, cesspools are causing problems on all islands and it's nice to see some people taking the issue as seriously as we all should. We offer consulting, design, and install services. We'd be happy to answer any questions you might have.
For more info you can check out our basic website at www.bluewaterpacific.net, email me at jlawrence@bluewaterpacific.net, or give me a call at 808-383-9758.

Aloha again, this is Josh with Bluewater. I forgot to mention that we also can provide financing for these systems and they are comparable in price (perhaps a few thousand more) to traditional septic systems. We'd like to see this problem in Hawaii solved as it affects us all.