New Delhi is a cacophony of sounds — especially horns — and color.

The horns honk continuously and seemingly without any effect, as cars, bicyclists, trucks, scooters and motorcycles jockey for position in a rapidly-moving stream of traffic that regularly oozes out of its allotted lanes.

But no diesel smoke or exhaust fumes hang heavy in the air, because much of the motor vehicle fleet has converted to compressed natural gas that the country produces itself.

The color is found in the bright clothing that women seem to favor, and in the flowers that are still blooming riotously, thanks to a cool, wet winter, in parks, college campuses, open spaces and countless trees. It's one of the world's few major metropolitan areas that has seen an increase in green space even as the city has grown.

In contrast to its lush greenery, New Delhi takes security seriously. The hotel has a round-the-clock guard and metal detector, and all bags and purses must be screened before they can be carried in. We also passed through a detector when we entered a side street biza
bizaar, though from its rough design, I wasn't sure it was too effective.

Other observations: there are far more men than women on the streets, though women and men can be found in roughly equal proportions at institutions of higher learning. And men and women alike dress modestly. Though the weather was as warm as a summer day in Hawaii, no one was wearing shorts or tank tops or mini skirts or skimpy little camisoles. I saw no bare shoulders or legs (save for the calves of a man sleeping on a sidewalk), no yoga pants, no bra straps, no hip huggers, no skin tight jeans.

But I did see a waxing crescent moon sidle up to Venus in the orange glow of the western sunset sky.

I also saw genetically engineered dahlias that were bigger and bolder than any I'd seen before, though they were already a few days past their prime, and rice plants that were being engineered to withstand drought and salinity, while also increasing yield and removing heavy metals from the soil. 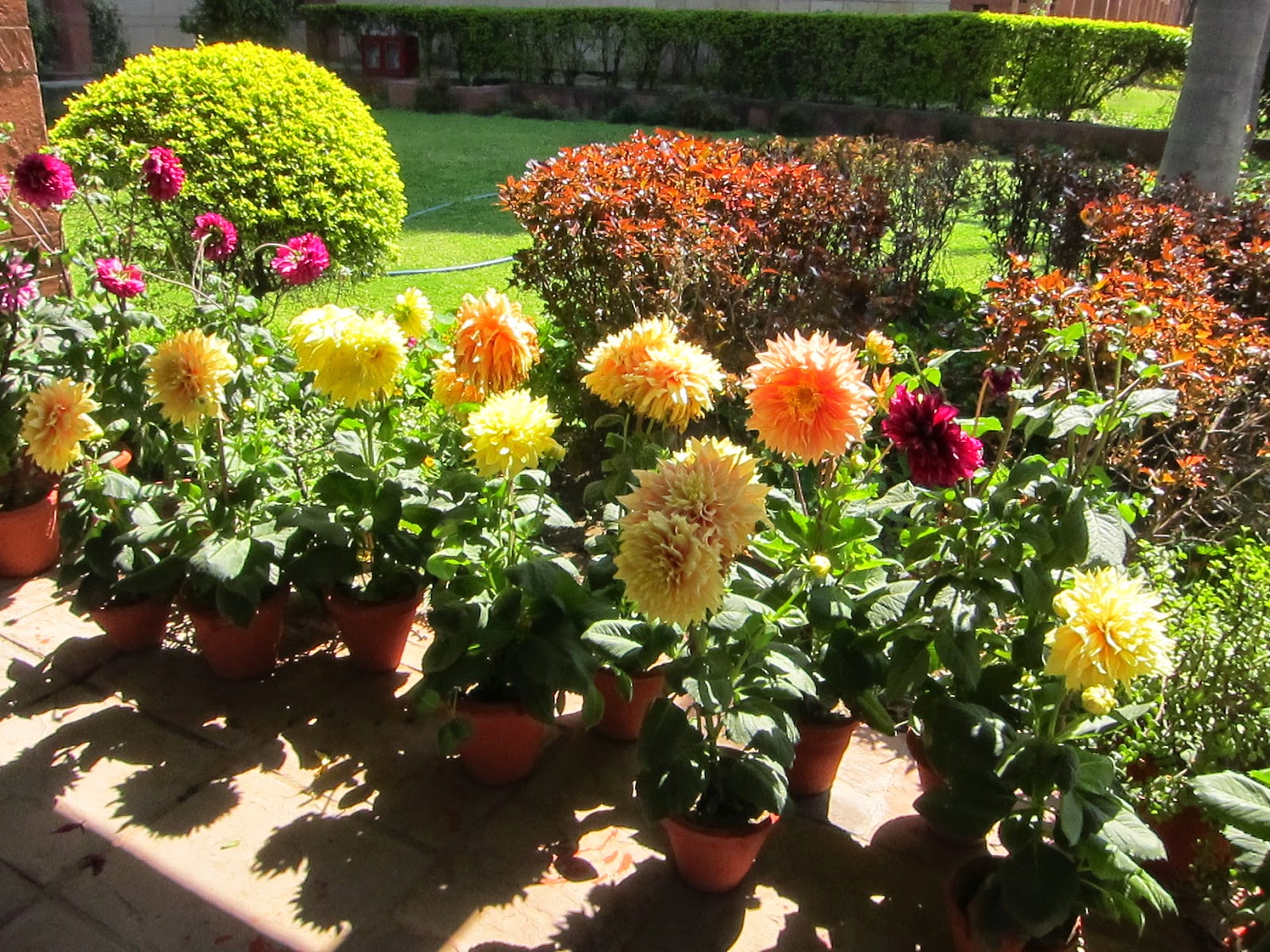 The rice plants were growing in green houses at research facilities. The most promising strains were about to be field-tested in neighboring Bangladesh because India currently does not allow its scientists to conduct the crucial step that allows plants to move from a science experiment to a viable commercial crop.

That policy is purely political, and word is that it's about to be reversed. But in the meantime, scientists are pursing field trials in biotech-friendly Bangladesh, where farmers are already growing Bt cotton and brinjal (eggplant). Brinjal, a traditional Indian food staple, is typically sprayed with insecticides every other day to stave off the destructive effects of various burrowing bugs. Bt brinjal, on the other hand, doesn't require such spraying because a gene of Bacillus thurengiensis, a soil bacterium used in organic farm pest control, has been engineered into the plants to ward off insects.

I asked Ashwani Pareek, a plant scientist at Jawaharlal Nehru University, if he thought genetically engineered plants represented any danger. "No," he replied. "I work with them all the time, so I understand the science and know they are not harmful."

"So why is there resistance to their cultivation?" I queried.

“I think it's just ignorance,” he replied. “People don't understand what we're doing, or how the process works.”


As he showed me some of his research in isolating an enzyme that a plant uses to kill an insect, similar to a venus fly trap, in order to obtain the nitrogen that it needs, it struck me that this is another method for understanding nature a little bit better, and that doesn't seem to me a bad thing.

And I couldn't help but recall Michael Pollan's book, "Botany of Desire," and wonder whether this was another way that plants were getting us to do their bidding and spread their genes. 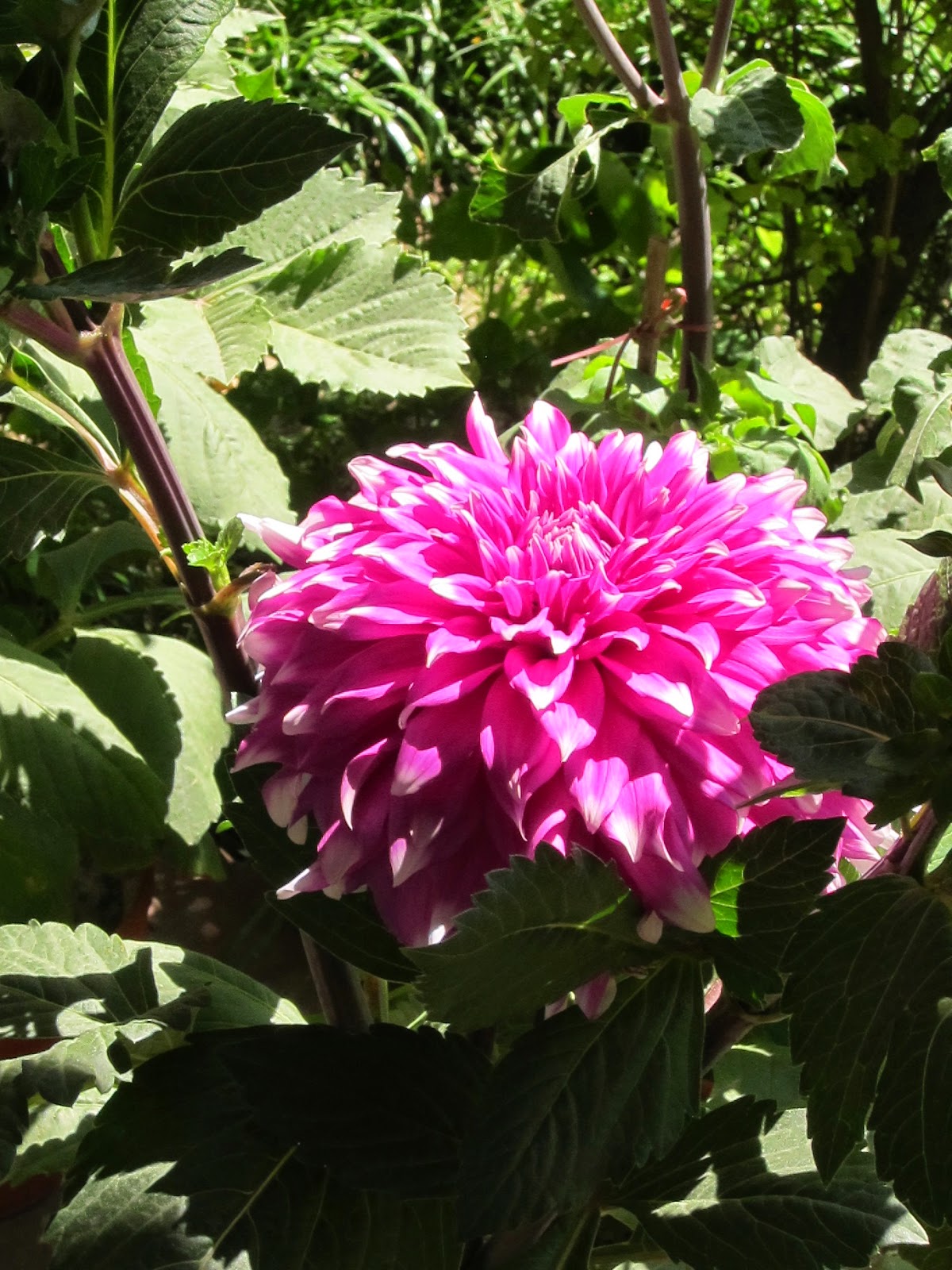 brilliant Dalia's and flowers, thanks for sharing

Love this! It's great to get an intelligent perspective. Thank you Joan!

I ran into a fascinating lecture by Ronald Herring, a member of Cornell's Government Department, whose specialty is South Asian agrarian politics and reform. It's long but clear, and it helped me understand the 2491 fiasco and some of the organizations and personalities behind it promoting anti-science and hysteria in place of reasoned discussion. I doubt that there are many better informed people than Herring on the science and social science of the GMO divide : https://www.youtube.com/watch?v=RxpypapQeDk It looks hopeful that India may not return to the medieval agriculture espoused by that peripatetic and dissembling Delhi faker, Vandana Shiva. Have a great and informative trip.

The only way a rice plant is going to remove heavy metals from the soil is by pulling it up into itself. Do you really want to eat rice from a plant designed to pull poisons out of the ground?

So now you have a plant full of lead, cadmium, mercury, arsenic and lead. Where do you dispose of it?

First, in India and elsewhere people are already growing and eating vegetables in soil with high levels of heavy metals, which means they are continually exposed to the metals, but the soil is never cleaned. It's a major worldwide problem.

As I understand it, plants designed to remediate soil accumulate the metal in non-edible parts of the plant, such as the leaves in rice. These can be burnt to recover the metals or disposed of in other ways.

The alternative is to just leave the soil contaminated, where it continues to be taken up into the food crop and eaten and/or migrates into the ground water.

Joan - Thank you so much for this forum. It rules!

@3:51 PM, try reading and posting a balanced suite of articles on pesticides and herbicides, get yourself a scientific education, and then present a VIABLE alternative.

Talk to you in a million years...

"The issues surrounding G.M.O.s — genetically modified organisms — have never been simple. They became more complicated last week when the International Agency for Research on Cancer declared that glyphosate, the active ingredient in the widely used herbicide Roundup, probably causes cancer in humans. Two insecticides, malathion and diazinon, were also classified as “probable” carcinogens by the agency, a respected arm of the World Health Organization."

@11:05, the IARC Monograph is a joke and has already been widely criticized (by actual credible scientists). For one, they cited the infamous 2012 Seralini "lumpy rat" study. Epic fail.

Try again, this time not using something from a non-informed journalist or a biased activist website.

The International Agency for Research on Cancer is "a joke"?

The New York Times is a biased activist website?

Try going to other sources on this, like Academic Review, Science 2.0, Genetic Literacy Project, etc.

So those sites will assure me that Roundup does not "probably cause cancer?"

Well @9:19 AM, if you actually "try reading and posting a balanced suite of articles on pesticides and herbicides, get yourself a scientific education" and then review the literature you will know a hell of a lot more now than you are demonstrating.

But I'm not holding my breath that you'll actually do any of those things.

@9:51
In 2011, the IARC listed cell phones as a cause for cancer in order to destroy their credibility I suppose. Next week it will be your tin foil hat!