Musings: I Spy with My Little Eye

I spy a homeless guy, holding a sign that reads: Looking for investment capital.

Hmmm. As in beg enough to buy an eight-ball of junk/ice/coke and split it up for smaller sales? No, thanks.

I spy an article in Beach Grit about Dustin Barca, Lucifer and guns — a creepy combo, to be sure. 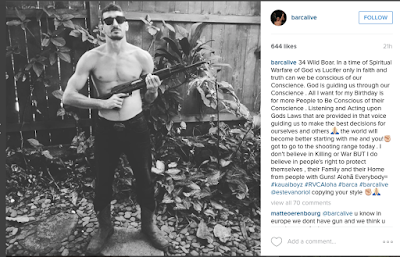 I may not love all his rhetoric, but I’m on board with most of his goals. I believe he truly cares, that his activism springs from a place of selfless regard for his fellow man.

I have no idea what Dustin's goals really are — other than to promote Dustin. And it's pretty much impossible for a full-blown narcissist to have selfless regard for anyone. Still, I do believe that Dustin truly does care, as do many of his followers.

Problem is, their activism is so often grounded in entrenched ignorance, smug self-righteousness, short-term thinking and an inability to see the big picture that it becomes a caricature.

As I've said before, it doesn't matter if your heart is in the right place if you're talking out of your ass.

And in the case of Dustin and others, it's exacerbated by the aforementioned narcissism, pathological levels of grandiosity and a messianic complex.

Those 644 “likes” may think they're being cool, and getting down with Dustin, but they're just pushing him closer to the edge. It's harmful, not helpful, to feed a person's delusions, especially when they're teetering on the brink of sanity.

Also on Beach Grit, I spy a video of dumb asses — apparently filmed (by Terry Lilley) because they're young shapely asses — frolicking in killer shorebreak at Lumahai, even as the jet ski rescues a guy who got washed out.

And they wonder why so many people drown. Truly, there's no regulating stupid.

I spy yet another crybaby going to The Garden Island — waa, I was in Mahaulepu after the gate closed and I had to pay the fine, waa — and getting a write up followed by the usual crybaby entitlement comments — “I never understood why Grove Farm installed the gate.  How many yeas [sic] did we all use that road. It was fine when they were growing sugar and had no choice but to leave it open. Trash or parties on the beach is no excuse. If it's in need of cleaning make the state or county come clean it up." — that show no grasp of reality.

Yeah, a lot of things were fine when they growing sugar, but in case you hadn't noticed, it's a different world now. If the gate was open all night, that place would be tweaker central and a homeless haven. And how, pray tell, is a private landowner going to “make the state or county come clean it up”?

I spy Councilman Gary Hooser — a narcissist on the order of Barca — once again doing the wild spin, using his fourth-grade writing skills to present his lobbyist registration bill as a boon for Kauai even as he uses his own piddling little office to lobby for HAPA.

And — get this — blasting Jan TenBruggencate for "significantly misrepresenting both the facts and the intent" of the lobbying bill. Yup, that bit of projection is coming from Gary, the master of misrepresentation and mischaracterization.

Then Gary, proving he's also mastered the art of hypocrisy, goes on to pontificate:

It is the “after hours” lobbying, the lunches, the dinners, the trips, the first-class travel upgrades and the one-on-one meetings behind closed doors that are for the most part invisible to the public eye that deserve full transparency.

Yeah, so why are you hiding the funding sources for HAPA, Gary? Why are you running a candidate training program with similarly undisclosed funds? Why don't you disclose how HAPA, Center for Food Safety and Earthjustice co-mingle monies to make it seem like these groups have more clout than they do? Why won't you reveal who paid for your trip to Switzerland?

Come on, Gary. Go ahead and model that full transparency. Lead by example, instead of ignorance and fear-mongering. I dare you.

I spy a Civil Beat editorial promoting a citizen's initiative bill. Which is great, in concept. But seriously suspect when it's introduced by anti-GMO legislators like Sen. Ruderman and Thielen. And fucking dangerous you have people like Hooser and Barca and their cult-like followers eager to manipulate the political process for their own narrow, perverse ends.
Posted by Joan Conrow at 10:45 AM

Barca was laughable, now he merits guarded sympathy. Mentally ill people often do not recognize their derangement. I believe he is one of them, as his political/religious rhetoric mimics many of the rants I heard when interacting with paranoid schizophrenics in a past job. The hallmarks are all there--grandiosity, paranoia, hell and damnation. I truly believe he needs help. His supporters are doing him no favors. It is really sad.

Joan do you favor the bill or not, and if not why not -- other than the face that Hooser introduced it?

11:38 -- Actually, what Gary just did with his piece in The Garden Island, and what he does with his blog, would be considered lobbying under this bill, except he exempts Councilmembers -- even ones like him, who run political advocacy groups masquerading as nonprofits:

Gary also includes this bogus exemption, which would allow him to call in attorneys from Earthjstice, or people like Ashley Lukens, even though she's a registered lobbyist:

12:19 - So would you recommend removing the exemptions you mention and then would it be a bill worth supporting?

Wow this guy has to be an idiot... He still believes there is a god.

11:38 "political advocacy groups masquerading as nonprofits." Is this just your opinion or are they breaking the law? I heard Gary say he was speaking for himself and not as a county council member is Switzerland, but mentioned the county council after the disclaimer? Do you think this he broke any laws?

Yeah, I think they're breaking the law.

Joan are you aware the two provisions you object to are standard items included in almost every lobbyist regulation law in Hawaii and in other States?

I am the truth that there is a God and a son of God named Jesus Christ.

If you don't believe then it's your choice but don't try to ridicule people who have faith.

This is my 17th year playing kauai senior softball. In all the years, this is the first time that Hooser showed up at our opening ceremony. He was met with very lukewarm response after all that he has done against the westside interests with his BS. He is running scared because of his misdeeds within the last three years as a councilman. He's a pilau politician who should be held accountable for all his actions.

Joan, if you think they are breaking the law do you have any idea why they not being prosecuted?

@9:02 -- The number of IRS investigators has been cut and I imagine they're going after people who will generate money in the form of unpaid taxes/penalties, as opposed to groups that would simply lose their nonprofit status.

The safety on AKs and AK variants is the lever on the receiver, not the magazine release in front of the trigger guard. DB may or may not be a dumbshit, but if you are gonna call someone out, I think you should know what you are talking about, especially if you're gonna resort to name calling, asterisk, or no. That weapon is on safe.

To John T., AMEN
The lever of the AK 47 seems to be on the safety. Just like John T. said, the safety lever is above the trigger.
But it doesn't matter whether it's on safety or live, because the hilarious thing about the comment from Anonymous 10:10 is that the AK 47 Dustin Barca is holding HAS NO MAGAZINE ATTACHED. Ha ha ha ha ha.
Removing the magazine disables the rifle. What a dumb ass comment from Anonymous 10:10. What a dumb ass. NO MAGAZINE!!! YOU HEARD IT? NO MAGAZINE!!! DUMB ASS!!!

Wow bra he look like Rambo. Must be the shades. Epic......Too funny

Magazine or no magazine, safety or no safety, you ALWAYS treat a gun as if its loaded and ready to fire. How do you know there isn't a forgotten round left chambered? You never put your finger on a trigger until you are on target and ready to fire. Gun safety 101 PERIOD!!!!!

I can show you thousands of pictures of soldiers, police, hunters, sport shooters, professional and amateurs all posing with their weapon of choice with their trigger finger outside the trigger guard.

That pic only shows DB is unsafe around any gun because he doesn't know basic gun safety. Maybe the next gun he picks up and poses with will be an old style rifle that isn't disabled when the magazine is out.

And I apologize for misinterpreting the lever in front of the trigger guard as a safety on an AR. I'm an old school guy and my mini 14 & 30 safety is identical to that lever. Lever inside the trigger guard is safe, outside is live. If I walk around with my finger inside the guard I may accidentally bump the safety off making it live and prone to accidental discharge. I keep my finger outside the trigger, and I accidentally bump the safety it with be bumped safety on, but I always keep my gun on safe till I'm ready to shoot. Gun Safety 101

Again another reason to treat all weapons as loaded and keep your finger off the trigger. All rifles and models are of a different design. I can pull the "safety lever" in to put it on safe, out of habit, when actually it is still live.

It's all basic hunters education class and anyone who owns or intends to own a firearm should take the class.

The best part is when the dirty pigs show up and their dirty retired pigs in the DLNR show up to show force.

It's classic intimidation ploy by the dirty pig Mafia.

Aloha to 2:54 PM,
This is an election year. It is the year when every Politician wants to be seen or not. There are a few that come out every year to the Senior Softball Opening Day Ceremony. There is one in particular that came dressed in Kuku's Aces uniform. She is Senior Age to play as some gals of the West Kauai and Da Kruzers. It is what it is. We should use our right to vote wisely.

Gun control is dead. We let children get slaughtered and it's okay as long as right to bear arms is protected.