There's a new cheekiness emerging among agrarian romanticists. They're convinced they should dictate how A&B's Maui land is used once HC&S stops producing sugar.

On the one hand, we've got anti-GMO activists collecting some 10,000 signatures for an initiative that would allow Maui County to condemn the land, with a citizen's committee deciding who gets to farm it.

How did they collect so many, so fast? In part by lying, and telling voters that Monsanto had first right of refusal for all that acreage. I guess none of them noticed the seed companies have been shrinking their footprint in Hawaii, not expanding.

On the other, we've got Maui Tomorrow's new report — “Malama Aina: A Conversation about Maui’s Farming Future” — envisioning an idyllic, all-pastels landscape of cattle feeding on remnant cane amid organic veggies, poultry, pigs, and tree crops, with nary a livestock-hater in sight. 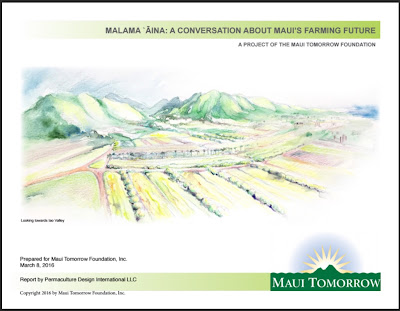 As the Star-Advertiser reports:

“Beloved Maui is at a crossroads,” the report said. “For 150 years Maui agriculture has been large-scale, mono-crop, chemical dependent, and export oriented. Can a new farming model bring both economic and biological benefits? The community has an opportunity to come together and help usher in a new era of farming on Maui.”

Gee, that's some nerve, commissioning a report from Oregon folks on what should be done with land that someone else owns. Does this mean that A&B, or any bloke on the street, should be able to dictate the activities of backyard gardeners, “yardners” and small farmers?

Of course not. It's only the big landowners who have been bad enough to warrant having non-farmers step in and tell them how things ought to be done.

Which always goes over a like a lead balloon. Especially since A&B has its own ideas, and no small amount of experience in implementing them. It's not like the company has never  considered diversified agriculture or tree crops. After all, it successfully transitioned sugar lands to coffee on Kauai, and has spent decades — and millions of dollars — trying to identify economically viable crops.

And that's key. In their push to pimp an agricultural Utopia, the dreamers always leave that really crucial economically viable part out.

The Maui farm initiative, which applies to all large ag land owners, not just A&B, flat out eschews profit-making. It offers no insights into how general obligation and revenue bonds used to buy the condemned land will ever be repaid, or the toiling farmers compensated.

The Maui Tomorrow report is equally long on fantasy and short on economic reality. As the Star-Advertiser reports:

Maui Tomorrow suggests that the regenerative farm vision in its report can yield far more profit than sugar cane farming for export while also employing more people than HC&S.

But the report does not provide any detailed financial analysis or feasibility assessments. It notes that ideas will need further research and require a large investment to carry out.

As the Star-Advertiser continues:

Yet serious doubt has been expressed about profitable large-scale farming supplanting HC&S. Local economist Paul Brewbaker said recently that if significant money could be made on the thousands of acres of fallow former sugar cane land that already exist on Maui and other islands, then it would surely have already been done.

Like, maybe by A&B itself, before it lost $33 million last year alone, trying to keep sugar alive?

Here's another example of the report's pie-in-the-sky thinking:

If A&B would sell the plantation at market value, Maui Tomorrow’s report said a community farm cooperative could be formed with all Maui residents represented as either worker-members or consumer-members with voting rights and profit shares.

Never mind that even small cooperatives have failed around the Islands because people just can't get along. Getting farmers to work together has been likened to herding cats, a scenario that becomes even more challenging with the addition of “consumer-members.” Plus how, exactly, would you even ascertain the market value of a 36,000-acre plantation on Maui?

Returning to the Star-Advertiser:

One challenge the report points out is that Maui lacks skilled farmers and infrastructure for diversified farming on more than 30,000 acres.

Now there's a news flash. But hey, they've got it covered. You just tell other people how to spend their money — "The report suggests that Maui County, A&B and nonprofits will have to invest in jump-starting new farming, including providing incentives and assistance to local farmers" — and then begin “recruiting successful farmers from off-island.”

Yup. Nothing like bringing in thousands more mainlanders to help further erode local culture and shift political power to the malihini.

Are you starting to see now what this anti-ag, dreamy ag, make-believe ag, wanna-be ag, pretend ag movement is all about?

That's right. It's the newest land and power grab in Hawaii, orchestrated by the latest batch of missionaries — those worshiping at the organic altar — and colonialists convinced they can “save Paradise” by making it more like the place they left behind.

Because if this was truly about implementing new methods and models for agriculture — feeding Hawaii — they'd be on it already, using the thousands of acres of fallow land found throughout the Islands.

But they aren't. They only want what somebody else — A&B, the seed companies — has already got.
Posted by Joan Conrow at 8:37 AM

A very pushy, scruffy-looking young haole guy tried to make me sign that petition, telling me that A&B already had plans to develop the whole 36,000 acres of sugarcane and that this was the only way we could prevent Oahu from happening here on Maui.

When I told him that A&B had already legally dedicated, through the IAL process, the vast majority of that land to stay in agriculture, he switched his story and said that Monsanto was taking it over and that we had to Malama the Aina. For the Keikis.

These people have no idea what they're talking about. And they lie shamelessly.

Tell a lie often enough and some folks will believe it.

Can anyone even imagine the price of vegetables if these nuts had their way? I recently read in The Economist that South Africa, in the midst of a drought, just suspended all laws regarding GMO. Apparently hunger does that.

"Farmers" start their work before the sun rises till after the sun sets. They don't surf, play tennis, go golfing, take jiu jitsu, or run in the park. They don't go shopping. They spend as much time on the farm as necessary. The people on Maui and here on Kauai are all talk. There is plenty of land here on Kauai to farm. Let's see it happen. These people are not committed enough to last. Towards the end they will go golfing, play tennis, do jiu jitsu, surf and the like. Because they will have found out the "farming" life ain't what they thought it would be. Wannabe's. Let's see it happen. Thank goodness for spam and Vienna sausage to hold us over till the next harvest.

Right on Joan...I said right from the start of this movement that these were modern day "missionaries" and if the people who have lived here all their lives and whose families were brought here by the "old missionaries" don't wake up and stand against this movement...Hawaii that all of us have worked hard for will be gone the new missionaries will do the same thing the old ones did .Bring in workers from the outside of Hawaii and pay them very low wages, everything that happened before will be spinning again...We, all of us born here's and flew here's who truly love Hawaii,,MUST FIGHT THIS MOVEMENT OF greedy OUTSIDERS WHO WILL RUIN US FOREVER......WAKE UP PEOPLE......

Who makes these things up? That view of Iao Valley assumes that there is agricultural land just down from the Valley. If you ever been to Maui you would know that that area is already well developed with housing. Oblivious to reality or are they suggesting that we tear down all the housing and plant crops? This is how ridiculous this dream is evolving.

It is almost humorous, these folks from the house at Pooh corner where SHAKA and Maui Tomorrow live, emerging with manifestos for what to do with the land that they say will soon be vacant, being abandoned by HC&S.

There are a lot of questions they need to answer, starting with the organic initiative video; how can we take this seriously when their spokesperson is wearing pajamas to give a public presentation? Have any of them farmed for a living? Farmed in rocky, windy conditions on an area larger than a back yard? Have they heard of property rights and free enterprise? Have they ever heard of economics, or of F.A. Hayek's observation that if socialists understood economics they wouldn't be socialists?

I would love to be laughing too, since this is beyond absurd, but do you all realize that if this gets on the ballot and these fantasizers vote it in, WE will be paying (through taxes) for all this land to be trashed.

Each one of these jerks somehow believes he or she has a say in someone else's property.

Kinda like their track record with Hawaii Seed's out grow Monsanto.... Much fan fare and little results. Sounds like a business model for going broke at the tax payer's expense.

They don't care even though they have heard it all.

Since 1980,five hundred and forty thousand acres of land that formerly were in crops are no longer being planted (soon to be increased by thirty-six thousand acres). Most of this land ended up as ranchland. What makes people think that this trend will suddenly be reversed. Look at what happened to the Kohala Task Force for a historical perspective of what happened when an attempt was made to convert plantation land into diversified farms.