Signaling yet another shift in Hawaii's valuable seed industry, the family-owned Beck's has purchased the former BASF Seed Research Facility on west Kauai.

Gee, I guess that means the antis can no longer paint the Hawaii seed industry as a bunch of demonic multinational chemical companies intent on ruling the world's food supply while poisoning everything and everyone in sight.

Instead, Beck's purchase makes it clear that seed breeding involves state-of-the-art research. What's more, southwest Kauai is an ideal environment for growing corn year-round, which allows breeders to intensify research so they can get products out to farmers more quickly.

So despite the wishes — and claims — of some to the contrary, seed companies are not abandoning the Islands. And good thing, since they're the most valuable sector of Hawaii agriculture.

According to a news release that Beck's issued yesterday:

As part of the purchase agreement, Beck’s will assume a license for approximately 1,000 acres of productive land on the island to advance generations of breeding nurseries year round. The land will also be used for parent seed increases and limited hybrid production to quickly deliver Beck’s newest seed innovations to farmers.

“The Beck family is focused on helping farmers succeed by increasing corn yields,” explained Scott Beck, president of Beck’s. “This investment is essential to providing our corn breeders with the tools necessary to develop the next generation of world-class seed genetics for farmers.”

Beck’s will immediately begin moving most of its winter research operations to the facility. The Kauai, Hawaii facility will initially employ seven full-time employees and up to fifty part-time employees at peak operating times.

Meanwhile, on the other side of the island — you know, where the antis reside — actress Julia Roberts has again dropped the price on her Hanalei Bay estate. The two-acre property, which includes a seven-bedroom, four-bath, 3,792-square-foot home, is now listed at $21.95 million. 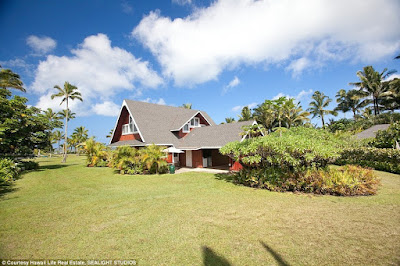 That's the second price cut since the property was first listed at $30 million in April 2015.  She bought it for just under $14 million in 2011. And property values have gone up that much in that time? No wonder locals can't buy homes.

Not surprisingly, the aloha aina warriors at Hawaii Life have the listing.

Its original owner was sugar plantation manager Hans Peter Faye. My, how things have changed with the demise of agriculture on Kauai. Or as Shiloh Pa would sing, "Whatever happened to Hanalei?" 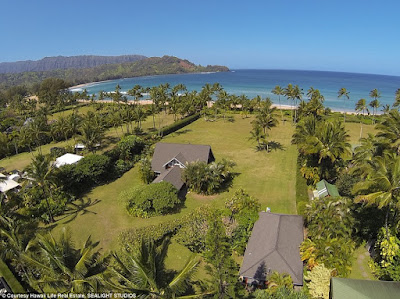 The property, which has about 200 feet of beach frontage on world-famous Hanalei Bay, is permitted to include an expanded building of up to 9,000 square feet.

PBN goes on to note:

Additionally, a partner in a hedge fund recently purchased several Hanalei properties for close to $50 million.

But don't worry. There's still room in the bushes for the locals.
Posted by Joan Conrow at 7:38 AM

Sweet Hanalei is now sewage soaked and owned by the rich and famous.Sure Julia, double the friggin inflated price you paid so no one can afford to live in Hanalei. Donate it to the land trust, how about that? Then you might be honored here on Kauai.

Roberts, like many Hollywood types, probably figured that her ownership alone added $15 million to the value. Kinda like how they think they the little people eat up their politics.

Speaking of Locals buying on Hanalei Bay.....The last one might have been the late Andy Irons.
Oceanfront on Kauai is not a market that too many locals can afford no matter what Julia has done or will do.

I bet there is more than 57 people taking care of all those houses in Hanalei.

Word "initially" means a lot. Seven is just a start with more to come later. For those who thought the seed companies were done on the west side, can say, "sorry about that".

Maybe they should get Woofers to teach them big ag farming. I'm sure the Anti's will welcome them with open arms and minds.

what sounds great is that they will be hybridizing and not doing gmos. I am glad to see this happening and hope to see more to come with companies who will actually grow food to eat and seeds for the many, many plants that people use for landscaping and food.

@11:36. What you desire is exactly what the seed companies already on-island are doing.

Also, hybrids can be GMO.

What is wrong with GMO? Why do people object to GMO? Are people dying of GMO?

It was a local who sold to Julia Roberts.

Sorry Julia, you cannot double the price in such short time. Who do you think you are? Angelina Jolie? Is Julia Roberts even a draw anymore in Hollywood?

Sure the market has gone up but not that much. Hanalei is already out of reach for the majority of the population of the world let alone Kauai.

My dad's friends have lived in Hanalei since the early 70s (I believe). They are just retired school teachers who bought early and built their home decades ago. Their home is now worth millions which they will never see, since they would never sell their home while alive. They would never leave Hanalei. But once passed away only their heirs will see all the money and "in" will come another multi-millionaire who will vacation there two weeks a year.

Genetics has always been a respectable science that has benefited all of mankind. Any tool, including GE, should be used to develop new and better food products,especially when GMOs are safe.

Who said Julia set the price? More than likely she hasn't a clue what prices here are. Did she ever stay in the Haena house?? From what the coconut says = never. Just her husband and one son, once. A beach access 50 feet from her home, she is just another Oprah who has enough $$ to stay away from anyone. What a rip!

Her fans wouldn't give her privacy. I would set up my surf school stand right in front of her house. Pitch a tent and hand out boards and jerseys waiting for the Pretty Woman. Rowwwwr.

Hanalei is a great place. Julia is a fine actress.
The old Faye house is on a good lot.....many memories in there. Many. Things change.
Change don't stop for no one.
“Life belongs to the living, and he who lives must be prepared for changes.”
Goethe
or as Martin Luther went go write
“If you want to change the world, pick up your pen and write.”

One good change would be to get Da Hoos, JoAnn and Moron off of the council.
Another good change would be if the council with a stroke of a pen --
changed the density and allowed at least an extra homesite on every Ag and residential lot on the island. 4,000 locals need homes today.
The Council writes the laws and gives the money.........The Council is the beginning and end of all taxes, laws, land density, car tax etc.
And Da Hoos wants to tax you.....Mason thinks you make over a 100 grand per year and JoAnn wants another 50 million so you can ride a shitty bus.
The voters must be crazy....electing such tax and spenders.

I don't think I realized that the cost of fame is that it's open season on every moment of your life.
Julia Roberts
I'm too tall to be a girl, I never had enough dresses to be a lady, I wouldn't call myself a woman. I'd say I'm somewhere between a chick and a broad.
Julia Roberts

Yeah, because if that beach front mansion was only 15 million dollars, local people would be lining up to buy it.

Face it, that house has been owned by the 1% since it was built.

We should welcome Beck's with open arms! Welcome to the west side Beck's!