Some Hawaii anti-GMO activists are now starting to question the money trail that has delivered so much to the Center for Food Safety — and so little to them — while accomplishing essentially, well, nothing — except for a lot of huhu and humbug.

From the Facebook posts of defeated mayoral candidate and anti-GMO activist Dustin Barca: 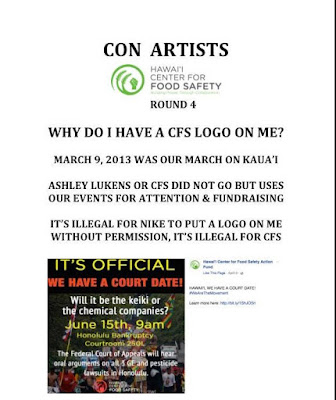 But then, political neophytes like Barca think all you have to do is march and presto, the world is changed. He doesn't realize that endless struggle, with no progress toward goals, is the essence of the Rescue Game and its one main rule: the game must go on forever.

As articulated by one of its leaders, Gary Hooser, following a screening of yet another anti-GMO documentary last week:

“This inspired me to keep the vision alive and the commitment going until these chemical companies leave our state.”

Which was followed by his stating an equally unrealistic goal, seeing as how so few of these activists have any understanding of agriculture:

“Let's become the model of self-sufficiency, of regeneration, of sustainability, of democracy.”

All while practicing an anti-democratic model of deception, distortion and zero transparency, as expressed so well by Maui anti-GMO activist Tiare Lawrence who apparently doesn't realize Hawaii CFS Director Ashley Lukens is a lobbyist:

Yes, they should be transparent, but not us.

Oh, and not to mention, silencing and censoring anyone who dares to disagree — again, from Barca's Facebook postings:

Gee, Dustin, now you know how I feel.

Which all segues into this next installment. After I published part one, I got this email from a reader:

Great article yet again.  But it begs the question (to me) as to WHY do these foundations fund this destructive crap?  I mean, what do they get out of it?

I get Gary Hooser doing it – he’s cynically trying to create relevance for himself.  I get Neal Norman doing it – he wants to develop the West Side and pocket more money.  I get the north shore hippie faction doing it – they’re shallow and easily manipulated and desperate to be able to affect something in a world where they are largely irrelevant.

But why these foundations?  Is it some offshoot of my shallow hippie rationale in which “corporate” = “bad” – hippies with bucks?

Have you ever tried to contact someone like Mr. Patel (below) and sincerely ask him Why on Earth would you do this?

By which was meant Ricken Patel, one of the co-founders of Avaaz, which in 2015 was CFS' top donor, giving the group $1.3 million. That's nearly double the amount awarded by the second largest donor, Ceres Trust, though Ceres' money comes manufacturing heiress Judith Kern, who appears also to be funneling dough through the Greater Milwaukee Foundation. Combined, those two sources gave CFS $1.275 million.

No, I have not asked Patel why he thought it was a good idea to give CFS $1.3 million to set up an “eBay-style” global seed exchange network. But perhaps he thought there might be something in it for his organization, which is all about capturing email addresses as a way to:

“Close the gap between the world we have and the world most people everywhere want. By signing up to receive Avaaz emails, members are rapidly alerted to urgent global issues and opportunities to achieve change.”

It's still unclear whether the CFS seed exchange venture is credible or gaining traction. CFS initially indicated that Vandava Shiva was on board with this initiative, then withdrew her name when she protested that she had not endorsed the project. (Though $100,000 of the Ceres Trust money was supposed to be passed along to Shiva’s Navdanya group for an “interconnected movement to save our seeds.”)

CFS helped Shiva establish her own USA funding apparatus via an NGO called “Friends of Navdanya” some years ago. Perhaps Avaaz and CFS thought that a global network of seed savers would add numbers to the Avaaz email roster, purportedly 45 million at present, and build the CFS support base, too.
Judith Kern may be more ideologically motivated. Her husband and co-trustee, Kent Whealy, was a key player in the nonprofit Seed Savers Exchange until he was booted from the organization for criticizing its decision to send some seeds to the doomsday vault at Svalbard, Norway. Now Judith is funding similar activities at CFS, giving $500,000 for the broad initiative "Creating a New Food Future—Protecting Our Farms, Our Food and Our Environment."

Additionally, the Ceres Trust made seven grants to the Pesticide Action Network totaling $760,000 in 2015. This was coupled with a $45,000 grant to CFS for an “Annual Hawaii Strategy Meeting,” a $120,000 grant to Hawaii Seed to “end pesticide exposure and GMO field tests in Hawaii, plus $90,000 to Hooser's HAPA group. I'm sure it was just a coincidence that all this money was flowing into Hawaii the same year that Peter Adler began conducting the joint fact funding study on "big ag" pesticides.

This is the sort of grant-making that eludes press attention when Hawaii News Now makes a feckless comparison of anti-GMO and seed company expenditures.

Ceres gave HAPA $50,000 for general operating support in 2015 and and another $40,000 to host “Challenging global impacts of the agrochemical industry: An International Food Justice Summit.” But though that summit brought in grants of $105,000, just $45,439 was actually spent on the event. Some $19,759 went to run the Kuleana Academy, HAPA's training ground for so-called progressive candidates. But the biggest chunk, $89,139, was expended in this nebulous manner:

Where are these people going? Especially when you consider that Hawaii SEED spent $48,230 on travel in 2014. Are they flying people in to testify at meetings? Footing the bill for the supposedly independent journalists and filmmakers producing all this anti-GMO propaganda?

It's very hard to tell, given the lack of details in the reporting.

Perhaps Barca and his friends should be asking Jeri and Hooser where their dough went, too.

Because they're all spending large, with no results. And apparently none of that kala — or not enough — is trickling down to Barca.
Posted by Joan Conrow at 6:15 AM

Joan you are quoting crazy people who you have previously acknowledged as being whacko and now you state there posts somehow add value to this conversation? Why would one rant about the Rothchilds, the Illuminati or the Federal Reserve, or the Center for Food Safety have more credibility than any other?

Nice attempt to change the subject, 7:50, but Barca's rants are relevant in this case because he was at one time on the anti-GMO gravy train, CFS is the major player in the Hawaii anti-GMO movement, and it's always interesting to see dissension within the ranks.

It does not mention Ashley.

It is really hard to find a non-profit/charity to support. As Joan has pointed out, they often say one thing but do another.

Charity Navigator has "good press" about it. If someone has a better suggestion...

The reap what you sow metaphor for the anti's current division is just too good. Although I can't help but think that Barca is just mad because he's not getting paid

John Kauai: "Charity Navigator has "good press" about it. If someone has a better suggestion..."

Uh, how about bearing witnessing what the group has actually done in Hawaii? Or paying attention to all the reporting I've done on its lack of transparency and deceptive campaigns? But then, that requires a bit of critical thinking, as opposed to latching on to the formula that Charity Navigator uses to rank.

Joan with your employment with the Cornell Alliance for Science, you are hardly an impartial observer. You actually think your rants against Ashley are more credible than Charity Navigator?

Yes, 8:31, I do think my exposes of Center for Food Safety are more credible than the "good press" awarded to the group by Charity Navigator. That's because Charity Navigator just uses a formula. It doesn't delve at all into how these groups actually perform in the world.

And I think I've done a very thorough job of documenting the many lies and deceptive techniques that CFS has used in Hawaii and elsewhere, its very slow tax reporting and its lack of transparency in its funding sources and expenditures, not to mention the false tax reporting by its president, Andrew Kimbrell.

Working with Non-Profits is a crazy business... Some agencies are eligible for grants vs. donations, whereas some need a charity to handle donations then create a grant from the donation... The same is true for Monsanto vs. Whole Foods.

Find a non-profit to act as a fiscal agent, then Monsanto can donate X $ for Y purpose, then the non-profit can give that grant, and Monsanto is no longer attached as the funder.

Corporations usually handle their own charity donations, since they want their name attached, it's the family foundations, corporate advocate groups, and odd 'small' players that are happy to play the money funneling game, in my opinion

Joan@8:26, your position is well known. I see no reason to mirror it. You do note that I did not say your post was mistaken. I'm only offering a different option for researching the non-profit.

The Federal grant money that funds these Hawaii food activist groups is so drying up under Trump.

What federal grants are they receiving? I didn't see anything in parts 1 or 2 about federal monies.

Trump will take care of all these little whiners. Concentration camps for dissenters can't be far off.

Hooser is pulling in $300,000+for HAPA? That makes me want to puke. He never could get any money to help Kauai when he was on the council or senate. Only now he gets it to benefit himself. Disgusting.

Great work again Joan. I was curious about your thoughts on the GMO bill currently being proposed in Oregon. See Portland Times March 17th. Basically accessing damages for drifting damage. Thanks

I see TGI has an article about Submarine Groundwater Discharge (SGD) harming reefs due to transporting excess nutrients from septic tanks and home pesticide and other chemical usage. Wonder if CFS, HAPA et al will use this information to propose bans / restrictions on development to "protect the aina and keiki"? Not holding my breath on that...