Big houses with zero connection to farming have been popping up all over Hawaii's agricultural lands in recent decades.

Now the state Legislature is working to exacerabate the problem by advancing a bill that would authorize "tiny houses" — mobile or stationary structures under 500 square feet — on ag land.

Though these "tiny houses" are being promoted as a way to "help" farmers by housing their workers, the potential for abuse is huge, especially given the inability and/or unwillingness of county governments to enforce the existing state law pertaining to farm dwellings.

Currently, the bill is written so that it would apply only to the Big Island, though it won't be long before Maui County meets the criteria of "a population of more than 180,000 but less than 250,000."

Neither the state Department of Agriculture nor the Hawaii County Planning Department support the bill, which would let anyone who pulls a business license build an unspecified number of tiny homes. Both entities submitted testimony in opposition, with Big Island Planning Director Michael Yee noting the "great potential" for "unintended abuse" of ag lands.

That's being diplomatic. The ag land abuse proposed here is very much intentional. Consider, for example, one of its proponents, as featured in a recent Civil Beat article:

Eila Algood is both a poet and a farmer. On her 34 acres of agricultural land in North Kohala, Algood plants trees to help reforestation efforts, and harvests eggs from her15 chickens to sell. Algood says she can’t afford to hire the farmhands necessary to expand her operation because paying employees a living wage in Kohala is not within her means.

Fifteen chickens and trees to help reforestation efforts? That's not farming by any stretch of the imagination. This bill is simply a ploy to put sub-standard rental housing on ag land, resulting in a proliferation of rural ghettoes and the continued erosion of the agricultural district.

If Big Island Reps. Cindy Evans and Richard Creagan are serious about helping farmers, they should stop eroding agricultural viability with their crappy bills. Instead, initiate a process of reclassifying nonproductive ag lands into the rural district, where they could be properly developed as housing.

Of course, inept legislators aren't the only ones harming real farmers and making a mockery of the ag district. The smarmy developers of the Coco Palms Resort are now trying to create a luxurious gated community of eight homes on 38 acres of ag land in Kapaa Homesteads. 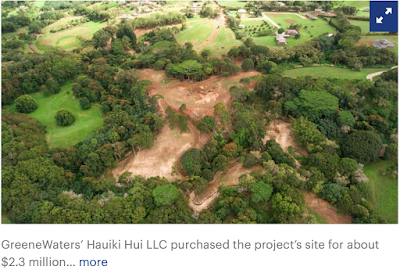 Dubbed Hauiki Ranch, the project, which is located on Hauiki Road in Kapaa, will also include 25 acres of common area for the community.

“This is the most beautiful 38 acres I have seen on Kauai,” Chad Waters, managing partner of GreeneWaters, told PBN. “There is a beautiful stream and waterfall that bisects throughout the property.”

Stream-diverting hydropower and bird-killing wind turbines on Kauai? Where has Waters been the past few years when such proposals have been bitterly beaten back? Not to mention the community's antipathy toward gated communities.

Gee, I can't wait to see the activists attack a non-ag project for a change, instead of focusing all their fury on viable agriculture. But will they?

Meanwhile, Kauai's anti-dairy group, Friends of Mahaulepu, joined Big Island Dairy opponents in a bitch session with Gov. Ige yesterday. Never mind that the proposed Kauai dairy has a different model than the Ookala dairy, which has been supported by the Ulupono-funded Local Food Coalition. FOM's Bridget Hammerquist is keen to draw a catastrophic connection.

Hawaii County Council Chairwoman Valerie Poindexter is helping to lead the charge, using rhetoric taken straight from her anti-GMO playbook. Big Island Dairy is being targeted in part because it raises GMO corn to feed its “industrial operation.”

Bridget is incensed that the proposed Kauai dairy would “use 3 million gallons of water daily, a significant impact on a resource that is becoming increasingly more precious.”

Yet nary a word is said about all the water used by the Grand Hyatt and other Poipu hotels. Not to mention Bridget and her other johnny-come-lately homeowner pals on the southside.

We're hitting showdown time, folks. If people keep bashing ag into oblivion, it's going to be replaced with hotels, tiny home ghettoes and more luxury home gated communities. The choice is yours. Just don't be pretending that those other uses are somehow impact-free.
Posted by Joan Conrow at 6:56 AM

Just what we need on the east side, more development. How is the coco palms going? 3 million to tear out some old asbestos, I think these guys may be lining their pockets with investors money. Do you think?

Enough with the pimping of AG land. Everyone here, including myself need to do something. No more building gentlemen estates on AG land and no more TVRs on AG land.

Call the county planning commission and complain about the illegal Bnb's on AG land: The Kauai Retreat Center in Waipake/Kilauea and the Palmwood in Moloaa.

The health dept should be sued along with the property owners with the improper extraction and disposal of asbestos.

I was waiting to see how many people paid attention to that problem but most don't know shit or care about shit and I'm glad I'm not the only one.

Right now everyone who has passed by coco palms could suffer from asbestos exposure.

Maybe we can get a whole bunch of people hear to complain about TVR and Bnbs on AG land and the fact that nothing has been done about your Abuse Chronicles.

You whiners don't even know the rentals owned by locals and haoles who rent bedrooms, side rooms, and garage rooms to make ends meet and can't afford lawyers shut down. The rich just laugh at you. They will never shut down. The Erricos house on Pinetrees rents for $4000 a night. They don't even have to advertise. There a ton more just like it and there ain't nothing you can do about it. Their rich and your poor and no matter how much Joan rants and raves the only people she is hurting are the people just trying to make ends meet.

Isn't talking on cell phone when driving illegal? Children riding in a car not in a car seat illegal? Smoking pot illegal? Drinking at the beach parks illegal? Driving on beach? Tinting you vehicle windows over a certain percent? Driving over the speed limit? Minors driving in the back of a truck when there are seats empty? .... Funny how "locals" get all fired up about vacation rentals being illegal and want them enforced but what would be their response when their "illegal" activities started being enforced?

As a local boy I'm insulted by your assumptions. Are all you transplants racists?

Tell that to the 2 year old who flew out the windshield at Kealia local boy. Maybe it's time to start worrying about the real problems that are plaguing locals and stop pretending rich pricks living on the beach has anything to do with it.

You're assuming that all locals talk on cell phones when driving or drive while their kids arent in a car seat or smoke pot or drink at the Beach Parks or speed or put their kids at risk. And as if you trannys never engaged in that kind of behavior.

Wow! so much hatred. No aloha.

That not one assumption that culture brah

What wrong with smoking a little weed or drinking at beach parks?

Our island has lots of problems, most obvious is disrespect. My heart is sad for the loss and I don't even know the families. Asking for the rich white folk to have some respect here.

Most of the people I see cross the center line are tourists, some locals, people on their cell phone, and stupid drivers but this was not the case for the 4 deaths.

Go interview some of the white kids at local high schools if you want to learn about racism. It's definetly not just white people who are the racist.