Earlier this week I wrote about Hawaii Community Foundation, and how undisclosed donors can funnel money through such entities to gain tax breaks and discretely influence policy.

As a friend noted:

What's going on at HCF is reflective of a massive national trend. A lot of new wealth philanthropists are dumping money into community foundations. It saves them the bother -- and accountability -- of starting up their own foundations and the more activist types quickly grasp that their donor-advised giving affords them anonymity. Meanwhile, the working press has been very slow to catch on to the "new politics" of using NGOs rather than political parties to advance their causes; hence, the philanthropy game eludes attention and public understanding. All this furthers the hard right and hard left and the various forms of disinformation and silo communities they create and nourish. It's bad juju and our friends in Russia have figured out that it's also a platform for creating havoc.

Yesterday, President Trump waded into the issue by signing an executive order that prevents the IRS from expanding its restrictions on political activity by religious groups. Currently, a tax-exempt group can lose its exemption if it is found to have endorsed or actively opposed a candidate for political office. Though his order does not change that prohibition, it prevents the IRS from expanding the restrictions

Though the actual order is more symbolic than substantive, evangelical Christian leader Russell Moore was already pushing for more:

"The very fact that religious freedom is part of the conversation and religious freedom is being affirmed I think is a step in the right direction. Now obviously if this is the end of the story, I'm really disappointed, but I think we ought to hold out the hope that this is just the beginning and that there are more steps to be made."

Meanwhile, a new report shows that the cultivation of biotech (GMO) crops has reached an all-time global peak, with nearly 90 percent of the crops grown by small-holder farmers. Developing nations planted 54 percent of the total. As I wrote in a blog post for the Alliance for Science:

Biotech crops also have achieved significant environmental benefits, according to the report. These include cutting herbicide and insecticide use by 19 percent; reducing CO2 emissions —largely due to reduced tillage — equal to annually removing approximately 12 million cars from the road; and conserving biodiversity by sparing 19.4 million hectares of land from agriculture in 2015.

I also found it interesting that GE crops also expanded in Europe, which is often touted as anti-GMO. Spain, Portugal, Czech Republic and Slovakia increased their cultivation of biotech maize by 17 percent between 2015 and 2016. 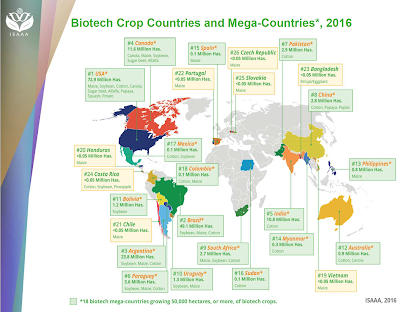 Further GE crop expansion is expected with the recent approval of two potato varieties and the Arctic Apple, which is now being sold as packaged slices. In Africa, field trials are under way to develop pest- and disease-resistant varieties of cowpea and banana, two important subsistence food crops.

And though Earthjustice has been busy taking credit for putting water back into the Waimea River, its recent Star-Advertiser commentary and last night's Kauai community presentation has been scant on actual details. Here's what the mediation settlement allows:

The Kauai Island Utility Cooperative (KIUC) will assume responsibility for the operation and management of the Kokee Ditch system up to the Puu Moe Divide if it is able to execute a land agreement with the state Agribusiness Development Corporation (ADC). Kekaha Ditch will remain under the management and operation of Kekaha Agriculture Association (KAA).

KIUC is allowed to divert a rolling average of 11 MGD at the diversions, and will be charged with delivering irrigation to farmers on ADC mauka lands, tenants on Hawaiian Homelands Puu Opae mauka lands, and farmers on ADC land on the Mana Plains, as well as providing storage for these irrigation users at both Puu Lua and Puu Opae Reservoirs.

KIUC has an agreement in principle for its pump storage hydro project, which includes renovating three reservoirs, adding two power houses and associated equipment. But it still must execute final agreements with DHHL, ADC, and DLNR before it can proceed. The project also needs environmental, historic preservation and other permits and approvals, and it must prove to be economically viable for KIUC and its members. KIUC spokeswoman Beth Tokioka noted, “We anticipate roughly two years of study and permits before KIUC can make the decision to proceed with the project.”

Finally, Time magazine has a troubling report on our lack of preparedness in dealing with the next global pandemic:

From Ebola in West Africa to Zika in South America to MERS in the Middle East, dangerous outbreaks are on the rise around the world. The number of new diseases per decade has increased nearly fourfold over the past 60 years, and since 1980, the number of outbreaks per year has more than tripled.

Research groups are working feverishly to predict the next pandemic before it even happens. They’re cataloging threats and employing next-generation genetic-sequencing tools to speed the discovery of new or mysterious viruses. They’re helping identify and track outbreaks as they happen.
But microbes evolve about 40 million times as fast as humans do, and we are losing ground. “Of all the things that can kill millions of people in very short order,” says Dr. Ashish Jha, director of the Harvard Global Health Institute, “the one that is most likely to occur over the next 10 years is a pandemic.”


Speaking of risks, one police department found a humorous way to build traffic on its Facebook page: 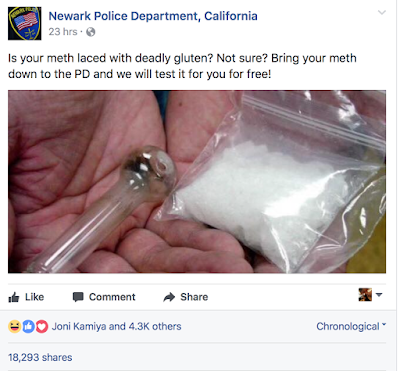 I just had organic mushroom raviolis for dinner. They cost the same as the gmo ones. They tasted better too

I had an organic Pepsi and it tastes mo betta!

I just ate an orange from my tree. Never had one ready to harvest this early in the year. It was organically grown and too old to be GMO, but I'm worried more about the climate change that is causing weird growing seasons.

You know I was wondering if my meth had gluten. I've been feeling a bit jittery lately and that's always a sign of gluten intolerance. Now I know.

I don't why but the fruit from our orange tree is soooouuuurrr! ???

Peasant and small scale agriculture is an integral part of food sovereignty and nutrition. According to the FAO, (Food and Agriculture Organization of the United Nations) peasant agriculture provides around 70% of the food consumed globally, including the food consumed by the majority of those suffering from extreme hunger and malnutrition. Furthermore, it produces this food with just 30% of the resources and inputs used in agriculture. It uses around 20% of fossil fuels and 30% of water and is based on an enormous genetic diversity, using around 8000 livestock breeds and millions of plant varieties. Globally there are an estimated 1.5 billion peasant farmers, 800 million urban gardeners, 410 million people relying on forests or savannas as a primary source of food, 190 million pastoralists and over 100 million peasant fishers. This is in stark contrast to industrial agriculture, which accounts for only 15% of the food that is traded internationally, but accounts for more than 80% of the fossil fuels and 70% of the water used in agriculture. It also uses a narrow genetic base of less than 100 livestock breeds and 150 plant specials. Nevertheless, the industrial agriculture sector benefits from the vast majority of funded research. 96% of all recorded food and agricultural research takes place in industrialised countries and 80% of that research is focused on industrial food processing and retailing.
Source: http://www.etcgroup.org/sites/www.etcgroup.org/files/
web_who_will_feed_us_with_notes_0.pdf

@5:28 It's more than a little disingenuous for you to claim this is based on the FAO, when the citations show few links to that group.

In any case, the argument among ag and anti-poverty advocates has always been that ALL types of agriculture — including peasant and small-holder ag — are needed to feed the people and improve incomes in developing nations. As I noted, 90% of the biotech crops are grown by small-holder farmers globally.

Only the pro-organic folks are insisting that only organic ag is suitable. Oh, and since you seem to have missed the news, the "peasants" are disappearing, especially in urbanized and industrial nations. Of course, you are always welcome to leave your comfortable western lifestyle and engage in peasant ag since you find it so attractive and virtuous. Just don't try to stop farmers from exercising their own choices on how they want to practice farming.

Yes, and remember, we are 'feeding the world' with 'packaged - in plastic - of slices of GMO apples amongst other redic gimmicks.

@7:45 -- Oh, come on! Have you looked recently at how many packaged in plastic, organic convenience foods are on the market?

How can you stand some of the comments on your blogs, Joan?

"Peasant agriculture"? "....including the food consumed by the majority of those suffering from extreme hunger and malnutrition?"

Has 5:28 AM ever wondered about the causes of that extreme hunger and malnutrition?
Or ever traveled to witness the type of agriculture she/he espouses?

Is 5:28 AM implying that given the choice of being well-fed and having a less miserable life, these "peasants" would choose less productive agriculture, and therefore starvation and malnutrition?