That full moon shone brightly all night long as roosters crowed, rats scratched and scurried, cats fought and dogs howled, but by morning it had been swallowed up by clouds that delivered heavy rain showers, making it easy to return to the world of vivid dreams that had entertained me for hours.

But I was eventually roused from my slumbers when one of my neighbors, who has a metal shop, began banging on something, loudly. I don’t have an alarm clock, but my neighborhood ensures I’m no slug-abed.

And neither are those who already filled my inbox at any early hour with interesting tips, such as news that our own Sen. Gary Hooser has introduced SB 2526, which seeks to prohibit cruise ships from burning bunker fuel within a five-mile radius of Nawiliwili Harbor, beginning Dec. 31, 2008.

This is in direct response to complaints from Lihue residents who are tired of breathing toxic emissions and having soot rain down upon them because cruise ships are burning that crappy fuel 24-7 while docked at the harbor.

The bill notes: “Adverse health effects from inhaling fumes from the burning of bunker fuel oil (according to the Material Safety Data Sheet, United States Oil and Refining Company) include eye irritation, skin irritation, nausea, vomiting, diarrhea, andr estlessness. Furthermore, similar materials contain a like chemical ingredient that has been associated with causing skin cancer on test animals. According to a recent study published in the Journal of the American Chemical Society, air pollution from cargo ship exhaust has been linked to the premature death of sixty thousand people worldwide in 2002. Most of those deaths resulted from heart and lung ailments.

Good work, Gary. Now that’s the kind of responsiveness we like to see in our lawmakers.

For those who care about the fate of Newell’s Shearwaters, there’s a meeting from 6 to 8 tonight in the Planning Commission Conference Room in the Moikeha Building in Lihue on KIUC”s application for an incidental take permit. The federal permit would allow our utility cooperative to kill a specific number of the threatened (if not already endangered) birds without penalty.

As The Garden Island reported: “Following a March 2007 Department of Justice investigation, KIUC was required to obtain the permit last year because its power lines, facilities and unshielded lights unintentionally harmed the endangered and threatened seabirds.”

I'd have to question the reporter's use of the words "unintentionally harmed," because KIUC has known for well over a decade that its facilities are killing Newell's. But it has been reluctant (citing costs) to underground certain sections of power lines that are particularly lethal because they stretch across routes taken by the birds in their daily travels between the mountains and sea during nesting season.

The state has gotten more aggressive about going after those with unshielded lights that attract the birds, and KIUC has helped fund the Save Our Shearwater rescue program. But it seems time the utility bite the bullet and deal with the cause of the fallout, rather than focus on picking up downed birds or killing more with impunity.

Quite frankly, we don’t need any more scenes like this of a young Newells, which a friend of mine found dead last October under a power line, at the end of Kekaha Beach Park: 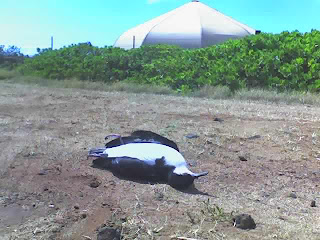 so sad about the shearwaters but even more tragic is the lack of government's response to resident's complaints and concerns about the impact from NCL's decision not to burn cleaner fuel while alternatives are available. island breath.org has a post regarding the issue and history of the niumalu residents' struggle for environmental justice. the dept of health and dept of transportation-harbors division should be should for failing to adequately monitor and manage the onslaught of carcinogenic exhaust from NCL smokestacks.
mahalo joan for keeping these issues up front and center.

Aloha Joan - Thanks for bringing this to the attention of many. We've been struggling for awhile with NCL and DOH to no avail. A few residents have already sought medical attention and on Kona winds I have even sent kids to the healthroom @ Kauai High School. Having to seal up our homes and in some cases leave, seems to speak to chapter 11 of the Hawaii Administrative Rules and 1978 Con Con:

Each person has the right to a clean and healthful environment, as defined by laws relating to environmental quality, including control of pollution…

DEPARTMENT OF HEALTH
Amendment and Compilation of Chapter 11-60.1
Hawaii Administrative Rules
SEP 16 2003
§11-60.1-1
"Air pollution" means the presence in the outdoor air of substances in quantities and for durations which may endanger human health or welfare, plant or animal life, or property or which may unreasonably interfere with the comfortable enjoyment of life and property.

I witness the shearwater tragedy around the Harbor and Vidinha lights- it is a travesty. Presently, however, I am consumed with survival for the humans in the area-downwind of the Cruise Ship Smokestacks.
If there is anyone who can help/support our effort to improve air quality they are most welcome to contact me at: Ocraft@hotmail.com

Mahalo for aknowledging Gary Hooser's effort to help us with SB2526. The profit before people in this case is criminal and it is a shame the DOH and DOT have not prevented the need for this legislation.