Musings: In With a Bang

New Year’s came in with a snap, crackle, sizzle and pop in my neighborhood, with several hours of firecrackers leading up to the big show at midnight. And what a show it was! Some folks living about a quarter-mile down the street had a huge party, with an aerial show that lasted 20 minutes or so, followed by a good five minutes of solid firecrackers.

The rain, which had been intermittent through the evening, stopped just before midnight and my friend and I went out in the road to watch the display. As we were ooohing and ahhhing at the overhead show, my neighbors on the other side were setting off rockets and ‘crackers, while the rhythmic boom of the homemade cannons drifted up from the valley.

Koko sat calmly at the end of her leash and took it all in. Rustle a newspaper and she runs, smack a fly and she’s outta there, but thunder and firecrackers don’t faze her a bit. It makes me wonder about her life before I met her.

Before the fireworks went off I was watching Cate Blanchett in “Elizabeth,” so the battle scenes between Britain and the Spanish armada were a good lead up to watching people spend serious money to blow stuff up.

One good thing: my friend said a lot of the new fireworks fully disintegrate as they explode, so there isn’t all that rubbish left to clean up.

While last night’s show was the best aerial display I’d seen in many, many years, nothing has ever topped the New Year’s Eve I spent at Hugh Clark’s home on the Big Island. He was gone to visit his family, and I was staying at his house while filling in for him at the Advertiser and watching his dog.

I was talking to my sister on the phone when the fireworks started, and the roar was so deafening, we had to hang up because we couldn’t be heard. I went outside and the sky was ablaze with color, the air thick with smoke.

I was all alone, and I didn’t mind a bit, because I was tuned in to the exuberant energy all around me. It went on for a long time, too.

Last night, the excitement was again palpable, and the chilly air was highly charged, and the clouds parted and the stars sparkled overhead. And then the din slowly died, the clouds moved in, the rain resumed and 2008 had begun.

Wishing us all peace and love in the New Year. 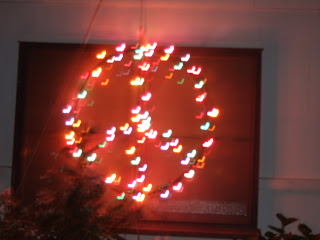 waaay cool! refractive hearts! adds a lot of color to the spot, but aren't you afraid that people will find out you are a hippie behind the blog?