I was lucky enough to be out among the albatrosses this morning, although Koko, unfortunately, had to remain at home. She isn’t too good at impulse control and I didn’t want to risk any dead birds, especially since the chicks are so vulnerable. 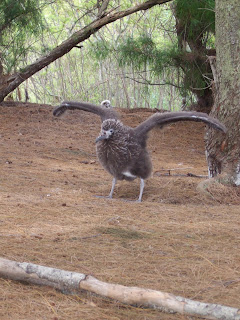 Surrogate parents successfully hatched two of the eggs taken from PMRF, and the chicks are recovering well from a bout with pox. At two months, they’re all fluff and emerging feathers, but starting to get the idea that in another three months or so their wings will be their ticket out. 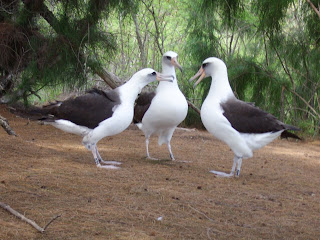 A few juveniles were hanging around the colony, crooning and bobbing and taking advantage of the brisk trades to perform aerial acrobatics without a bit of flapping.

It’s so amazing to enter their world, lying on a bluff above a green and frothy sea, with iwa and flocks of red-footed boobies skimming by at eye level while whales spout offshore and squalls blast through. Being here is the joy-infuser, I told my friend. Yes, she agreed, a few hours with the 'trosses is indeed a very effective bullshit antivenom.
Posted by Joan Conrow at 1:39 PM

Thanks for the great photos, Joan.