With all the recent cloudy weather, it’s been a while since the stars were out, but they were last night, in all their glory: Orion, the Big Dipper, Pleides and numerous other individuals and constellations whose names remain unknown to me, all sparkling brilliantly in the cold blackness.

The darkness was gone, but the cold remained — the thermometer in my house read 57 degrees — when Koko and I went out walking in a dawn that was every bit as resplendent as the night. It started with a pink glow around the edges, then went gray, then gold streaks emerged and the mountains lit up, glowing in that special way they do, climaxing in a pink pile-up atop Waialeale, with a pillar rainbow connecting heaven and earth.

And all the while my neighbor Andy and I were talking about Hawaiian women warriors, Galileo and the large frontal lobe characteristic of human brains, which I maintained was perhaps not such a great thing evolutionarily, as it’s gotten the human race into the kind of pinches that could ultimately lead to its extinction.

Andy said the problem wasn’t the frontal lobe, but that humans don’t seem to learn.

I can’t argue with that, and saw evidence of it this past two days, when monster surf pounded the northeast coastline, piling up a couple feet of sand under the heliotrope trees and cleaning all the debris off the beaches. It also nailed the Lizama house and greatly eroded the makai side lane of Aliomanu Road, which leads to that house and others.

The situation there is a perfect example of folks failing to learn about the deleterious effects of seawall construction, and of citizens failing to learn that the county government does not act swiftly, if it even acts at all.

The seawall in question was built illegally some 28 years ago to protect the Morgan property — where a large vacation rental house now stands — north of the land that the Lizama family bought back in the 1930s.

In the years since, the seawall has led to the steady erosion of the coastline south of it, including the Lizama property, Aliomanu Road and land owned by the Lemkes, who were forced to move their house 40 feet mauka to keep it from toppling into the sea.

The house was even featured on page 20 of a state booklet, Natural Hazard Consideration for Purchasing Coastal Real Estate in Hawaii.

According to an article in The Garden Island, Buddy Lizama warned the planning commission back in January 2007 that the house could go in the next big storm:

The nearly three-decade-old battle with the private builders of the wall and the county has left the property owners doubting if government can properly protect its citizens when a wrong has been committed.

“Government screwed up,” Lizama said. “That is why we are where we are today.”

If the home breaks up and debris litters the reef, the homeowners — all retirees of state and county government — will be liable for a cleanup they can ill afford, Lizama said.

Meanwhile, state and county officials were alerted last Wednesday that the house was collapsing onto the beach, as these pictures show. 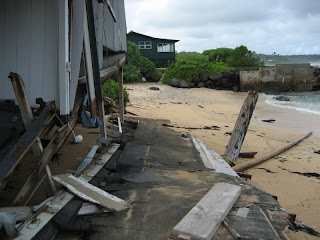 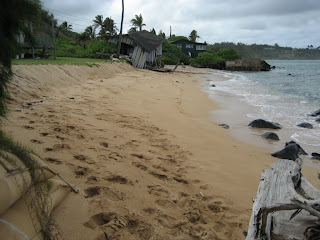 According to an email response from an official with the state Office of Conservation and Coastal Land:

…the landowners are under order from the DLNR to keep all the debris cleaned up off the beach. We may need to respond to this latest failure to comply with this order if they do not clean up the mess. They have also been advised (strongly recommended) to demo the house several times. As far as forcing removal, the DLNR has felt this is a county responsibility since they permitted the dwelling in the first place.

Well, I don’t think they’re going to have to worry much about the clean up any more, as the ocean seems to have taken care of some of that problem.

But has the county learned from this boondoggle? Of course not. As you may recall, it built its own seawall — without a permit — behind Pono Kai and lo and behold, the subsequent erosion is jeopardizing a portion of the newly built coastal path. So to “solve” the problem, the county plans to spend at least $2 million to build another seawall on top of the existing one.

The surf also took out a lot of naupaka, much of it planted by homeowners trying to extend the size of their lots. Thanks to the efforts of Kauai residents Caren Diamond and attorney Harold Bronstein, who fought the issue all the way to the state Supreme Court, it’s now clear that that the public beach extends to the seasonally highest wash of the waves. And as we saw this past weekend, the public beach is a lot bigger than some of the coastal landowners have been pretending.
Posted by Joan Conrow at 9:06 AM

wonder why it was so hard to bring action against that (illegal?) seawall put up by the lot owner

Long time local families get screwed so that recent arrivals can build their obnoxious vacation rentals? There are so many things wrong with this picture and than you have the state/county governments repeatedly dropping the ball to fix this mess that they created. Sea walls have eroded the beaches of Kailua and Lanikai on Oahu to the point of no return. When our govenment officials going to wake up do their jobs? Utter stupidity.

If you want to blame anyone, blame FEMA - the owners were under order to remove it. The owners wanted their FEMA money, which would only occur if the house were 'lost' in a storm event.