Musings: Desecration in the Hood II

It seems there was a bit of action yesterday at the house that Joe Brescia is building atop burials at Naue, what with kids coming to pray, sing and chant to the iwi — prompting contractor Joe Galante to call police — and all the tree-cutting that was going on for the second day in a row.

Since the police were there, anyway, taking Galante’s complaint, Caren Diamond took the opportunity to file a complaint of her own about Bresica et.al. fencing off the public beach. 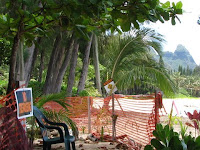 Now this is an interesting issue, with statewide implications, and while it’s a bit convoluted, I’ll try to present a synopsis of it here. Essentially, Brescia’s shoreline certification survey, which defines the extent of the public beach for the purpose of determining the construction setback, was set in July 2005, at a time when the ocean there is at its calmest.

The state took some 16 months to approve the certification, during which time Caren won her state Supreme Court case that defined the public beach as extending to the seasonally highest wash of the waves. Caren and the North Shore Ohana appealed the certification, based on that ruling, and Bresica also appealed it, because he wanted to be closer to the water than the certification would allow.

The state didn’t grant either appeal, rejecting Caren’s “proferred evidence” of nine years of photographs showing waves washing up onto Brescia’s lot. Brescia put up orange plastic fences to mark the line, and Caren got more pictures of waves knocking them down.

That certification expired in 2008, but after Brescia began constructing his house, he erected new fences along the same boundary, posted with No Trespassing signs.

So the question now is, does the line used to determine the house setback become his private property line forever? Is the shoreline fixed at the time of development? It’s not supposed to be, under a new county ordinance that prohibits fences within 40 feet of the setback in recognition of the fact that the shoreline migrates.

Caren’s complaint to the police yesterday was based on the premise of “you can’t keep people off the beach based on an outdated shoreline.” And since the state approved the shoreline without using any historical data, “what happens when the owner wants to make it permanent? How does the public get the beach back?"

The issue is complicated by the fact that the county allows owners to irrigate and landscape up to the shoreline, so they cut down the beachfront shade trees and plant lawns and naupaka hedges and pretty soon they don’t need fences, because they’ve got a natural barrier to keep the public off land that, under the Supreme Court ruling, quite often is public beach.

In looking back at the article I wrote about Caren’s case, I found a quote from then DLNR director Peter Young:

‘If someone considers it the ownership line, we correct them and tell them it’s not.’

Problem is, the burden is on the public to prove it with photographs, which can lend to conflicts between residents and property owners. Joe Galante wasn’t too pleased to see Caren taking pictures at the site, and she said he approached her in a “menacing” and “threatening” way, demanding to know what she was doing and videotaping her as he stood on the land in question. 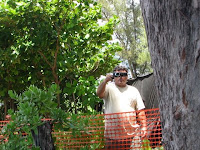 On this particular day, Caren was also acting as a community monitor because trees were being cut, and apparently some root balls were removed. Nancy McMahon of the State Historic Preservation Division said no ground-altering activities can be conducted without an archaeologist on site, and since she had received a number of complaints, she is reportedly going to check it out, as is county inspector Les Milnes.

As you can see in these two pictures, some of the trees that were cut are quite close to some of the iwi, which are surrounded by orange fencing. And since some of the burials are described as “scattered remains,” it’s possible that bones could be found in the adjacent area. 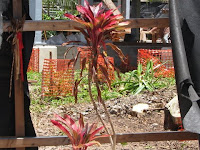 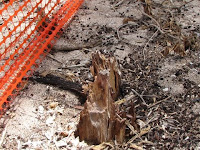 Meanwhile, even though the state still has not approved a Burial Treatment Plan for the property, you can see from this picture that the house is coming up rapidly. Kaiulani Huff's camp also is gone from the beach there. 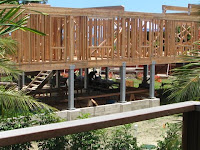 And so goes the ongoing desecration in the hood.
Posted by Joan Conrow at 8:42 AM

interesting stuff. i drove by the lot the other day. the housing density in the area was more than one might think; and that joe b lot sure is crammed in there (from the street view at least). thanks for the update

You're welcome. And we missed you in comments yesterday. :)

Just a quick thanks to Caren Diamond for all she does to protect the public interest. And thanks to you, Joan for keeping us informed. Kanalu

Joe Brescia, shame on you! Get that stupid orange fence off our beach!

Kudos to Caren for her years of hard work protecting the Aina from the desecration of greed.

"Get that stupid orange fence off our beach!"

It's not as ugly as the tent ghetto eye sore Kaiulani Huff had there.

Thanks to Caren Diamond!