It’s been a hot, and busy, week, so I was moving kind of slow when Koko and I went out walking this morning under a solid gray sky and the barest sprinkle of rain that fizzled as soon the sun appeared in a burst of yellow light.

Koko, however, got all revved up by a raucous four-way mynah beef under a mango tree that had her whining and yipping and straining hard at the leash, just itching to join the fray.

In matters like these, there is no consultation. I say no and exert sufficient pressure on the leash to get her going my way.

A similar process is under way with Joe Brescia’s burial treatment plan (BTP), which today will be considered by the Kauai-Niihau Island Burial Council.

The State Historic Preservation Division, aided by Brescia’s archeologist, Mike Dega, are attempting to exert sufficient pressure to keep things going their way, which is building atop the burials, even though the Council rejected such an approach at its Oct. 2, 2008 meeting.

A number of things are very sketchy about this process, aside from the fact that it wasn’t followed from the get-go. That resulted in a law suit and Judge Kathleen Watanabe’s September 2008 ruling that state archaeologist Nancy McMahon had improperly approved an earlier BTP without consulting the Burial Council or other groups.

The judge ordered the consultation process to be redone, and that’s where we’re at now. Unfortunately, the process is again flawed during this second go-round.

For starters, Brescia’s attorneys last week provided the Native Hawaiian Legal Corp., which brought the suit against the state, with draft 10 of a BTP to review. It was only by accident that NHLC discovered on Tuesday that there was actually an 11th draft, and that was the document the Council would be reviewing. SHPD never did send a copy of the “revised” BTP to NHLC or any Hawaiian groups. Office of Hawaiian Affairs had to request a copy, and it was given version #11, which is how NHLC found out it existed.

On Tuesday, NHLC attorney Alan Murakami asked deputy AG Randy Ishikawa to post draft 11 on the SHPD website, which was done yesterday. However, no information is provided on where comments can be directed, and the website’s contact info for the Kauai office is outdated. (FYI, you can submit to randall.k.ishikawa@hawaii.gov and Nancy.A.McMahon@hawaii.gov.) At Alan’s request, Randy also agreed to accept public comments through June 15.

Without Alan’s intervention, folks would have had to make their comments by today, without really knowing which draft was being considered, as the draft number is not noted on the Burial Council’s agenda.

It also would have been difficult for citizens to know exactly what transpired at the Council meeting where the last BTP was rejected, because minutes for that meeting still have not been posted— eight months after it was held.

Now perhaps this approach meets the SHPD’s definition of consultation. But does it reflect the spirit of the judge’s ruling?

Judge Watanabe said that the process is everything and she wanted to make it meaningful. Is it meaningful to give the Council a rehash of the BTP it already rejected, without exploring any other options? Is it meaningful to prepare a supposedly revised plan without first consulting with any Hawaiian groups or other interested parties, or even advising them that a plan had been drafted without their participation? 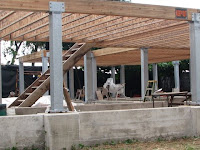 is it meaningful to be pursuing this exercise when each day, Brescia's house gets that much closer to completion?
Posted by Joan Conrow at 8:16 AM

Brescia's place is looking real good. I see he's using TJI's (truss joist I-beams) for floor support. We used them too. They can span up to 48 feet with no additional load-bearing supports, allowing for large rooms with no internal walls or pillars.

I'll bet the place will look beautiful when it's done.

i wonder what the final cost of the project will be (lot purchase, adjusted for inflation, and construction cost) vs appraised value thereafter

"It also would have been difficult for citizens to know exactly what transpired at the Council meeting where the last BTP was rejected, because minutes for that meeting still have not been posted— eight months after it was held."

I'm wondering if the Council meeting is subject to Sunshine Law requirements...

"Is it meaningful to give the Council a rehash of the BTP it already rejected?"

It's ALL rehash, from the BTP to the Council to the kanaka to the State to landowners guys. Everyone say same thing every time cause there is no direction.

It's a real shame that this house was allowed to begin consturction. After all, we Kauaians know that once an owner starts building, tearing down an illegal project almost never happens. The one good thing about this project is that the owner can't make this house into a vacation rental. On the other hand, is he the kind of person who even cares about being a good permanent resident? After being so oblivious and disrespectful of Kauai and it's people, do we actually picture him being a generous and involved community member? Does he really think he will be welcomed here with open arms after causing all this stink? Good luck Mr. Brescia.