The rain had just passed, but white clouds were still clinging to dark green mountains, where a squall released the last of its moisture, when Koko and I headed to the beach this morning.

The sun beat us there, but we were otherwise alone, unless, of course, you count the iwa soaring on the currents and the cardinals cheeping in the bushes and the pueo cruising above the treetops. I’d finished swimming and Koko had finished racing up and down the sand and we were sitting on a rock, admiring the shimmer, when a glossy monk seal rolled up in the surf, not 25 feet away.

We exchanged blinking gazes for a few minutes, and she came up farther onto the beach and then I picked up Koko and we crept away, to let her have it all to herself, but she didn’t stay long, and as I watched from the hillside above, she shimmied back into the surf and swam away.

I felt honored — blessed — to have had such an encounter, so it was with bewildered puzzlement that I read the admission of guilt by monk seal killer Charles Vidinha in today’s The Garden Island:

Vidinha admitted that he was at Pila‘a Beach on Kaua‘i’s North Shore on May 21 when he saw a Hawaiian monk seal in the shallow waters off the beach.

He used his Browning .22-caliber rifle to fire four rounds at the seal, RK06, two of which hit and killed her.

“Vidinha knew it was a Hawaiian monk seal at the time he fired his rifle at her,” the [plea] agreement states. “Vidinha subsequently destroyed the rifle that he used to commit this crime. Vidinha deeply regrets his actions and he apologizes to the entire community.”

But the story was missing the one thing that everyone interested in this issue wants to know: why?

Why, instead of feeling honored or blessed at seeing one of the world’s most endangered marine mammals, did he instead have the desire to shoot her?

Is he senile? Insane? Was he feeling bored? Impulsive? Does he regularly shoot at animals that pose him no threat and will provide him with no meat? Or was this a random act of senselessness? Did he shoot the other seal? Was it a copycat crime?

In killing that seal, Vidinha also killed her pup, which was nearly ready to be born. That’s a big loss to a rapidly dwindling population of animals that has been around for at least 13 million years, but is now disappearing, like so many others, in an environment greatly — perhaps irrevocably — altered by man.

Saying “I’m sorry” doesn’t cut it. Ninety days in jail, even for someone who is 78 years old, is pretty minor. A $25 "special assessment" — far less than you’d be charged for driving without a seat belt — is a joke. If he couldn't pay more, let him do community service.

But fines and jail time won’t bring back that seal, or make much difference in the psyche or actions of someone who engages in such bizarre, abhorrent behavior.

The least he could do is tell us why. 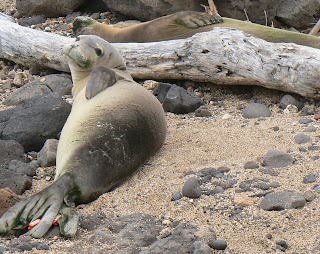 In other reports (Diana Leone's in the Advertsier and one TV station) his lawyer was quopted as sayng he wanted to scare it away so he could go fishing.

Thanks, Andy. I didn't see The Advertiser story when I first looked. Not that it really sheds any more light on the WHY? As Mimi Olry so astutely observed:

"Everybody knows you can go up to a seal and go 'Boo!' and they'll go off the beach. You don't have to use a gun."

Interesting, too, that Tiser isn't allowing comments on that story.

why such a light penalty!!?? b/ of age? senility? if so -- WHAT THE F IS THIS GUY THEN DOING WITH A FIREARM? lol

So, so horrible. But I also have to question what is your dog doing on the beach? Sure the dog enjoys it, but every place on earth that protects its beaches keeps dogs off of them, and dogs and monk seals are a terrible mix (the seal sure doesn't want the dog there). I see way too many incidents where the seals leave the beach after some encounter with a dog.

Even if he wanted to scare it a $25 fine is absolutely ridiculous. Something is not right about this.

But I also have to question what is your dog doing on the beach?

Poor RK06 they've given you a number, taken away your name, and now killed you.

Perhaps the commodification and objectification of the natural world kills the human capacity of empathy and creates an absence of the sacred. RK06 I will remember your name! You are more than just another anonymous dead monk seal.

Joan:
KITV (4) was the only TV station at Federal Court. Darryl Huff did a 90 second piece on Vidinha's version and reaction from the fed's. Gotta poke around their web site to find the video but as of Sunday afternoon it was there..could shed more light on "why"...

Perhaps the commodification and objectification of the natural world kills the human capacity of empathy and creates an absence of the sacred.

Actually, humans have been hunting animal species to extinction since long before "commodification" of anything.

joan -- i usually agree with most of what you say but this time i think you are betraying your prinicples. if this had been a "settler" or a "visitor" you would have hung him. this guy -- you seem to have "understanding" for. where is the outrage?

Thanks, I did find both the KITV video and its transcript.

In response to Anon. 6:22 PM: I have no understanding for this man, and seeing the cockamanie story he and his attorney dreamed up really pissed me off. So tune in to tomorrow's post for a bit of outrage.

"Actually, humans have been hunting animal species to extinction since long before "commodification" of anything."

Typically for eating them or using their body parts for some survival purposee (warmth, shoes, etc.) Trophy killing (sport killing) and just random slaughter seem to be more "modern" IMHO

This guy Vidinha, who was most likely allowed into the Pilaa property (and likely employed) by Jimmy Pflueger or his minions, did not need a "reason" to kill a monk seal. Feeling entitled to a Pflueger mentality ("It's my land, I'll do whatever the f#@* I like on it regardless of the consequences to others") was enough.

Funny, last time I went down to Pilaa, one local haole drove up and tried to talk us out of it. Said there was no trail (which is only half true) and some other excuse. Now that I think about it, it's probably because I was with friends in their rental car. The locals who drove down to Pilaa in their trucks (must have the keys as well) we much friendlier.