I went over to Lepeuli Beach (Larsen's) yesterday to see for myself what was happening after receiving emails that Bruce Laymon was preparing to fence off the edge of Waioli property that borders the official public access — an action that would prevent people from taking the “easy” trail down to that beach. It was a sunny, stunningly stellar day, with big surf and soaring albatrosses and sleeping monk seals and spouting whales, which likely explains why some 40 cars — at least two-thirds of them rentals — were in the parking lot of what used to be a secluded, lightly used stretch of wilderness coastline. Auwe! Anyway, posts have been erected that, if fencing is stretched between them, will indeed prevent people from walking across Waioli land after leaving the parking lot. Instead they will have to take the county access down to the beach and then walk along the sand for a bit before picking up the old dirt road — or is it an ala loa? — that Bruce no longer can fence off parallel to the shoreline since surrendering his Conservation District Use Permit. 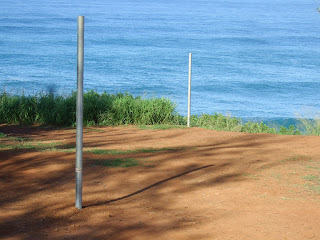 It’s not surprising that Bruce appears to be moving ahead to erect the fence at the trailhead. Back in 2000, Waioli attorney Don Wilson sent a letter asking the county to "install a fence, or place boulders, along the pedestrian pathway that begins in the parking area and continues on to the beach, in order to restrict the public's access to Waioli Corporation's adjacent property. The entire length of the road from old Kuhio Highway to the parking area overlooking the beach is fenced, but the portion of the County's property located beyond the parking area is not fenced, nor is the County-owned pathway clearly marked, and public access from the parking area to the beach is therefore not now restricted to the publicly-owned property."
It seems it would be difficult to prevent Waioli from fencing its land unless the “easy trail” is determined to be part of the traditional ala loa that once ran between Waipake and Kealia — a question that is not likely to be resolved any time soon, unless someone is willing to foot the legal bill to press it in court. While I fully trust Linda Akana Sproat’s recollection of the ala loa route, since she and her family actually walked it to access fishing and limu picking areas, I recently learned that Patricia Hanwright has hired an attorney to make the case that the ala loa runs much farther inland, well mauka of her land. The Hanwright parcel, shown here, is a key segment because it lies between the coastal trail that runs from Moloaa Bay across Thomas McCloskey’s land and the public access to Lepeuli. 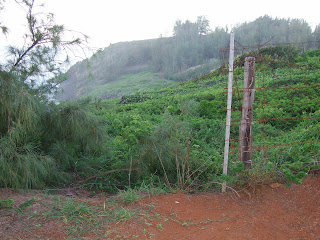 After swimming at the northern end of the beach, I was heading back when I spotted four men and two women mugging an endangered Hawaiian monk seal that I’d previously seen sleeping peacefully among the rocks. The seal’s face was covered with a net, but its eyes met mine and they conveyed terror, which left me with a sickeningly disturbed feeling that still lingers. 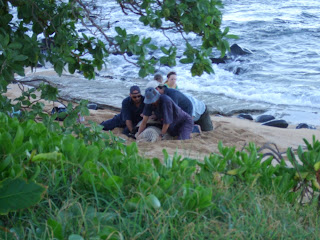 Although signs erected around a snoozing seal further down the beach warned the public to stay away, this group was allowed to conduct the equivalent of an alien abduction— taking blood and fat samples, swabbing all its orifices and gluing a radio transmitter onto its back — because they are federal scientists striving to protect the seal, or at least help us humans figure out how to do so -- provided it doesn't cause our species too much inconvenience. While I understand the NOAA and NMFS folks have the very best intentions — which, as we all know, also pave the proverbial road to hell — if you check out the Programmatic Environmental Impact Statement for studying the dwindling seal population, you really have to wonder just how much trauma will be inflicted upon these native marine mammals in an effort to “recover” them.
Some of the more controversial proposals include vaccinating the seals against diseases they don’t currently have and conducting various hazing activities — like administering electric shocks and making big noise — as part of a “behavior modification” effort aimed at “discouraging undesirable seal behavior in the Main Hawaiian Islands, such as interactions with humans or domestic animals.” No mention is made of shocking errant people or dogs that venture too close to the seals, however. Researchers also would continue to attach flipper tags, move juveniles to various locales around the Hawaiian archipelago and relocate aggressive males. It’s all designed to “promote the long-term viability of the Hawaiian monk seals in the wild” and “allow for reclassification to threatened status, and ultimately, removal from listing under the Endangered Species Act.” But while there were plenty of ideas for aggressively messing with the seals, I didn’t see anything that required humans to take any significant, sacrificial steps, like reducing commercial fishing quotas, cleaning up the ocean, slowing global warming and its associated sea level rise or halting Navy war games in the Northwestern Hawaiian Islands, the seals’ primary breeding area.
A friend who regularly messes with albatrosses — in the name of science, of course — justified her actions by saying, “We play devil so often, it’s nice to have a chance to play God.” But after witnessing the vigorous resistance of albatross and seals to our efforts to help them, I have to wonder if we really know the difference, and why we don’t devote instead significantly more efforts to altering the human behavior that is proving so deleterious to both our own survival and the wild creatures that share the planet.
Posted by Joan Conrow at 8:18 AM

I'm a tourist, I arrived on Saturday - front page of the paper on Sunday is this beach - of course I'm going to go there.

The talk of the hystrarically path made me think that there was some boyscout driven self guided walking tour like at the cave, but instead a crowded tourist ridden beach with no documented significance.

I guess the seals are like children -- we should just leave them alone, not do anything which might make them fearful like making them see a doctor or dentist, giving them vaccinations, etc.

Vaccinations for diseases the seals do not have in their eco system could cause infection of other non vaccinated seals.

> Vaccinations for diseases the seals do not have...

Do not *currently* have.

They don't vaccinate for the fun of it. They know the seals are at risk to specific diseases and that they can prevent those diseases. Vaccination is fairly routine stuff, really. E.g.:
http://www.google.com/search?sourceid=chrome&ie=UTF-8&q=seal+vaccination

Thanks for the link, Casey.

I should have been more specific and said, "Vaccinations for diseases that have not been found in Hawaiian monk seal populations. "

There is no guarantee that any vaccination will protect completely depending upon the dose, the frequency of the doses (boosters) and the health of the animals' immune system.

Diseases in animals have been spread mistakenly to other animals *not vaccinated by vaccinated animals who shed the virus into the environment.

"Diseases in animals have been spread mistakenly to other animals *not vaccinated by vaccinated animals who shed the virus into the environment."

Vaccinations are made up of viruses, disease, thimerasol(mercury as preservative) and lots of nasty stuff. They are specific in causing an immune response that may protect , or endanger. It's sick to inject them with crap that they do not need, you have no idea what kind of immune response a seal will have Next thing you know , we'll be having autistic seals

Mentioning autism kills any credibility you might have had.

Documents have emerged today proving the innocence of Dr Andrew Wakefield, the vaccine / autism researcher who has been falsely accused by the British Medical Journal of "fabricating" the study data he published in 1998.

The documents, just made public yesterday, reveal that other researchers replicated his results independently and with documentation, 14 months before Dr Wakefield published his own work.

We have the full story and the links to these documents that now shatter the BMJ's false reporting and blatantly dishonest misrepresentation of the facts:
http://www.naturalnews.com/031116_Dr_Andrew_Wakefield_British_Medical_Journal.html


Dr Wakefield is now demanding a retraction from the British Medical Journal. Will the BMJ issue one? Unlikely, given that this whole thing has been a political witch hunt to begin with and never had anything to do with scientific truth from the very beginning!


It's not just the BMJ that's spouting lies, by the way. It turns out that much of modern medical "science" is technically and scientifically speaking just pure hokum and quackery. Get the facts on the fraud of modern medicine:
http://www.naturalnews.com/031121_medical_research_fraud.html

I suppose that's why Wakefield retracted the paper supposedly showing this connection?

You know, I've wondered why this autism/vaccination issue is still talked about despite so much work showing no connection. I figured someone must be making money off of the fear it generates. Now I know: its "Natural News"!

Natural news is a free newsletter, Casie, why do you think kids bang their head against the wall, wail and scream and sometimes are just never the same after that vaccination? In the past kids were given a few vaccinations, today the average 2 year old has had some 33 shots. Why the increase in autism? Just line those kids up for their herd immunity.

The number of vaccines given young children these days is crazy. As a young mother I took my children to the pediatrician and like a good mother was suppose to, made sure they received all their vaccines. Taking my 17 year old daughter in for a sports physical this year I am given a list of 5 more additional vaccines they want to give her now. This time I hesitate and question the necessity. I worry for my grandchildren whose small bodies are subjected to quantities of vaccines that seem a bit too much. I trust the experience of mothers who witness a direct correlation between the vaccines and onset of symptoms regardless of what studies prove. As mothers we need to trust our instincts as history has shown how years down the road, we learn of unknown or unproven side affects from drugs previously deemed "safe".

What is the next step in stopping Laymon from building his fence?

"Vaccines have increased. Autism has increased. Therefore vaccines cause autism."

Sad that's what passes for critical thinking these days.

Trusting the pharmaceutical companies and the FDA to protect the public reflects a lack of "critical thinking". Again look back over the course of history and you will find many instances where the medical establishment has erred at the expense of public health.

As a mother, I'm not willing to sacrifice my child in the name of "good science". If many mothers see a correlation between the onset of autism symptoms following vaccinations than I would certainly question the safety of those vaccines and not unquestioningly vaccinate because I'm told to.

You realize your just being a willing dupe for this capitalist British doctor who is trying to scam the world for his own economic gain, don't you?

You might as well blame gerber baby food. Or disposable diapers.