It's definitely getting light earlier, which is making our morning walk on a narrow road less perilous, and this pre-dawn it was especially bright, with a bigger-than-half moon illuminating the cloud cover and the air so heavy and calm that I could have stood much longer, enjoying the fragrance of my neighbor's puakenikeni tree. But the dogs had other ideas, so we kept moving.

The folks living in Koloa Camp staged a sign-holding event yesterday afternoon intended to make it clear they don't want to move. (Hey, nice to see Councilman KipuKai Kualii in the group!) They're still holding out hope Grove Farm will let them buy their camp houses, and in the process preserve a slice of Kauai history. 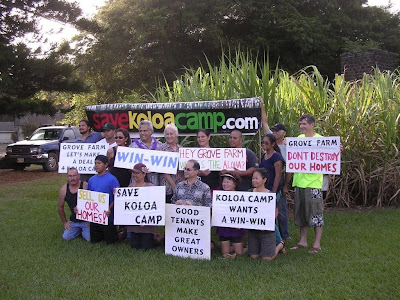 Because that's what visitors want now: history and culture. Or so says George Costa, the county's director of Economic Development, in an interview that makes it clear the county has neither plans nor ideas for diversifying our economy. Instead, we hear the same tired mantra that's been trotted out forever: gotta keep supporting tourism and then we'll work on diversification.

Just like FEMA doesn't have blankets and food, the county doesn't have a plan for life after tourism, or even life other than tourism. We're on our own.

It made me think of an anguished call from a friend who expressed doubt that Kauai will be able to make it economically in the long haul. Hey, chillax, that's in the future! We don't go there on the Garden Island. Everything's fine! Well, so long as oil remains relatively cheap.

In the meantime, George thinks there's room for more shops selling tourist trinkets, and restaurants that will open and then close before you can find a parking space. Oh, and don't forget the thriving growth industry of massage therapists.

Or, he suggests, we can exploit our kupuna, one group that hasn't been thoroughly wrung dry by the visitor industry's insatiable need for something new to satisfy the jaded “been there, done that” crowd.

At least we aren't likely to see construction begin on the resorts that the planning commission approved, even though they weren't needed. That's because hotel occupancy is only at 60 percent, catering to just 22 percent of the visitors. The rest are going to time shares (28 percent) and vacation rentals (25 percent).

So where are the remaining 25 percent staying? Kalalau? Perhaps that explains why 37 hikers had to be rescued at Hanakapiai one afternoon last week. Yes, I know, that used to be a wilderness area — before the trail was “improved” to allow easy access for all our nature-loving, but ill-prepared, tourists.

Still, ya gotta give George credit for a sense of humor. I'm talking about his comment on the importance of “networking.” So true that, especially if you want to be appointed to one of those high-paying jobs in the mayor's administration.

He did briefly mention agriculture, with the long-stalled papaya industry one supposed bright spot. I think a comment left on last Tuesday's post more accurately summarizes the reality of the situation:

The County's efforts to preserve ag land are appalling. We have encouraged mansions, resorts, commercial tours and every non-ag endeavor on ag land. It doesn't matter who the mayor is because it occurred during Kunimura, Yukimura, Kusaka, Baptiste and Carvalho's administrations. So politicians, quit paying lip service to the politically correct but factually incorrect assertion that you want to preserve ag land because you don't. Admit that you are controlled by the realtors, contractors and aina rapists that line your campaign coffers and stroke your fragile egos.

Copies of the planners report, agency comments, and the actual permit with conditions issued are not posted. We get to beg for them and pay for paper copies.

Really. Why isn't this stuff posted on-line so citizens can review applications and submit comments without having to drive into Lihue, stand at the planning counter and paw through a stack of documents?

And since the planning department only operates on an enforcement basis, it seems this information should be readily available to the public. Otherwise, how are people supposed to know if someone's in compliance if they don't know what conditions were imposed?

Of course, such a system works great if you don't really want to encourage citizen participation and have no interest in doing any enforcement

And finally, I meant to respond some time ago to a comment inquiring about a more sustainable approach to feeding chickens.

At the workshop I attended, Sky Roversi-Deal discussed a chicken diet that is one-third greens; one-third fallen fruit and cooked starchy root crops, such as cassava, sweet potato or taro; and one-third protein, such as blood worms, army worms, fish scraps, soldier fly grubs, bugs, centipedes, etc. If you can't come up with sufficient protein, or your birds are not allowed to scratch up their own by going free range, you can substitute layer crumbles for all or part of that final one-third.

The cool thing is, you can produce most all of what they eat, because a lot of it's the same stuff you eat, in your own backyard.
Posted by Joan Conrow at 9:20 AM

"especially if you want to be appointed to one of those high-paying jobs in the mayor's administration."

that you aren't qualified for. what do george (and before him mayor beth) know about economic dev?

Coffee's relationship to addiction, anyone?

So then, what is the answer?

Tourism is here to stay and without out it, what would happen to this island?

I do not mind the tourism, I mind the lack of respect from tourists, but that is not the Kauaiian government's problem.

Did we not learn from Hurricane Iniki??? We cannot put all of our eggs in one basket.

Tourism is good for the economy but to we must diversify Kauai's productivity. Our county government is full of frauds, just like the Kauai food bank employees that stole funds and food.

Photovoltaic systems should be developed to produce electricity in neigborhoods. We need to end the monopoly of KIUC and their Communist mentality.

Farms of all sizes that produce food for the people of Kauai, should be given incentive based credits.
Gentleman fraudulent TVR's on AG lands should be taxed double the rates and put a cease and desist order on any new appllicants.

No vision, no thinking outside the box, in fact not even any reflection on how the Kanaka Maoli lived sustainably without imports and what principles can be applied today. Its a refection of how we adopted values and economics not suitable for a group of islands, the most isolated in the world. Economics that will fail us as oil prices skyrocket. This is already happening in the cost of goods. Food prices are out of control. I use to be able to stock up, but now I can only buy what I need on a weekly basis, if even that. The only way out of this is growing food locally but it also means changing our mentality of excessive consumerism and simplifying our lifestyles, changes that don't come easy.

Regarding the 37 tourists who required the services of our rescue personnel, when will we start charging fees to those who stupidly put themselves in harms way?

Thinking outside the box is not something taught to the "plantation mentality". I am surprised the politicians have not pushed a gambling boat, strip clubs, and legalizing pot and selling it to the tourists to increase revenue and create more jobs.

How about at least cleaning the bathrooms for all the tourist traffic and local people who use th3e parks?

Its not what you know its who you know if you want to get elected on this island......so far...blame the same OGB's.

Yes, saddle George Costa with the obligation to replace tourism. After that, send him to the Middle East to broker a peace deal between the Israelis and everyone else in the region. As for out of the box ideas, I kind of like legalizing weed for tourists only (accompanied by locally grown junk food). We could probably get them to ride Merry Prankster buses because they wouldn't want to drive, thereby taking cars off the road. Kauai Electric Bus tours!

What's pathetic is that George and most of our government officials have lived thru 2 hurricanes, airline strikes, 9-11, escalating oil prices affecting airfares, tsunami in Japan etc and haven't learned the lessons these events should've taught us. Instead millions get funneled to stop the bleeding and market our asses to death. Meanwhile, hotel workers get hours cut or laid off and suffer the yearly volatile ups and downs of this industry that are inevitable.

Let's not forget the cost that mass tourism impacts on locals, the 'aina, and Kanaka Maoli. Quality of life suffers, access denied, natural resources diminished, over development of our wild places, beaches, all in its name.

Let's put more than lip service to diversified ag and I'm not talking about mono-crop ag or gmo papaya farms. Put resources into growing our taro industry where kanaka don't need to pay $7 for a bag of watered down poi that gets manufactured in Honolulu.

If we don't dare to think it or talk about it we get the same old same old with the same tired results.

It's going to take an economic disruption of global proportions to get us off tourism. Ain't nothing else out there to bring in that kind of money to Hawaii and let's face it, we're hooked.