Just when you think a problem is solved reasonably and equitably — in this case, the re-opening of the closed public access at the former Hanalei Plantation Resort, whose proper place name is Kauakahiunu— it turns out it's not.

To back up just a minute, I first wrote about Lance Laney's encounter with three cops who threatened to arrest him for using that easement. Then I wrote about how Michelle Swartman, who represents the landowner, billionaire Pierre Omidyar, acknowledged that the easement does indeed exist, and that pedestrian access is allowed.

Well, Michelle finally got around to calling Lance personally to apologize, confirm the access and otherwise ho`omalimali. “You would have thought we went to high school together,” Lance recalled.

She also suggested that perhaps he'd like to join the little cadre of residents helping Omidyar achieve his vision of an “eco-resort” — and some 34 mansions — on the bluff overlooking Hanalei Bay. Seems another group of citizens is simultaneously working to oppose the uber-luxe project in its entirety.

Lance wasn't interested in joining her group. “I just want to go fishing,” he said. But when he went to use the access this past weekend, parking where he usually does by the still-locked gate, he returned to find a warning citation issued by Princeville Corp. It read: “You have beach access only. No parking. You will be towed.”

The citation, undated and unsigned, was left only on Lance's vehicle. A moped that was parked at the gate when he got there was not given a similar notice. Not a single sign indicated it was a no-parking zone.

Lance called Princeville Corp. four times to ask what was up, but no one returned his call.  So he reached out to his new BFF, Michelle, who feigned total ignorance of any parking issues associated with the access.

“She knows, of course,” Lance said. “She told me she's in charge of anything that happens with the [Omidyar] land on this island, so she's gotta know about this. I'm totally convinced this is a big end-run to keep people from using that access.”

Lance next reached out to Carl Imparato of the Hanalei-Haena Community Assn. Carl told him that Omidyar owns Hanalei Plantation Road all the way to the police station, which Lance estimates to be about a mile from the access gate. "I think the county was really negligent when they let that happen," Lance said.

Meanwhile, a friend who was working up in the area checked out the access and sent me these pictures, with the question: “how can they put a locked gate across a 20-foot-wide public easement?” 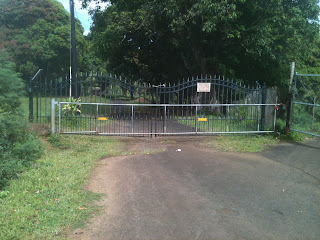 The public uses that little track through the grass to the left of the gate.

At the other end, coming up from the beach, the “access” is even more inhospitable — and dangerous. Folks have to walk 15 feet to the left of the locked gate to clamber through the brush and over the pushed down fence. 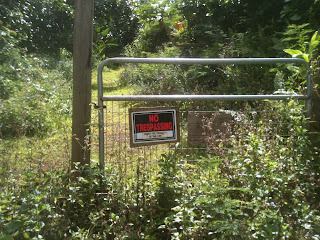 As you can see from the approach to the gate, there's ample room for roadside parking — and nary a “no parking” sign to be seen. 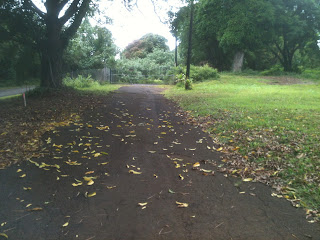 Another friend who recently walked the easement said she and her friends parked near the houses on Hanalei Plantation Road. They encountered no security guard. As an interesting aside, one of the properties on the mauka side of the road is listed for $14 million, which gives you an idea of the hefty price tags those planned rim-side lots might carry.

I also learned that the access has been blocked for the entire 4.5 years that Omidyar has owned the property, in apparent violation of the 1984 grant of easement to the County that states: The Grantor and its successors and assigns shall "maintain and keep in good repair said pedestrian pathway easement."

I sent Planning Director Mike Dahilig emails on June 7, 13 and 21, asking about the status of that easement, and what recourse the public has when an easement is blocked. He said on June 8 that he would get back to me, but so far, nothing yet.

Additionally, I learned that on March 23, the Hanalei Bay Coalition sent Omidyar and his wife a letter, expressing concerns about the project and most especially the closed beach access:

We have been shut out by a gate and a sign that calls us trespassers on our own land. Over the course of six months of community meetings conducted by your organization’s development agents, not once has this deeded access been publicly acknowledged.

The Coalition got this reply:

"Thank you for your letter. We appreciate the care and concern you have for Hanalei. We share it as well. We are aware of all the concerns you raise. Our team is working diligently to design a project that will be good for the environment, for the community and for the economy. Please communicate directly with Eric Crispin [the leader of the project development group] if you have further questions."

When the Coalition responded that the project development group was blowing them off, it got this final rely from Omidyar's people:

"We appreciate your concern. We continue to believe that the best way of resolving issues regarding the property is through the team led by Eric [Crispin]. The issue of public access is not as simple as it appears. Please speak with Eric about this."
Though the legalities may be complex, the moral issue is quite simple.
“It just shows the mind set of the property owner,” Lance said. “The people who are going to build up there don't want us around, anyway, so they don't care what the community thinks. It would be very simple for this guy to be a neighbor. He doesn't have to be a jackass.”


As for Lance, well, after two ruined fishing trips, and facing the prospect of a long walk or expensive tow, he's lost enthusiasm.
“I think they pretty much beat me," he said. "When you look at how much money this guy has, well, David won once, but Goliath usually ends up swallowing all the little guys. Now I gotta find a new place to go fishing.”
Posted by Joan Conrow at 9:48 AM

This totally sucks. If you want to build a resort why would you start by turning community against you??? Unless you don't care?

Dont let them beat you.

As a mainlander who owns property in Kauai and reads the Garden Island and this blog consistently, I am staring to see that the local goverment of Kauai is more concerned with protecting the wealthy than protecting the land.

It is and should be the local government's duty to its citizens to produce a total island easement map and then make sure the easements are not being adversely possesed or adulterated in anyway.

Who else is going to do it.

Thank you for covering this Joan. Keep shining the light on this!

Do you know where Mike Dahilig got fired from and how he got the planning commission job.

This County of Kauai is out of control, it's like going against the Mexican Cartels and their corrupt government officials.

Fast and Furious AG Holder needs to arm the citizens of Kauai.

This is how the developers work, they try to turn the locals against each other and the county just goes along.

Thanks for covering this Joan! Kauai should not be the sole playground of billionaires. This angers all local people and is arrogant. I'd like to kick them off the island.

Where is Tommy Noyes and Ben Wellborn on this? Or do they only care about North Shore access if they can make money by turning it into a path?

It's the 1%'s world: we just try to live in it. And when will the cops/politicians wake up to the fact that they don't mean a thing to their owners? Once enforcement is gone, no more 1%!

And this is how they work it...until locals (Lance) give up in frustration. They have achieved their goal, an exclusive community for the wealthy and those pesky locals kept at a comfortable distance. You titled todays post on the money! BEAT IT is exactly the message that is being sent to the community, make no bones about it. Public resources used for subsistence/recreation for generations, now the sole enjoyment of offshore owners and the 1% that can afford to stay there. But this is merely one of many instances of stealing public access. Its epidemic mauka to makai. When are we going to get pissed off enough to do something about it?

The equally anti-public Waioli Corporation had a proposed albatross sanctuary approved in May by planning. A two acre enclosed square area will be placed directly on top of the ala loa lateral coastal trail illegally closed with fencing last year by Bruce Laymon. A second set of fence will run across the trail.

This is not the ʻwayʻ: "We continue to believe that the best way of resolving issues regarding the property is through the team led by Eric [Crispin]."

The ʻwayʻ is to file charges at the prosecutorʻs office.
And fines/penalties should be levied per day.

Pasion is not doing his job.
He is supposed to oversee all conditions of developments and make sure they are in compliance. Heʻs had approximately 3 years to accomplish this and it WAS one of his big hot air promises when he went into that position.

So I call you out, Pasion. Are you just sucking salary?

Yea, I know about his position.
I have called him about the 15 ft. berms at Kealia Kai blocking the viewplane (the whole stretch of ocean we used to enjoy has been closed for the privacy aspect of selling lots.

One of the conditions of Kealia Kai that the one ft. berm that was there was to be REMOVED. Theyʻve added to it to make it 15 and 20 ft. in some areas.

Most county of Kauai civil servants are incompetent, just look at Jerome the Shadow Freitas TGI reports. This guy is retired and still does more work than these over paid fools.

The salary commission should hire an outside organization to review the jobs performances of our county workers. Lets rid Kauai of fraud, waste, and abuse from nepotism.

File IRS audit investigations and follow the paper trail, these guys are being rewarded handsomely.

Shay and Jake can HELP you with fines and penalties, you just have to donate to their POHAKU program.

third pic is a view from the easement inside the gate toward the road beyond.

request for informationn to the planning department regarding the meetings previously held with the owner of that particular north shore property. Our interim planning director went to Oahu to meet with them, on our dime. It is also included in the TAU count as they already HAVE one part of their zoning permit already.

Incompetent, is the only word for the Kauai Planning Department.

isn't there case law that requires parking when beach access is acquired, otherwise, it isn't accessible?

Your Dad's girlfriend is not quailified nor capable of tying her own shoes.

In response to Anon. 9:46 AM, I checked with Planning Director Mike Dahilig and he replied:

I do not make County travel arrangements to Honolulu to meet with applicants seeking departmental or commission approval on permit applications. They come to us.

He didn't make "county" arrangements then it was paid for by tax payers under the heading UH business.

Did he deny meeting with them?