I don't know attorney Lawrence McCreery, and I don't know if actually did lick his client's ear. But I do know that it was highly improper for per diem District Court Judge Frank Rothschild to say, when finding McCreery guilty of harassment, “Quite frankly, these are the actions of a dirty old man.”

Especially since McCreery is planning an appeal. Especially since the county Office of the Prosecuting Attorney issued a press release that included the quote, which was re-printed verbatim in The Garden Island. And especially because this is a small island, where remarks like that tend to reverberate.

It wouldn't be the first time Frank has behaved inappropriately on the bench. I detailed his wrong-doings in an article I wrote for Honolulu Weekly about Hanalei Poi evicting Hawaiians from their taro farm on behalf of landowner Gaylord Wilcox. Frank actually apologized to Gaylord for having to come over from Honolulu to testify in court, and upon announcing his verdict, lectured the Hawaiians about wasting the time of these good businessmen.

After the article came out, Frank got a call from then-Chief Justice Ronald Moon, wondering what the hell was going on over here. This prompted Frank to make one of those “how dare you” phone calls to me. In the course of our heated conversation, Frank admitted he'd never actually read the court file before hearing the case, and so knew nothing about how the good businessmen had been wasting the Hawaiians' time for the past year.

What kind of judge hears a case and renders a decision without reading the fricking file?

As for the OPA issuing that press release, one has to wonder whether McCreery is on Prosecutor Shaylene Iseri-Carvalho's growing list of hated attorneys, or if it was another self-promoting plug for her “no crime against a woman shall go untried” campaign. Which would be laudable if she herself weren't victimizing women, as evidenced by at least two successful EEOC claims that former female employees filed against her.

Meanwhile, I suppose it was inevitable, given the gargantuan houses that have been built up there, but the boats that anchor in Hanalei Bay each summer — adding their sewage to the already high bacterial count — are getting similarly super-sized. 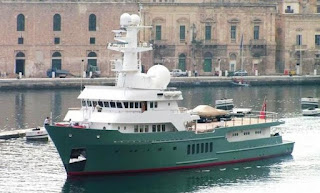 The 160-foot charter superyacht Karima, which can accommodate 12 passengers and 14 crew, has been moored in Hanalei Bay for nearly two weeks, according to Makaala Kaaumoana of the Hanalei Watershed Hui. In a July 13 email sent to state and county officials, Makaala notes:

It is not in the mooring area. It has a helicopter on board that is flying all over Hanalei. It has a large launch it uses to come ashore outside of the ingress/egress areas. This is very disrespectful behavior and a potentially dangerous precedent, floating hotel? Several years ago, DOBOR told a small cruise ship they could not come into Hanalei. We do not see the distinction. Please support our community guidances and rules.

Yesterday, the yachters reportedly passed out fish to people at the beach park after catching more than they could handle. You know, trickle down, subsistence style.
Posted by Joan Conrow at 4:02 PM

Joan - please elaborate - did they have a state mooring permit? Did they receive permission to fly and land their helicopter?

I just figured it's Rothschild taking out a competitor for young divorcees.

I read the comment, and thought it was right on. Isn't it true?

They do have a mooring permit from DOBOR. It's not clear whether they are in the mooring area. Ground helicopter landings are not allowed on the North Shore, but the water and boat are in state jurisdiction. Makaala says she sent DOBOR the guidance about respecting noise sensitivities in Hanalei Bay. It is not an ordinance or regulation, but she says all other aircraft honor it.

Sorry I did not see that you indicated that they have a state permit...too bad they didn't indicated their proposed uses, for example, helicopter landings when they made and received the state permit.

Nor the disrespect they have imposed on the community.

May 25,2012 Kauai Prosecutor Under Investigation

A source inside the KPD told me the investigation by the police commission against Quebilan, Ahser, and Perry was complete and the accusations by Abiatello-Higa was confirmed.

No mention of this in local paper and no action taken- one of many Cover Ups!

That is a very, very cool boat!!

Wish I could afford it.

how do can possibly paint "OPA convicts attorney of harassment" in a negative light?

It's not so much the conviction, it's the Garden Island's printing a press release (one of a seemingly endless supply pumped out by the Prosecutor's p.r. elf).

The Court, not the OPA, convicted the guy.

My dog likes to lick ears too but I broke him of that habit. It sounds more like a perv than a dirty old man.

You prefer that The OPA lie and hide information from the public? shameyou. Too funny!

A mooring permit and a helicopter landing use permit even if it is landing on a boat may require a seperate permit.

So RICO or plain ignorance?

How do you get a county job? Must not have to be qualified in a field of expertise, see buliding & planning departments hires in the past year.

Must just have to be the right color.

Oh No! Now we need an ear licking law.

OPA is hiding something. Maybe Shay can explain why the judge kicked her first deputy off the Bynum case or her outrageous travel budget or where the Pohaku money went.

The ear licking case is an interesting example of the rampant sexism on this island.

So rampant that two the past four mayors were women, the prosecutor is a woman, one our judges is a woman, many of our principals are women, etc.

why so MANY EEOC cases?

why do you think? How many department heads OTHER THAN his campaign manager and Celia are there? YEAH GET A CLUE.

Won't claim enlightenment on the part of county government. I think Kauai in general has strong women role models.

Actually Rothschild may be kind of a letch himself or a member of the swappers club.

really? shaymeline is such a great example...

Why do you think there are so many EEOC complaints?

As earlier stated, won't claim enlightenment on the part of the county.

Judge Rothchild is a down to earth gentle man. He called it like it seems, and i give him credit for saying so.