Musings: On This and That

A celestial stack up in a starry black sky had me mesmerized and looking up this morning, at the shimmery constellation of Pleiades (Makalii), and beneath it, Triangle pointing south, its “greater than” side touching Venus, and below her, Jupiter, enveloped in a tiny cloud that created the appearance of a halo.


Then all that turned into this: 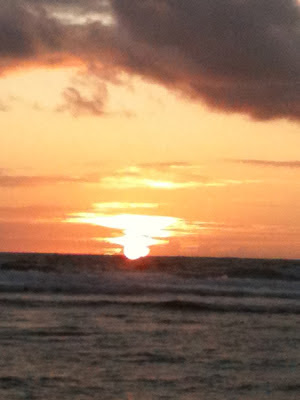 I've been thinking lately of how the state turns a blind eye to some stuff, while cracking down hard on something else.

Take, for instance, DLNR's vow to strictly enforce the rules at Polihale: no dogs, camping or fires on the beach. And no fun, either. Yet the Navy is allowed to steal five miles of that public beach to do whatevahs, and all around Hawaii, coastal landowners merrily plant their vegetation on the sand, which not only blocks access, but contributes to erosion.

Then there is the persecution of Ikaika Pratt, with the Hawaii Supreme Court ruling that the state’s interest in managing parkland overrode his right to practice his traditional religion. So DOCARE officers actually helicoptered his butt out of the Valley and he spent 26 days in jail awaiting a hearing.

Yet a friend who recently returned from Kalalau informed me there are about 15 permanent residents in the Valley, another 10 or so who live there intermittently and a dozen who regularly rotate through for extended periods, some from other islands. They've cultivated extensive gardens, and even set up a bee hive. Plus, daily boat trips shuttle folks to and from Hanalei and Kalalau Beach, which I thought was illegal. So if the DOCARE can bust Ikaika, how come all the others get a free pass?

Is it any wonder that folks think DLNR is a fricking politicized joke?

And I wonder, is the joke on Mike Sheehan, whose long-standing claim about the legality of his unpermitted boat yard has finally been usurped by the county's condemnation of his property? Or is it on us, for paying nearly $6 million for 2.29 acres of land that is frequently flooded so we can accommodate ever more tourists from Princeville's endless expansion?

Or maybe it's just Sheehan who is the joke, making comments like “we don't want it to turn it into a zoo,” after he's done precisely that, “I’m trying to lead by example here,” which is a wildly scary thought, and my favorite, “It’s not about money.” Well, then, Mike, why don't you dedicate the land, or at least cut us a deal?

As for cutting deals, how many times must we watch developers try to wriggle out of their commitments? Most recently, it's HSC Holdings, LLC, which wants to build only 42 employee housing units, as opposed to the 100 that were required under approvals granted 20 years ago to expand Princeville Shopping Center. Certainly now, even more than two decades ago, such housing is desperately needed on the North Shore.

And how is it that permits can remain good for 20 years? Isn't there a use it or lose it clause?


Speaking of which, I hear another sucker — a Japanese company, this time — has purchased the dilapidated Coco Palms, which is about to celebrate the 20th anniversary of its destruction. Can't the county order that eyesore leveled? Aren't such derelict buildings considered a public nuisance?

Finally, if you're interested in sovereignty issues, check out my article in Honolulu Weekly on the launch of the Native Hawaiian Roll. While the Roll registry is open only to Hawaiians, the campaign includes a petition that anyone can sign if they support the inherent sovereignty of Native Hawaiians. That may ultimately prove more interesting than the enrollment process, which is clearly Abercrombie's baby. As I report:

Though some Hawaiian nationals have dismissed the roll process as a tool of the state, [Commissioner Na`alehu] Anthony is encouraging them to participate. “It’s not our job to make a government,” he says, noting that the Commission will dissolve once the roll is published. “Independence, federal recognition, state recognition–all of these things are up for discussion. But we’ve got to know who is in the pool [in order] to have a discussion.” However, the press release distributed by Abercrombie’s office says the process “will eventually lead to federal recognition of Native Hawaiians.” OHA officials on hand for the launch also seemed to think that federal recognition was the goal, and that it was attainable.

Shoots, the guv could've at least let the kanaka maoli do their own launch, without him being the big cheese at the party.
Posted by Joan Conrow at 9:11 AM

Terry Lilley was illegally living on the property. They told Mike 10 days ago to clear out but he did not tell his squatters?

I hope they bust those squatters in Kalalau and the boaters who shuttle those too wimpy to hike in and carry their supplies. Kalalau is worse than a zoo because a zoo has keepers to pick up the shit and tend to the animals.

You can't have affordable housing built within Princeville. It will ruin their marketing plan and might lead to an integrated community.

In any city state or county in the Union, Coco Palms would have been leveled long ago as a nuisance, hazard and danger.

It stands as a testimonial of the inefficiency of government or at least as an example of the local government cow towing to big money.

Not even big money. The Coco Palms owners can't come up with the bucks to develop the property. Maybe they're waiting for the water to cross the highway and wash the structures away.

A very real possibility...the ocean is almost lapping at the doorstep. So much for the concrete path. Good riddance!!!!!!

........... The new fire department has low land areas on both sides,the idea to build it there was really a bad one , salt air from the trades are already eating everything up, it's built on a node in a flood zone..... heck ,our wailua bridge is built on an old foundation, plus it's wide on the top narrow on the bottom (??)really top heavy, when it goes,( things built like that) it's usually "all" at one time... lihi bridge is built on another old foundation,thats starting to crack and fall,.(go see it ) kapaa canal bridge, another one! same thing ,......it's sad that our county approves this stuff...amazing....none of them have good foundations....in fact families are built on solid foundations.........country of kauai ,.."come on man !"

Kuhio Highway and all its bridges were built and are maintained by the state not the county. State no mo money and neither do the Feds. Get your boat ready! I going shuttle people across Wailua River. Only cheap. $2 for adults, $1 for kids under 12. Seniors free.

I forgot the carry on baggage charge. Only $5 per parcel.

Thank you, Joan, for again lifting the blanket off so many damn things. It seems all your columns are chock full of NEW atrocities. How can that be?
And you just clearly and simply ask the right questions.

Does everyone know that if you call the Fire Department and request an inspection, they must go in and inspect? Coco Palms is a fire hazard and it needs an inspection.

As well Kahili Mountain Park Cabins are fires just a spark away. They were informed about the danger and dissed it off. You pick it: wiring, only one door (no other exit)

But I donʻt really understand why thereʻs no report from the Fire Department or status (like we really need one). But these idiots on the council and commission will certainly want an update...yes, council it is a little worse than it was 10 years ago.
The owner should have been called in on blatant violations by now. Rack up the fines like the thrownet fisherman gets for merely catching fish but filing a catch report 2-3 late because he no more secretary.

So, I would venture to say Pasion is another bag of hot air. PAID to follow up on conditions set by the Planning Commission to make sure they are compliant. But, oh , wait, nothings been reported so all these developers must be in compliance.

Regarding Pasion NOT DOING HIS JOB.

I agree. Iʻve been complaining about those viewplane-blocking berms at Kealia Kai to the county.

There was a complete view of the ocean for that whole stretch of highway several years back.

Kealia Kai was told by Planning Commission that the one foot berm (at the time) MUST COME DOWN.

They built it to sell privacy and an exclusive oceanfront.

They took our viewplane to sell their lots.

Well then this is a CALL-OUT to Ernie Pasion.
Anyone reading Joanʻs blog today that knows him, we want to now why heʻs getting a salary.

Kauai is not apart of America so rules and laws don't apply here. There's nothing to see, move right along, we got this in control, we've been doing this since the 1900's.

Since Capt. Crook showed up all those years ago.

The native Hawaiian roll call is a trick: they need to get a certain percentage of the Hawaiian population to sign on so they can claim "government of their own choosing".

It is deceptive as hell and many Hawaiians have no idea what they are selling out their signature to.

Does this mean the ʻstateʻ of HAWAII does not know how many Hawaiians there are?