Spent yesterday hiking the kick-butt Kukui Trail in and out of Waimea Canyon. I'd always wanted to check out the floor of the canyon I'd looked into so many times, and I finally got the chance, motivated by a story assignment. It's so spectacularly beautiful and peaceful — in between the near-constant helicopter traffic. 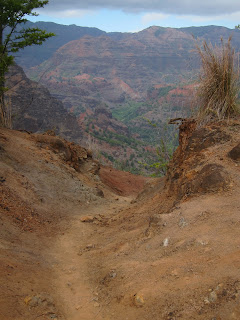 Along with albezia and guinea grass, choppers are the scourge of Kauai. Surely they're a factor in the decline of native birds. So how come those guys have never had to do an EIS on the tremendous impact of their industry? Speaking of which, I'm glad to see Earthjustice is mounting a legal challenge to the commercial aquarium fish industry. The number of marine animals it's been collecting from the wild is insane.

I recall that Councilman KipuKai Kualii sponsored the County Council resolution calling for the Legislature to impose a statewide ban on the industry. KipuKai has been on the right side of so many issues. I can only hope that when he is re-elected, he shifts his alliance from the dark side — Mel Rapozo — to the light. Cause sorry, Mel, but you squandered all the points you earned opposing TVRs on ag land by functioning as the self-appointed, self-serving champion of Prosecutor Shaylene Iseri-Carvalho.

Anyway, it was really great yesterday to get totally away from the computer, smart phone, politics. And then I came down off the mountain, down off my cloud, and saw Justin Kollar holding sign in Waimea, catching the surprisingly heavy PMRF pau hana traffic.

I just published an article in Honolulu Weekly about a key race on Oahu — Keiko Bonk, a Green, is challenging longtime Speaker of the House Calvin Say, a Democrat. Keiko opposes the Public Land Development Corp., while Say is a proponent. When I asked Say what he thought about calls for repealing the PLDC, he replied, in part:

My first preference is to maintain the PLDC law unamended for now. The PLDC has not yet adopted administrative rules or the public land optimization strategic plan as required by the law. It has not yet proposed any specific project. Thus, I feel that call for the repeal or amendment of the PLDC law is premature.
For now, the PLDC should be given an opportunity to operate and prove its worth. At the least, the PLDC should be given the opportunity to adopt its rules and prepare its strategic plan.

Opponents have been very vocal against the broad exemption authority granted to the PLDC (which does not include an exemption from the environmental review process or special management area law). I am confident that the PLDC has taken notice of the opposition and, consequently, will not abuse the exemption authority. I believe the PLDC will be sensitive to public sentiment.

The race is important because Sen. President Shan Tsutsui plans to introduce one bill calling for the repeal of Act 55, which created the PLDC, and another for amendments to the law. If Say is re-elected and opts to hold the bills, they'll never even get a hearing. But a Bonk win could be the wild card that changes the long-standing dynamics of power-brokering in the Lege.

Who knows? Maybe we'll see a few surprises this election. Let's just hope one of them isn't a Romney-Ryan victory.

Which is why I just have to share this video, as it underscores how much is at stake for women in this election. It actually made me cry to think women are still fighting for the right to control our own bodies. As they say in the video, “We will not go backwards.”

And finally, Shaylene and Justin will be answering questions on KKCR from 4 to 6 p.m. today, with hosts Jimmy Trujillo and Felicia Alongi-Cowden. You can tune it at 91.9 or listen live on-line. It coincides with the station's pledge drive, so it's a great chance to kick down a donation to this worthy community organization, too.
Posted by Joan Conrow at 8:44 AM

"I am confident that the PLDC has taken notice of the opposition and, consequently, will not abuse the exemption authority."
Hahahahahahahahahaha

Noticed Dickies two main supporters on the video he has been running on tv are Marcus Oshiro and Laurie Yoshida. Marcus is House Finance Chair, Calvin Say's right hand hatchet man and responsible for the "less than two hours public notice" given the public on the pldc hearing. Laurie is Linda Lingles former right hand woman on Kauai. Go figure.

Joan, on another front......have you seen that Jake has hit the airwaves with a show on Channel 54 (Ho’ike) called "Where is the rice cooker?"....with pictures that he claims is Tim's illegal kitchen. I wonder if he taped this porgram during county time!

So where is the rice cooker?

Next to the troll.

I'm sorry but both KipuKai and Mel need to go. They are both self serving, arrogant and sassy, and do not lead by example. They are rude and very unbecoming of elected officials. They are great and finding problems which is by the way very easy. But never do they offer any solutions. We depend on. Leaders wether right or wrong, to at least offer solutions to problems. They only offer problems and when others offer solutions they try to find the problems in that.

I don't know what station you watching, but Mel is the person that has the problem, and think that he is her "knight in shinning armor". You should tell Shaylene's husband that when he leaves a message for "Pat" make sure he is leaving the message for "Patsy" and not the "Pat" (gentleman) that he speed dialed- it went to the wrong person. The message said, "Check your husbands phone, he's calling my wife again." And that ain't a rumor. We heard it loud and clear. Our relative didn't know who it was until he called back the number to verify the message. How embarrassing is that? And she has no defense for that because I don't even think she knew that he did that! Now what? But yes, I agree, Mel is very rude!

Mel has been one of the best councilpersons all around. He's got my vote over the whiner Bynam.

Shay never show up for the radio showdown. What's really up with that?

"Shay never show up for the radio showdown. What's really up with that?"

Did they not say on the radio?

She had to work. Must've been an important cold case.

Anonymous 11:47 and 11:50 - as the poster presented, this was NOT a rumor, but a statement of alleged fact direct from the source.

I get so tired of people wanting to stuff crap under the carpet because it's disturbing to deal with.

It's not gossip...it's the truth, whether you like it or not!

Best Council Member around, too bad you couldn't say that about him as a cop!

All that crap about the affairs of celebrities and athletes may be the truth but it's still gossip. As long as it's about the personal stuff like that posted on October 25, 2012 at 4:57 PM, it's gossip. The b.s. that they do while on the job is what's important.

And they do that crap on the job...the bullshit! So they need to fucking get out!