Following the planning department's unauthorized inspection of his house, Councilman Tim Bynum filed a police report, in which he asked the cops to conduct an investigation into whether inspectors Sheila Miyake and Patrick Henriques had trespassed onto his property. I checked with the cops, asking what ever happened with the report, and got this response:


[T]his report remains under police investigation so details cannot be released at this time. Once the investigation is complete it will be sent to OPA. KPD has no timeline of when this might occur.

Meanwhile, the statute of limitations has expired.... I guess they were unable to find probable cause despite Sheila's own admission —secretly taped by former first deputy prosecutor Jake Delaplane — that  former deputy planning director Imai Aiu and county attorneys had raised concerns about her trespassing. As you may recall, Tim faced misdemeanor criminal charges, which were later dismissed, based on Sheila's claim that a rice cooker, as opposed to an installed range, comprised a kitchen, and thus created an illegal multifamily dwelling.

In 2009, planning inspector Bambi Emayo found an illegal multifamily dwelling when he inspected Hale Pohaku, a luxury vacation rental in Wainiha. He noted the following use violations: two kitchens and lockout separating single family residence into two dwellings. One of those units was on the ground floor, which had been enclosed within the flood zone. The violations were confirmed in a subsequent inspection a month later.

But the owner, Tom Brooks, was not charged with any crimes. Instead, he was rewarded with a nonconforming use permit for his vacation rental — a permit that was initially denied, based on the violation. A permit that was later quietly granted,  even though the current web ad for the vacation rental, which has been renamed Pohaku House, makes no bones about it still being a multifamily dwelling:

How is such a thing possible? It seems that when it comes to inspection and enforcement, the county has several categories: regular folks, regular folks with connections, political enemies, and rich people who want to operate a vacation rental.

In April 2011, I published an extensive two-part series on Hale Pohaku on my other site, PIKO. In part one, I outlined how Brooks miraculously transformed a 30-year-old beach house into a luxury vacation rental — an entirely new use with a now fully enclosed downstairs and an additional bedroom, bath and kitchen — using a building permit issued for $60,000 worth of “unsubstantial improvements.” As a result of that “unsubstantial designation,” Brooks never had to upgrade to a septic, and the beachfront TVR, which sleeps 8, continues to use its original cesspool. Here's the photographic evolution of that “unsubstantial” construction: 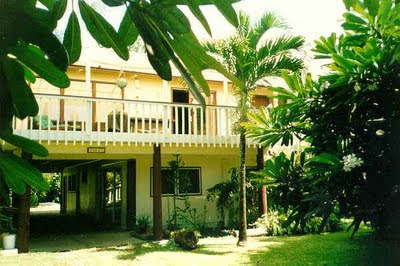 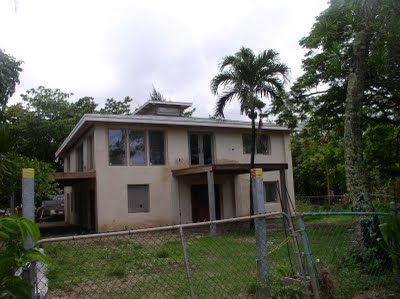 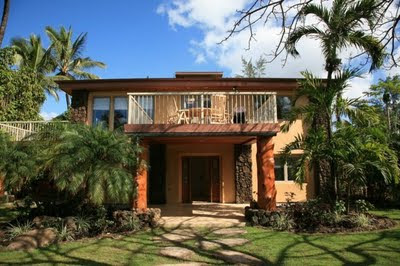 In part two, I detailed how planning staff had recommended the planning commission grant non-conforming use permits to operate transient vacation rentals to Hale Pohaku and 29 other properties. When citizens presented details about the Hale Pohaku violations — information that had been submitted to the department months earlier — it resulted in a conversation between staff and commissioners that is quite revealing, and well worth a read.

As a result, Hale Pohaku's permit TVNC-1914 was denied, as well it should have been. Aside from the use violations, the owners had failed to submit documentation that the house was in use as a TVR for 30 days prior to 2008. Under the law, such documentation was to include proof of paying general excise and transient occupancy taxes, reservation lists and payment receipts.

The only “proof” offered was a lease showing cash payment for rental Jan. 9-20, 2007 — a time when the house was under construction. In the original sales listing, it was disclosed that the house previously had not been used as TVR. Brooks' application also presented it as a three-bedroom house with "work space," though it was being advertised on the Internet as having either four bedrooms and four baths or a "lower suite" with two twin beds, kitchen and bath.

In 2010, the County Council amended the TVR law it had adopted in 2008. Brooks re-applied. An unsigned, July 13, 2010, field inspection report references a meeting with Brooks' representative. It notes:

Previously existing cabinets and appliances have been completely removed. Note: workroom furnished as a bedroom.

On April 12, 2011, Brooks submitted an affidavit in support of his application in which he swears there “were no expansions, alterations, improvements, or uses contrary to State and County land use and planning laws” — despite the record of violations noted in Bambi's October 2009 inspection.

In May 2011, the planning department acknowledged receipt of Brooks' “completed” application for TVNC-4291, though full documentation of prior use had not been provided. No reference was made to TVNC-1914, and its previous denial.


An undated investigation report by planning inspector Vill Balisacan noted that a field inspection of Jan. 14, 2009 was recorded on the county TVR log, though no records of that inspection or its report were found. Vill also noted the first application was considered denied on March 30, 2009. Yet he goes on to write:

Based on the applicants prior use as a vacation rental and permit history it is recommended that the nonconforming use certification (TVNC-4291)...should be issued and the use continued....

Hey,
Last time I checked there is an equal protection amendment to the US constitution (14th amendment). Guess it does not apply on Kauai.

These people are renegades - they don't care about some law from Washington.

Half of them can barely tie their own shoes.

And guess what happened this morning when discussion of all this came up on the council agenda? After a few brief questions were deflected by Dahilig and the county attorney, they went into executive session to discuss it without public scrutiny (Hooser and Rapozo voting against)Supposedly they will come back and discuss it in public this afternoon- yeah, right

And this is only the tip of the iceberg Joan. Keep on going because I sure you have enough violations to provide you with a years worth of chronicles, if not more. We know the Council members and the Mayor read your blog. Lets see how they scramble out of this shit.

How long and how much trouble was it to get this PUBLIC information?

I have a feeling that this administration was not ready, willing or able to give out public documents even though this information should have been posted online for all to review prior to giving these owners the golden tickets.

Racketeer Influenced and Corrupt Organizations Act (RICO) is a United States Federal law that provides for extended criminal penalties an civil cause of action for acts performed as part of an ongoing criminal organization.

These individuals are all GUILTY in ordering and assisting in the crime of Rackets and the department of Justice will be notified.

My guess is the corruption runs deep. Planning commission, county council, etc. You will hit road block after road block on this. 'They' will make it sound like they're concerned but they're the ones who really know what happened. Hard untraceable cash likely got that permit and many others.

based on Sheila's claim that a rice cooker, as opposed to an installed range, comprised a kitchen, and thus created an illegal multifamily dwelling.

This is so shamelessly inaccurate! No relevant law says anything about stoves. The law says a kitchen is a room used as a place to prepare food. How can you have any self respect and continuously deny that there was also a full size fridge, cooking utensils, kitchen sink and cabinets in there, in addition to "a rice cooker." Don't you have any concern at all for your credibility as a "journalist"? Don't you have any shame?

Maybe Joan's home needs an inspection. She might have a toaster/oven out of place.

Prosecute them! Oh wait, they're haole.
Shame them on a blog!

Interesting how other municipalities can define a kitchen and Kauai has such a 'difficult' time.

The zoning laws define "kitchen" as a place where food is prepared and cooked, not just prepared. Hence, Joan's reference to a stove. The former prosecutor and her hapless first deputy, along with the former hairdresser, and certain blog commenters, can't read. That case against Bynum was politically motivated.

By Kaipo Asing! And carried out by his loyal minions...AKA the 'hairdresser'.

so every carport - including one of our state senators is a kitchen - great.

It is very sad to see such important issues relegated to personal attacks on these staff people. Do you all know them personally? I know some of them, both professionally and personally. The majority have family here for generations. Why would you think they would want to screw up the island? I know for a fact that Bambi is studying to be a deacon and is active in his church and in youth sports. I also find that the musings on this site is one-sided and mostly assumed or poorly stiched together pieces of actual goings-on. What a waste of reading...

When they came at Bynum Kaipo was still Council Chair. He and Shayi were the ring leaders. Some county people were willing co- conspirators (Miyaki) some just went along (Costa).

so true 9:23am at last someone who is not a coward that respects locals. These cowards need some slaps.

That is so pathetic. Respect the locals when they can't/aren't doing their jobs?

I don't know about Kauai, but here on the Big Island, a "kitchen" is defined by having a full-size sink and a stove.

Bar-size sinks and any other portable cooking appliance not defined as a "stove" can be used.

But, then, here on the Big Island, nobody cares. People get their permits (if they have them at all) final-inspected and passed, then install the full size sink and stove.

Nobody cares. Lots of inspectors don't care either and will pass a non-conforming kitchen. Some will sign off without even entering the building.

With a few exception in that department, they don't know what they are doing and don't care either.

Good for Deacon Bambi, that has nothing to do with his inability to do his job as a planning inspector nor his personal after work habits...

My father was a deacon. And a wife beater and an alcoholic.

So every garage and lanai is illegal on Kauai if you cook?
Only for haoles and those who won't pay the bribes.
The Planning Department was told repeatedly they were idiots for thinking such. In writing. So Sheila hurried before the change in administration.

Yes, she did. She wanted to appease her Captain of Corruption, AKA Kaipo.