As GMO opponents take to the streets, the biotech industry is snuggling up with lawmakers on the Senate floor.

Just two days after 1,000-plus Kauai residents marched in the rain to denounce GMOs and demand a hearing on a labeling bill, the state Senate honored mainland farmers who grow GMO crops and the man who invented Hawaii's GMO papaya.


Monday's presentation on the Senate floor was a full-on public relations ploy staged by the biotech-based Hawaii Crop Improvement Association and Hawaii Farm Bureau Federation, with the assistance of Sen. Clarence Nishihara, chair of the agriculture committee.

Which explains why Nishihara hasn't scheduled a hearing on HB 174, the only GMO labeling law that is still alive, though a dozen or so good ones were introduced. It's a measly little crumb — or more accurately, a dingleberry — that the House has thrown to the vast majority of Hawaii residents who support labeling.

And even that crappy law is stalling in the Senate because Nishihara is tight with the biotech industry, which doesn't want any labeling at all.

On Monday, Kauai Sen. Ron Kouchi, vice chair of the of ag committee, joined his colleagues as the Senate recessed to “meet and greet our honored guests.” 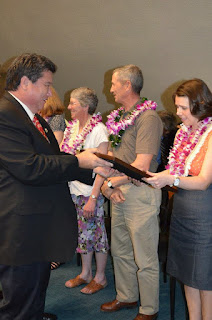 The "honored guests" were farmers from Illinois, Oregon, Illinois, North Dakota and Washington who had won an essay contest. As I reported in both the Honolulu Weekly and this blog last November, the biotech industry invited mainland farmers to write about how they'd benefitted from genetically modified seed.

The prize: a free trip to Hawaii. The catch: they had to be shills for the biotech industry, sharing their stories with legislators and media.

That's what went down on the Senate floor on Monday, with Nishihara reading a speech — you can watch the video here — that expressed unqualified support for the biotech industry:

In trying to reach our state's goal of a secure, sustainable and affordable food supply, the agriculture industry will need to utilize all farming methods and technologies available, whether it's organic, conventional or biotech.

Nishihara went on to say:

There are over 5 million farmers on 1 million acres of land across the nation that grow GE crops such as corn and soybeans. Many of these crops can trace their origin back to Hawaii-produced seeds and farmers across the U.S. appreciate and acknowledge that Hawaii plays a vital role in production of seed for the entire world.

These outstanding farmers benefit from the use of seed crops developed and grown here in Hawaii. They successfully grow organic, conventional and biotech crops under family-owned farms and they traveled to Hawaii to share their stories about how biotechnology is helping real farmers deal with real agricultural challenges to ensure an affordable food supply.

The “story” got picked by KITV, which did a Tuesday morning segment that devoted 1.5 minutes to the anti-GMO message — photos of the Kauai march and an awkward pro-labeling comment from a Babes Against Biotech spokeswoman — and 3 minutes to the essay contest. It included an interview with a Washington farmer who grows Bt corn on his otherwise mostly organic farm, and spoke against labeling.

The capper? The farmer had brought in a plate of food that the TV hostess spun around on the table, as the cameras did a closeup. After saying that "a lot of GMO products are grown locally, too," which is not true, the hostess described the entree as  sesame-crusted grilled ahi steak topped with a salsa made from pineapple and GMO papaya.

“It looks delicious and I'm sure it tastes good, too,” she gushed. “I'll be getting to that during the break.”
Posted by Joan Conrow at 9:00 PM

So they won a contest and a trip to hawaii was the prize.
I feel really sick about the willingness of all of these people to party, decorate each other with leis, and destroy life on earth.

Who does Kouchi represent? Obviously not Kauaians. He's pandering to mainland farmers NOT Kauai farmers in this photo. AND what about that fundraiser he's having in Los Angeles of all places?! Who's money is he taking and who is beholden to? See link here:

And there you go. The writing is on the wall. I really don't care if this labeling bill fails, its a joke of a bill. I am thoroughly disgusted with our Senators in particular Kaua'i's own. Forget labeling, lets refocus our efforts to get these chemical corporations masking as agri business, off our 'aina. Our politicians are obviously in cahoots with corporations and the only way to affect change is the power of our pocketbooks and a massive grassroots effort to get rid of these politicians.

We need new blood to run for office and get rid of Kouchi, Tokioka and Kawakami! Dustin Barca you interested? Young generation needs to step up!

Dustin Barca? He wouldn't even beat Bob Cariffe. You guys better sober up, too much drugs with your organic food.

So much for a representative democracy.

Dustin represents the next generation of young, concerned parents who care about the health and safety of their children, 'ohana and the land that supports them. If he could mobilize that generation to participate in politics, whose to say he couldn't win. I'd vote for him, despite his inexperience because I know where his heart is. The three men who supposedly represent us today, I have no faith, trust or hope in. We need a true leader, who isn't invested in the status quo, who is not afraid to buck the entrenched establishment which Tokioka, Kouchi and Kawakami represent.

Kouchi, Tokioka and Kawakami are a joke.

I'll vote Barca! Get out Kawakami, Kouchi and Tokioka!