Found a Newell's shearwater late yesterday afternoon, being guarded by a friend's Golden Retriever, who wasn't biting or mouthing, but just keeping watch. I crawled beneath the house and wrapped it in a towel: no blood, wings intact. I have no idea why it came down, or if it was leaving the burrow, having been relieved from egg-sitting duty by its mate, or heading in to take its turn.


It spent the moonlit night in a cardboard box, where it didn't want to be — who would? — scratching at times to get out, but responding always to a soothing voice: don't struggle. Words we all can live by. 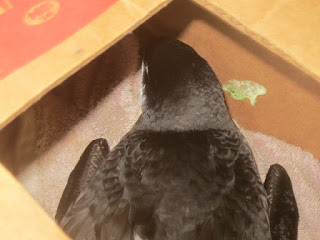 This morning it's enroute to the Humane Society, which is a long ways from Wainiha, where it was found, but they don't put out the little aid boxes at the fire stations until September.

Hopefully it will be released soon, so it can do its part in hatching a chick this season. At least it's alive, with no visible injuries, unlike all the other A'o I've found over the years.
Posted by Joan Conrow at 8:16 AM

Thats great Joan. Its always good to help the little animals.
God bless you and namaste, peppered in aloha.
My thoughts go out to the small bird.

Thank you for caring for the bird and making the long trip to the H.S.

I wish yu would run for office and get your friends to run too. I doubt our current council chair, or mel rapozo, or bynum, or castillo, or dahilig, or ian costa or darryl perry would ever stop to help a defenseless suffering bird like you did.

and we need people like you in government. People who care. Not these angry men who can't ever work collaboratively and only help their own power base.

Those birds are useless. It always has been, and always will be...

Thanks for the support, folks. The bird is now at KHS and they said it looked lively, so that's a good sign.

As for their usefulness, well, aside from their intrinsic value as another component in the web of life, they traditionally served to guide the early voyagers to land and directed kanaka maoli to schools of fish. And they also played an important role in fertilizing the native forest.

"Those birds are useless. It always has been, and always will be..."

"Those birds are useless. It always has been, and always will be..."
Not as useless as a night football game, a rainbow warrior or the extra billion people on the planet and 20,000 on the island...

Anon 10:03 AM: Your mana'o is "useless". The 'A'o on the other hand are magnificent creatures that can dive to depths of 150'. Here long before man they have served as beacons for early voyagers directing our ancestors to land and schools of fish. Your statement speaks to your ignorance.

Your manao is useless picking birds over our youth. And the main problem is actually rats and feral cats eating all the chicks and the eggs. The lights and electric lines cause very limited deaths. Move back if you guys so unhappy.

Maybe teach your youth the value of your ancestors and their respect for the land and environment instead of some western violence sport.

As a mother of five and grandmother of 2, they are my treasure. I teach them to value all living things, not just humans. I teach them to respect and malama the land and sea and all things within. My sons played football growing up and as a family we experienced many Friday night football games. If my sons were playing today I would support a move to day time games if it meant protection of the 'A'o from extinction and I would teach them the value of that. BTW...my daughters soccer games were usually scheduled in the heat of the mid day and it wasn't a big deal. If I'm not mistaken, Pop Warner games are during the day as well. Surely High School football players can man up.

If you like screw with our ancient native sport of night football, then move back to the mainland haole. Screw nature, natives didn't care about that. Its cock fighting, abandon cars and football we kauai locals love! Kagawa for Mayor!

Ten year old girls can play soccer in the midday sun but high school boys can only play football at night? Precious, fragile creatures. Protect them at all costs.

All you cowards should go to a KIF football game and tell the locals all the b.s. that you write about their kids. You would get some slaps. Talk is cheap. As all you guys good for.

You're making the incorrect assumption that all people who read/post comments here are haole/newcomers/transplants. You're mistaken. Joan has local fans, myself included. Not all locals think we have to make a choice between us and the birds. The better lesson to teach our children is to co-exist with living creatures that make Kaua'i unique and beautiful. Playing football at night isn't life or death for us, but it is for the 'A'o. Too bad incompetent, negligent county officials sat on being compliant with the feds until a lawsuit was initiated. They could've changed the light fixtures at the stadiums years ago but refused to act. So the outrage gets misdirected towards the poor birds who are dying at an alarming rate instead of government officials, in particular our Mayor who was in Parks and Recreation at the time.

anyone is better than the one we have right now. His annual staff party devoted a whole department to make fun of the federal compliance requirement when in violation of federal environmental protection laws - too bad it was the county attorney's office and parks departments.

How about some details May 25, 2013 at 10:07 PM ? I'd like to know what exactly what happened when the mayor "devoted a whole department to make fun of the federal compliance requirement when in violation of federal environmental protection laws."

Kauai should contact the law officials in New York. Since 2010 the State of New York has 10 state officials in JAIL for the same things Kauai's GOBAG officials are doing every day all day.


Time to send them all to FEDERAL PRISON.