How much are the Hawaiian monk seals themselves being considered in the effort to protect them? I wondered while studying this photo in today's newspaper.

I've watched a lot of monk seals, and they like to roll in the sand, snuggle right into it, shimmy around on their front, back, all sides, and in the water, slither eel-like through narrow crevices in the reefs.

Hard to do with a big ass video camera epoxyed behind your head by a team of men that steal upon you while you're snoozing on the beach, throw a net over your head, hold you down, sedate you, attach a bulky surveillance device, take blood and tissue samples and swab your orifices, leaving you groggy, sore, disoriented, tracked and targeted for a repeat abduction when it's time to retrieve the device. 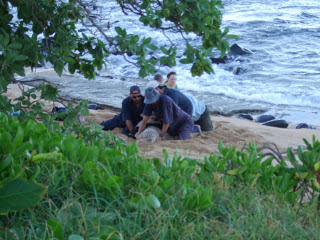 All in the name of saving you.

The scientists know this critter-cam stuff is potentially harmful to these critically endangered species, which is why, according to this blog post by federal seal researcher Charles Littnan, they passed up a possibly pregnant mother on Molokai. Instead, they picked a male that watchers had profiled as "a bit of a nuisance to his fellow seals" and thus apparently more expendable.

They justify the intrusions in the name of saving the species, which most recently has been defined as using the video footage to “enchant and inspire” people to save the seals, as in endorse what feels like a pre-determined decision to transport young female seals down here from the Northwestern Hawaiian Islands, where just 20 percent reach adulthood. After a few years, they'd be rounded up and taken back, each trip a weeks-long voyage that Littnan acknowledged is extremely stressful and occasionally lethal.

All in the name of saving them.

As The Garden Island reported, in covering a recent screening at the Grand Hyatt of footage from the critter cams:

Don Heacock, an aquatic biologist with the state Department of Land and Natural Resources on Kauai, questioned why NOAA and National Geographic would want to focus their research in the MHI, where the population of seals continues to thrive, instead of in the NWHI.

Littnan said the population here is still considered endangered and that much of the research being done here is population assessment. In addition, local fishermen are interested in knowing what impact the animals are having on the fisheries and environment.

True, but the truer answer is it's part of a public relations campaign to build support for the seals, in this case, apparently, with folks living outside of the Islands. Evidence the resort screening, which reportedly attracted about 150 persons, primarily tourists and monk seal volunteers, and just three identified ocean-users.

The footage is also supposed to convince local fishermen that the seals aren't stealing their catch, though that's about as likely as convincing anti-GMO activists that stinkweed made the westside school kids sick.

Littnan took care to note that for every fish a seal caught it passed up 300, and a National Geographic video stresses that the seals prefer to forage beyond the reef, where fishermen are less likely to be.

But the seals apparently forage primarily at night, so none of that behavior is recorded on the critter cams, making the footage of questionable value as a feeding study. And Littnan said the seals fed on just 26 of 1000 forages. Could that indicate the cameras interfere? Or do they even consider that perhaps their approach could be skewing results?

At any rate, the local fishermen that the feds supposedly hoped to attract were reportedly nowhere to be seen Tuesday night, and none signed up for “interviews” with NOAA.

In other words, even though at least eight seals have been seriously messed with in the process of obtaining this footage, the gulf remains unbridged between fishermen and the federal scientists in the Main Hawaiian Islands.

I have no doubt the scientists are well-intentioned, though this does not mean they are not also considering their own interests, in terms of keeping their research funded and careers moving forward. Nor does it mean that they doing the right thing by the seals.

Which is why the questions nag at me: What about the seals? Can this critter cam stuff really be in their best interest, especially since the fishermen aren't even watching the footage? How much harm and trauma are we inflicting in our attempts to save the seals from us, even as we ignore the bigger issues of climate change, over-fishing, habitat degradation?

Isn't there some middle ground between allowing them to go extinct, and managing them to death?
Posted by Joan Conrow at 12:05 PM

And they're protecting you be recording your phone calls.

epoxy? if the seal tries to scrape that off on a rock or reef and a chunk of meat went with it and then the seal bled to death or became shark attractive, would the 'scientists' be prosecuted by the fed law for killing an endangered species ? and wheres PETA ? and when they try to get thier camera back, how do get the epoxy off ? surgery ? shit, i have a hard enough time getting that stuff off of my fingers....and what if another seal of the opposite sex thinks the camera looks ugly and doesnt want to get it on with a freaky looking mutant seal... if my girlfriend had a camera epoxied to her back, i wouldnt want to f**k her either....aloha Dean

Pflueger and Kauai syndicates gets away with MURDER.

...and why does the local media fall for her "image-rehab" project?
she is as responsible as pflueger for each of those deaths -- she quashed the good public servant who tried to correct him. how can she sleep?

I must be missing something. It appeared to me that this article was about monk seals and the "management" protocols.

Anyway...it's not hard, if you're a scientist, to get excited about critter-cam footage. The real problem, though is as Joan posits...what about the seals? It really does sound like pure PR stuff, and I don't agree with the methodology, because no amount of critter-cam footage is going to change the mind of a seal hater.

They need to be federally charged and do five years like the fisherman.

Yep, so how do they compensate for that alien growth on their backs when trying to slither thru areas. They get stuck.
So the seal whisperers will be there to dislodge them? I doubt theyʻll interrupt cocktail hour to get in a boat and go track down a trapped seal.

Or worse yet, the seal will force itself thru a crevice ripping the cam and flesh off.

Thanks for bringing this to light, Joan.